Accessibility links
Eliza Gilkyson and a Dog Named 'Tootsie' The daughter of successful songwriter Terry Gilkyson, Eliza is a third generation musician who grew up in Los Angeles knowing that her life would revolve around music. Hear the Grammy-nominated singer-songwriter in an interview and performance from Folk Alley. 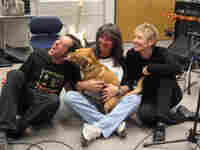 Ive seen Eliza Gilkyson with a trio, a full band, and as part of a Woody Guthrie Tour. Her careful choice of subject matter and words to convey her messages makes her one of our top artists. I was delighted to hear that she was willing to drive out of her way to pay us a visit -- and that this time around she was bringing Nina Gerber. Nina doesnt sing, but she has played lead guitar for Kate Wolf, Jackson Brown, Bruce Cockburn and dozens of others. Her years of experience have taught her when to step forward with flair and when to lay back and fill between the singers phrases. If you think about it, most lead guitarists are men, so Gerber is a bit of a loner -- but she relishes the role. 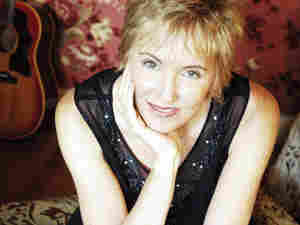 When there are only two in the band, theres no where to hide. Full bands, through mere numbers, can cover a singers words or a guitarists leads. I was anxious to see if they would take risks. The microphones and guitar effects were all in place. The rental car pulled up… and out jumped three. Who was this third wheel? I was all geared up for a duo. My mind was prepared for the moments where they would push each other to excel. At first, I thought maybe they had brought along a road manager -- until she drew closer and peed on the bushes. Then I saw the fur and four legs. Actually, it was hard to see the four legs, because Tootsie is part corgi. I relaxed. A duo did arrive, except Nina brought her dog!

I think we have some sort of rule about no animals in the building, but Tootsie didnt know about that rule and in she pranced. Our artists began warming up, and Tootsie warmed up to me. I stooped down to her level and drew close so she could get a good look. After eyeing me closely for a few moments, I received the biggest and most sudden French kiss of my life. Either Tootsie has bad eyesight or she was in that car for too long! Amidst the laughter in the room, all I could think of was that Woody Allen movie where a woman he barely knows makes a pass at him and he suggests that she take it more slowly, maybe with some flowers or a box of chocolates. Surely my face was red, because Im married after all... to three other dogs. Oh well, sometimes women just cant resist.

The moment loosened up the entire room, and Gilkyson and Gerber knew that they could feel at home. Youll be able to tell in their playing, and in Gilkysons responses to my questions, that they were comfortable and willing to dare. Thats what I was hoping we could capture, for you to hear. Now, if youll excuse me, I feel compelled to brush my teeth.