Accessibility links
Scientists Create Embryonic Stem Cells from Skin Two teams independently discover a way to turn ordinary human skins cells into stem cells with the same characteristics as those derived from human embryos, a breakthrough that could open the door for advanced medical therapies.

Two teams independently discover a way to turn ordinary human skins cells into stem cells with the same characteristics as those derived from human embryos, a breakthrough that could open the door for advanced medical therapies.

Joe, what exactly did these scientists do?

YDSTIE: Well, they act like stem cells, but are these cells really the same as embryonic stem cells?

PALCA: Well, this work in humans is very new, and there are still a lot of comparisons that have to be made between these cells and human embryonic stem cells, but there's been a lot of work in the last year. These cells were also created using mouse cells, starting with mouse skin cells, and the comparison between what you get from a mouse cell that's transformed this way and an embryonic stem cell, they look to be very similar. So there's every hope that these will be, if not perfectly identical, then identical for the purposes of studying and possibly therapy.

YDSTIE: So does this move us any closer to the day when embryonic stem cells can actually be used for therapy?

PALCA: But even avoiding the immune problem, I mean nobody has exactly figured out how to use embryonic stem cells or these cells for therapy yet.

YDSTIE: But does this really end the whole ethical debate over stem cells?

PALCA: And the other issue is that, for the moment at least, getting these magic factors into the skin cells requires using viruses, retroviruses, some other things that you don't want to put in cells. I mean, basically, there are indications that some of these things can and have caused cancer in gene therapy experiments. So right now it's not something to belittle. There are technical hurdles and they have to be worked out. But scientists are confident they will be. 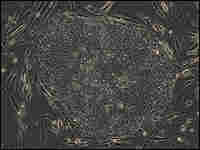 Genetic modifications in skin cells (above) induced the cells into what scientists call a pluripotent state — a condition that is essentially the same as that of embryonic stem cells. Junying Yu/University of Wisconsin-Madison hide caption

Two teams of scientists have independently discovered a way to turn ordinary human skin cells into stem cells with the same characteristics as those derived from human embryos, a breakthrough that could open the door for advanced medical therapies.

If the work holds true to its promise, it would largely bypass ethical issues that have dogged research on human embryonic stem cells. It could also allow scientists to tailor the cells to specific individuals, eliminating the possibility of rejection.

The crux of the discovery, published online Tuesday by the journals Cell and Science, is a "direct reprogramming" technique that adds a cocktail of four genetic factors to run-of-the-mill human skin cells.

The discovery builds on work presented in 2006 by Yamanaka in which the same technique was demonstrated for skin cells from mice.

The two teams have been able to isolate cells that look and behave like embryonic stem cells. The researchers caution that there are still many steps to take before the cells are useful for human therapies.

Yamanaka said he knew that the real payoff would be if his work on mouse cells could be translated to human cells.

"We started working on human cells more than a year ago, but in the beginning, the four factors didn't work," he told NPR.

He said it was unclear whether the cells he produced from skin were identical to embryonic stem cells, but "all I can say is they are very similar."

While Yamanaka was working on mice to find the critical factors for transforming skin cells to embryonic stem cells, Thomson was already working on human cells. His team also reports four factors that can transform skin cells, but two of them are different from those Yamanaka found.

"It does seem that there are multiple paths to the same outcome," Thomson said. "How divergent those paths are remains to seen."

Thomson, 48, made headlines in 1998 when he announced that his team had isolated human embryonic stem cells.

Since then, the research has pitted groups that question the ethics of harvesting stem cells from human embryos against those that hope the line of research could result in important medical breakthroughs. The latest announcement from the Japanese and American teams could skirt the controversy.

"It changes everything in that these are not cells derived from embryos anymore," Thomson told NPR. But "we are back at the starting point now. These biologically ... appear to be the same as embryonic stem cells, and we still have to figure out how to differentiate them into useful things."

The whole idea of stem-cell based therapies is that the stem cells could be used to replace or repair cells damaged or destroyed by disease or injury, such as new heart cells for people who have had heart attacks or new neurons for patients with Alzheimer's disease.

"This is a huge deal," said Jose Cibelli, a researcher at Michigan State University.

"Anybody can do this procedure. It's a very simple recipe," he said. "A combination of three or four genes, and in a couple of weeks, you go from a skin cell to an embryonic stem cell. It's remarkable."