Excerpt: A Breath of 'Hot Air'

Excerpt: A Breath of 'Hot Air' 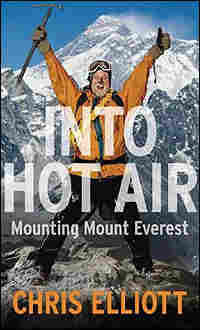 Elliott's new novel finds him journeying to the roof of the world. And beyond. Weinstein Books hide caption

This excerpt is reprinted with permission from Chris Elliott's new novel, Into Hot Air: Mounting Mount Everest, from Weinstein Books.

One month earlier, Grandpa shuffled into the kitchen, clutching a large framed portrait in his arms.

"Here's the last known photograph of your great-uncle Percy."

"Well, hello there, Mr. Handsome," I said, studying the black-and-white photo. "I can definitely see a family resemblance." The intense-looking man in the photo was in his early fifties, sporting a salt-and-pepper beard and a stern expression. He was also covered in tar and feathers and wearing a lady's wig.

A steam of tears moistened Grandma's cheeks. "Poor Uncle Percy. How I miss him so."

"Your grandmother is so grateful that you're going to finally bring Percy back to Brooklyn Heights, where he belongs. . . . You'll be leaving soon, right?"

Stalwarts of support, my sweet grandparents seemed especially eager for me to climb the tallest, most dangerous mountain in the world. I suppose they were just anxious to get me out of the house. After all, I had been living with them ever since the breakup with Vera (and actually quite a bit during the marriage itself).

"That's right," whimpered Grammy. "They're tears of joy," and she leaned over and gave Gramps a little peck on his cheek.

"Eewww! Get a room, you two!" I said, averting my eyes. "As a matter of fact," I continued, "I don't even have a clue how to get started. I mean, don't you need a guide or something?"

Through her tears, Grammy said, "Oh, I cut this out of the Pennysaver for you." She pulled a clipping from her apron.

"Classy," said Gramps, pulling on his suspenders as I read on:

If you dream of exciting exploration ... One of our trained professionals will be happy to guide you and your friends up Mt. Everest — the tallest mountain in the world, in case you haven't heard. There you can stand at the apex of our planet, 29,000 feet into the stratosphere ... look around and ... take a couple of snapshots or something. If you think you have what it takes — mainly the cash — then hurry in and meet our friendly, licensed mountaineering experts at Mountain Maniacs magnificent corporate headquarters, located just half a mile west of Route 9, adjacent to the Woodbury Mall, right behind the Carpet Warehouse.

"So you can leave now, right?" Grammy asked.

"Too bad this is way over in Jersey. You guys know I'm still not allowed to drive."

"Yeah, but won't I need climbing equipment or some — "

"Gotcha covered," Gramps said, throwing a tarp full of junk on the table. "Cleaned out the garage. You got Christmas lights, brake fluid, bicycle pump, rat poison, and a box of six-penny galvanized nails. Everything you need."

I mused out loud, "Do you 'spose it's very much like Brooklyn? Mount Everest, I mean."

My grandparents rolled their eyes behind my back. (You may be wondering how I knew that since it was ... behind my back. Well, their dry old eyeballs make a very specific sound when they roll. It kind of sounds like someone whispering, "Our grandson's an idiot.")

As I gazed through the greasy window to the bustling street below, I continued to cogitate. "I mean, people are people all over the world, right? 'The child is black, the child is white, together we learn to ... bite the bite.' Does the moon not shine over Bangladesh as well as Brooklyn Heights? Oh, dear, sweet Savior, what invisible power compels me, as it compelled my great-uncle before me, to confront its staggering countenance? Perhaps to truly understand, we must first go back to my childhood and answer some of the lingering questions that only ..."

"Okay, well, look, Chris ... ah ... it's about time for your Grandmother and I to start drinking, so maybe you should be on your way, huh?"

"Yes. Yes, you're quite right, Gramps. There'll be plenty of time for us to debrief upon my return. So, as the Katmandu locals say, adios, amigos!" 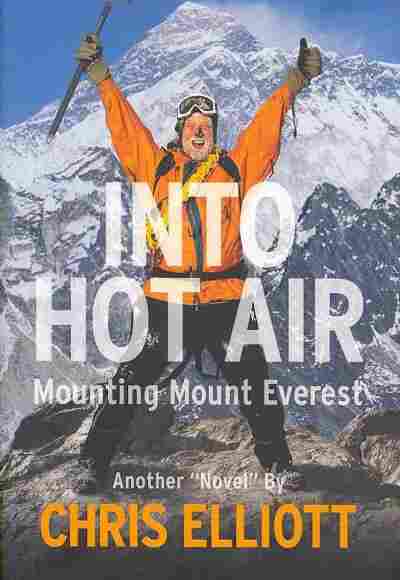