Accessibility links
A Thanksgiving Feast With Handel What happens when a good feast goes bad? Find out in Handel's Oratorio Belshazzar, the tale of an arrogant Babylonian King and his demise. Kent Tritle conducts Handel's gorgeous music in concert at the Church of St. Ignatius Loyola in New York. 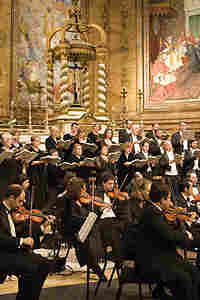 The Chorus and Orchestra perform at the Church of St. Ignatius Loyola, in New York City. Laurie Lambrecht hide caption 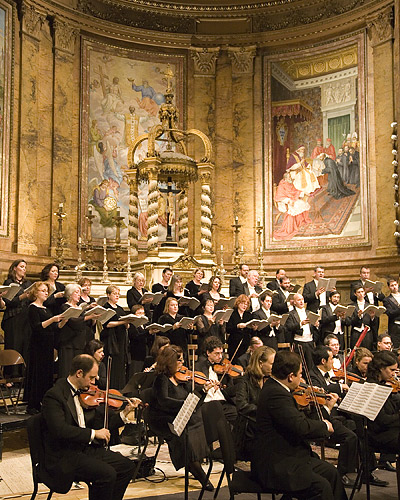 The Chorus and Orchestra perform at the Church of St. Ignatius Loyola, in New York City. 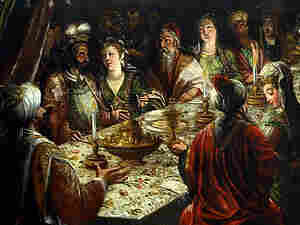 The Biblical story of Belshazzar's Feast gets a musical retelling by Handel, in concert at the Church of St. Ignatius Loyola, with conductor Kent Tritle and the St. Ignatius Orchestra and Chorus.

In the early 1740s George Frideric Handel was still the toast of London. He'd spent the last two decades writing and producing Italian operas in his adopted hometown to great success. But times and trends changed. Rival opera companies sprung up, and the taste for Italian opera was on the wane.

Beginning with the success, in Dublin, of his oratorio Messiah, Handel knew he was on to something. Instead of Italian opera, he began writing English language oratorios using dramatic texts from the Bible. The new works sounded like operas—with Handel's dazzling arias and recitatives—but were easier and cheaper to produce because they were not fully staged.

Versions of the Belshazzar's Feast story can be found in the Old Testament, in the books of Daniel, Jeremiah and Isaiah.. Handel's librettist Charles Jennens (who wrote the text for Messiah) also drew from additional sources, including the Greek historian, Herodotus.

Handel was pleased with Jennens' work, as he made abundantly clear in letters to Jennens in the summer and fall of 1744. After Jennens sent the text for act two, Handel wrote back, describing it as "a noble piece, very grand and uncommon. It has furnished me with expressions and has given me opportunity to some very particular ideas."

Handel finished the music in late October and the premiere was given at the King's Theatre in London on March 27, 1845.

The Story of Handel's Belshazzar

Handel's oratorio highlights the arrogance of the Babylonian king, Belshazzar, who meets his end during a decadent feast.

Act One: The story is set in and around the walled city of Babylon in the year 538 B.C. The Persians, led by Cyrus, have been attempting to take the city by siege to liberate the imprisoned Jews.

Belshazzar's mother, Nitocris, laments over the moral decay of kingdoms and their rulers. The Jewish prophet Daniel cautions her not to question the will of God.

Meanwhile, Cyrus tells Gobryas (a Babylonian defector) about his plans to conquer the city, revealed to him in a dream. The Euphrates River will be diverted, leaving a dry riverbed and easy access into Babylon. Belshazzar and his men will not notice the diversion as they are already busy celebrating the Feast of Sesach.

At the party, Belshazzar scoffs at his mother's request to show a little respect to the captive Jews. Instead, the king insists that his guests drink from sacred vessels looted from the Temple of Jerusalem.

Act Two: The diversion of the river has been a success, and Cyrus leads his forces into Babylon. At the feast, Belshazzar challenges the god of Israel. Suddenly, a mysterious hand appears, writing three unknown words on the wall. No one can decipher the script except the prophet Daniel, who reveals its meaning: The king Belshazzar shall fall. Nitocris urges Belshazzar to repent, and as he refuses the chorus of Persian warriors is heard.

Act Three: The feast is interrupted by a messenger announcing that Cyrus and his Persian forces are now within the palace. A drunken Belshazzar gathers his men to meet Cyrus and is killed. Nitocris submits, but Cyrus asks her to think of him not as an enemy but as her son. As a chorus of captive Israelites celebrates victory, Cyrus promises to rebuild the temple in Jerusalem.