Accessibility links
Sports and Politics: Mitt Romney Is Derek Jeter How does Barack Obama resemble Roger Federer? What about Mitt Romney and Derek Jeter? With just a few months until the first votes are cast in the 2008 presidential race, commentator Frank Deford compares the candidates to well-known sports figures. 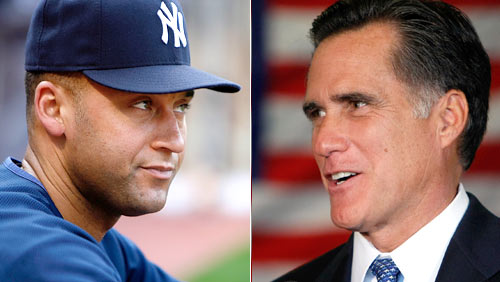 How do politicians resemble sports figures? This is our usual quadrennial exercise, but because the primary calendar has been moved forward, we also have to come out now in order to stay ahead of Iowa and New Hampshire. So:

Rudy Giuliani would be Bill Belichick. Both are truculent, and both have one thing going for them: Belichick has Tom Brady, and Giuliani has 9/11.

Mitt Romney thinks he's Derek Jeter. Of course, he used to think he was Alex Rodriquez.

Fred Thompson is the guy on the football team who doesn't do anything but hold the ball for extra points and field goals. The rest of the game, he can sit back and take it easy.

John Edwards is the Iowa Hawkeyes.

Only sometimes, John Edwards is the Iowa State Cyclones and Mike Huckabee is the Iowa Hawkeyes.

Bill Richardson is Lou Piniella. Richardson even looks a little like a chubby Piniella, and they both are experienced and have held lots of jobs. Of course, just Richardson's luck: Sweet Lou is now the manager of the Chicago Cubs, who haven't won in the last 99 years.

Joe Biden is the best soccer player in the United States — only, of course, nobody's ever heard of him.

Chris Dodd is the best badminton player in the United States — only, of course, nobody's ever heard of him either.

Ron Paul is Manny Ramirez of "Manny-being-Manny fame." When Paul starts talking in the Republican debates, you can just see all the other candidates shaking their heads as if to say: "Oh, it's just Ron being Ron again."

Hillary Clinton is Dean Smith, the great North Carolina basketball coach. Dean had a strategy called the "four corners," which he would often use when he was ahead in the game. The idea was just to sit on the lead. It worked a lot, but when he was still going for his first national championship in the finals of 1977, Coach Smith went into the four corners too early and he lost to Marquette, which kept going for the basket.