Accessibility links
'Enchanted,' a Spellbinding Self-Parody from Disney The film, about an animated princess thrust unprepared into the gritty reality of New York City, is what happens when wised-up meets happily-ever-after. Amy Adams is the indispensable star. 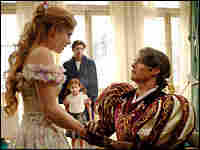 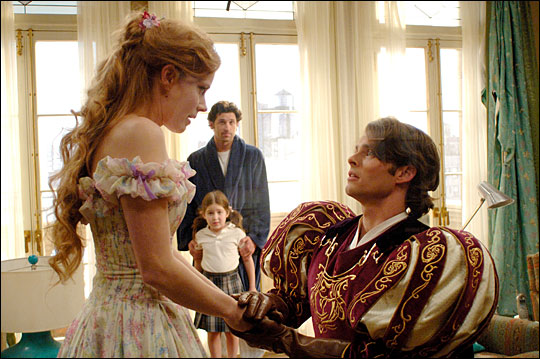 Charming: Amy Adams and James Marsden are archetypes out of water in Enchanted.

'I Seek a Beautiful Girl' 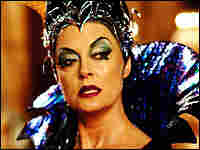 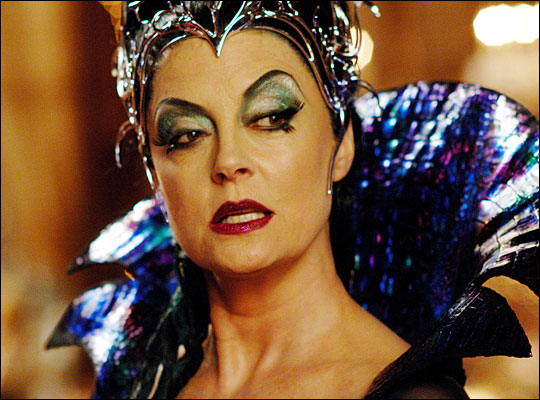 Magically delicious: Susan Sarandon goes merrily over the top — shiny red apple and all — as the wicked Queen Narissa.

Every holiday season, Hollywood studios serve up heaps of child-friendly fare, hoping to cash in on an audience that's skewing younger because of school breaks. This week, though, Walt Disney Pictures is serving up something a little different — and Enchanted is as good as its name.

The film, about an animated princess thrust unprepared into the gritty reality of New York City, is what happens when wised-up meets happily-ever-after. And perhaps because even mild self-mockery has never been the Disney way, Enchanted spent a decade locked away in development hell.

But that delay meant that Amy Adams was available to play Giselle, a princess in the animated kingdom of Andalasia who gets the rudest of awakenings when she finds herself pushed out of a Times Square manhole cover and into Manhattan street life.

Giselle is the ultimate Disney princess — the direct descendent of Snow White, Sleeping Beauty and Cinderella — and Adams is splendid. The actress never overdoes the earnestness or even hints at condescending to the role, and it's impossible to think of Enchanted without her.

Naturally, this creature of total goodness runs into an unemotional divorce lawyer (played by Patrick Dempsey of Grey's Anatomy), who doesn't know what to make of her.

"It's like you escaped from a Hallmark card or something," he says.

To which she replies, confused: "Is that a bad thing?"

Giselle, however, isn't the only Andalasian in town. While she spends her time breaking into song, her earnest boyfriend Prince Edward (James Marsden) arrives in search of her. "I seek a beautiful girl," he says, holding a utility worker named Artie at swordpoint. "My other half, my one coquette — the answer to my love's duet."

Despite these mildly mocking situations, everything resolves in typical Disney fashion, which is what we all wanted in the first place.

Disney animation has always had the ability to create alternate universes that ban nasty reality from the premises. So it's great fun to see the tables turned, even if only for a little while.