Accessibility links
Art Pepper's 'Straight Life' Goes Straight to YouTube Art Pepper was a self-taught jazz legend. He played with Miles Davis and was hailed as one of the greatest alto players to follow in the footsteps of Charlie Parker. He also spent ten years in prison on narcotics charges. Now his widow is turning his life story into a series of short films she's posting on YouTube. 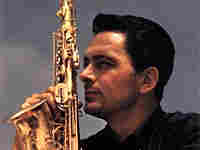 Art Pepper was a self-taught jazz saxophonist who never practiced. But he earned acclaim as one of the greatest alto players to follow in the footsteps of Charlie Parker, and one of the foremost exponents of West Coast jazz. His career was interrupted by 10 years in prison on narcotics charges, and he died in 1982 at the age of 56. Now his widow, Laurie Pepper, is trying to tell his story on film, doing it one chapter at a time and posting it on YouTube.

Laurie Pepper says that after Art died, Hollywood producers approached her about making a movie based on his life, but they didn't really want her input. So she decided to make it herself.

Four years ago, she took classes in video editing and special effects. At 63, she began assembling her film at her home computer – with no budget, volunteer actors and donated technical help.

Laurie says she expects to be done in about a year with the first of three hourlong films — one for each period of Art Pepper's life, between his jail terms. She's not looking for funders, but she wants people to see the film, so she's posting clips from the work in progress on YouTube.

On the screen, Art Pepper's story is illustrated with documents, text, drawings and photos — some of them animated, all assembled on Laurie's desktop.

The images are layered, kaleidoscopic — almost hallucinatory. Laurie says that the animation and drawings are an attempt to re-create the way her late husband saw the world.

"The stories — the things that he tells — really did happen," she says. "But the way he saw them is the way that, you know, a baby or a schizophrenic sees things."

Art Pepper told his story himself in his harrowing 1979 autobiography, Straight Life, compiled from the same interviews that make up the backbone of Laurie Pepper's film.

The saxophonist was never diagnosed with mental illness, but his view of the world was shaped by his circumstances. He was the product of a broken family, raised by his grandmother. He was playing in Los Angeles clubs by the time he was 13. Not long after, he started shooting heroin.

Heroin put Pepper in and out of jail. He disappeared from the music scene between 1960 and '75. In 1969, he met Laurie Miller at Synanon, a Southern California Rehab facility. They moved in together in 1972 and married. Laurie began to manage Art's career, and he made a remarkable comeback — despite a return to his drug habit — releasing three dozen records in six years.

Fred Kaplan, who writes a jazz blog for Stereophile magazine, says YouTube is the right place for Laurie Pepper's film, and he says the music tells the story as much as the pictures.

"It's always dangerous to equate art with autobiography," Kaplan says. "But in Art Pepper's case, I mean, the two are at one, because ... he's pouring out the miseries of his life into the ballad. And by using these songs as the background material, she enriches that."

Kaplan thinks that the point of Laurie Pepper's documentary is the way Art Pepper turned his misery into music.

"And that's how Art saved himself for so many years as he did, which was by utilizing this pain and experience and making it into something that can be shared, and that was rich and meaningful."

Laurie says Art Pepper saved himself and saved her, too. She says she hopes her film does what Art Pepper said he wanted his music to do: make somebody feel something.