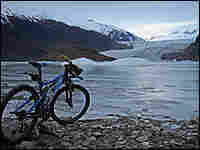 Jill Homer rides with a camera in her pocket. Jill Homer hide caption

Jill Homer of Juneau, Alaska, spent the past week dodging critters in the frozen wilderness. She's training for the cycling division of February's human-powered Iditarod, 350 miles of pedaling along the same course used by heroic sled dogs.

In the coming weeks, Homer needs to condition her body and mind to handle the elements — loneliness, darkness, cold, snow. She has to learn exactly which pieces of gear to take for the expected five-day venture. Well before she has to pitch a tent on the trail, she needs to have practiced establishing camp she's tired, sweaty and cold.

As she reports in this installment of her training diary, her biggest obstacles are turning out to be a lack of snow and an abundance of porcupines. 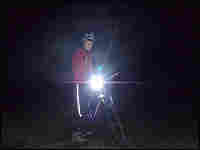 Like in much of the country, winter has been slow to take hold here in Juneau. Skiers already are gazing up at the brown slopes with that look of dread in their eyes. The cyclists, on the other hand, are thrilled.

I caught up to one of them, Ron, as I was returning Sunday from a glacier trail ride. First, Ron praised me for catching him with my full-suspension "squishy" mountain bike. Then he proceeded to crush the good will of that compliment by raving about how great it was to ride clear roads into late November, not like last year, when it just snowed and snowed and snowed and ...

I lost track of Ron's words in the fog of a wistful daydream. Snow. Soft and crunchy, white and wonderful, and as far as I'm concerned, completely essential to my survival. I'll line up with the cyclists all summer long, but when the winter approaches, I have no choice but to break ranks and join forces with the skiers. In order to train for a race that requires riding 350 miles of snow-covered trail, I need snow training. Otherwise, all the cycling I do is like practicing basketball without a hoop. I can run up and down the court all I want, but until I sink some shots, I'm not going to improve my game.

Still, there is more than just fitness virtue in splashing through half-frozen beaver ponds and crackling across frost-coated pavement. I'm beginning to adjust to colder temperatures. Even if it is not "Iditarod" cold here, trying to breathe the scratchy 33-degree air for many hours at a time takes some practice. I should be glad to have this chance to start slow.

I have been steadily increasing the time I spend on the bike each week, and am up to about 170 weekly miles now. Combining this with twice-weekly weight-lifting and a small amount of running helps me round out my fitness, but it definitely consumes a lot of time. As my boyfriend, Geoff, amps up his running miles to prepare for his division of the Iditarod Invitational, the house is beginning to show its first signs of neglect ... ring around the bathtub, dishes in the sink, cats craning for attention. By January, we probably won't even bother to turn on lights anymore before we collapse into bed; newspapers will stack up on the doorstep and our cars will collect snow in the driveway. Our neighbors will think we're on an extended vacation, and in a way, we are. I love training in the winter.