Accessibility links
Verdi's 'Aida' Verdi's blockbuster Aida evokes the mystery and splendor of ancient Egypt, with a healthy dose of passion thrown into the mix. The production comes from Houston Grand Opera and stars soprano Zvetelina Vassileva in the title role, with tenor Marco Berti as Radames.

The exotic aura of ancient Egypt has been the magic ingredient in all kinds of entertainments — from "high culture" offerings such as Norman Mailer's evocative novel Ancient Evenings and any number of learned documentaries, to giddy pop songs. Remember "Walk Like an Egyptian," by The Bangles? 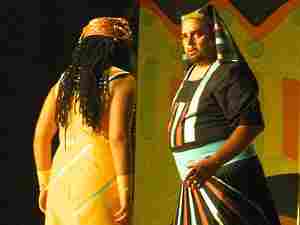 Egypt has also starred in any number of movies and those also cover a wide spectrum, ranging from several versions of Cleopatra's story, to the adventures of Indiana Jones, to "The Ten Commandments." And then there are all those mummy movies, from the original, 1932 classic starring Boris Karloff, to spinoffs such as "The Mummy's Hand," "The Mummy's Returns," and even "I Was a Teenage Mummy!"

And, the exotic spectacle and colorful stories of Egypt are also tailor-made for opera, especially if you add a dose of pure passion to the mix. Handel wrote three operas set in Egypt, including Julius Caesar. Massenet chipped in with Thais, set in Alexandria. But when it comes to Egypt in the opera house there's one piece that tops them all, and it's one of the most popular and spectacular operas of all time: Verdi's Aida.

On this edition of World of Opera, host Lisa Simeone brings us a new production of Verdi's blockbuster from Houston Grand Opera, with a cast including Zvetelina Vassileva in the title role, Marco Berti as her lover Radames and Dolora Zajick as Aida's bitter rival, Amneris.

The Story of 'Aida' 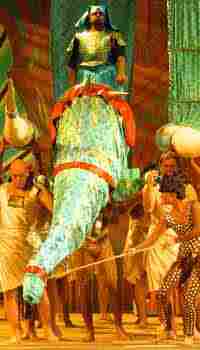 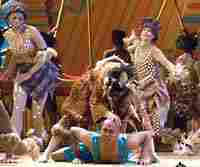 ACT ONE: Aida is an Ethiopian slave, held by Princess Amneris in ancient Egypt. It also happens that Aida is a princess herself. She's the daughter of Amonasro, the King of Ethiopia. As the action begins, Ramfis, an Egyptian High Priest confers with Radames, an army officer. The Ethiopian army is about to invade and Radames hopes to become commander of the Egyptian forces. That powerful job would also bring some personal fringe benefits. Radames is in love with Aida, and if he takes command he'll be able to free her from slavery.

But there's one problem with that plan. Amneris is also in love with Radames. She suspects his feelings for Aida, and she's not happy about it. Radames does get the the supreme command he was hoping for, but Aida knows that may cause as many problems as it solves. She's deeply in love with Radames but she's also faithful to her country and to her father, Amonasro. She expresses that conflict in a brilliant scene that reveals Verdi's uncanny genius for expressing the most intimate emotions, even in an opera that's famous for its pomp and spectacle.

The second scene of Act One, at the Temple of Vulcan, is an example of that spectacle. Ramfis blesses the sword of Radames and then leads a huge ceremony, with the assembled crowd urging Radames on to victory.

ACT TWO: Months later, the Egyptians have turned back the Ethiopian attack. As Amneris waits for Radames to return from battle a chorus of slaves sings about the Egyptian victory. Amneris confronts Aida, still not certain about Aida's true feelings for Radames. As a ploy, she lies, telling Aida that Radames has been killed. Aida's pained reaction reveals that she and Radames are in love. Amneris then admits that Radames is alive, but warns Aida that they are both rivals for his love, and she has no intention of losing Radames to her own slave.

The spectacular second scene depicts the return of Radames and his army. If a production of Aida involves elephants, here is their moment in the spotlight. As Ethiopian prisoners are displayed to the crowd, Aida recognizes her father, Amonasro, among them. But the Egyptians do not realize that Amonasro is actually the Ethiopian King, and he quietly urges Aida not to betray his identity. Speaking for his fellow prisonsers, Amonasro claims the King of Ethiopia was killed and begs mercy from the Egyptians. Radames urges the Egyptian king to release the prisoners, which he does--all but Amonasro. Then the King rewards Radames with with the hand of Amneris in marriage.

ACT THREE: Aida has made plans to meet with Radames, shortly before his wedding to Amneris. But before Radames arrives, Aida's father urges her to trick her lover and get him to reveal the Egyptian plan for invading Ethiopia. At first, Aida refuses to betray Radames. But when Amonasro scolds her for disloyalty, she gives in. Radames appears and Amonasro hides to eavesdrop on their conversation. Aida wants Radames to take her with him to Ethiopia. She knows they can never be together in Egypt. When he agrees, she also gets him to tell her what route his army will use in their attack. Hearing this, Amonasro steps forward to identify himself. Radames realizes his enemy has heard everything. But Amneris has also been eavesdropping. She steps out of hiding and accuses Radames of treason. As the act ends Radames turns himself over to soldiers from his own army.

ACT FOUR: Radames is awaiting judgement for his crime. Amneris is still in love with him and urges Radames to defend himself, but he refuses. When Radames learns that Aida is still alive, he decides that his own death is a way to save her. This throws Amneris into a jealous tirade. Still, when the Priests condemn Radames to death, Amneris begs for mercy, then curses them as he's lead away. As his punishment, Radames is to be sealed alive in an underground tomb, beneath a temple, where he'll slowly suffocate and die.

The final scene takes place in that tomb, though we can also see the temple above it. Radames is waiting for his own death when Aida steps from the shadows. She hid herself in the tomb before it was sealed, so they can die together. As they sing their mournful goodbyes, Amneris is above in the temple, praying for peace.