Accessibility links
Retune The Body With A Partial Fast A water-only diet for a 24-hour period gives your pancreas and digestive system a rest and can cut down on sugar cravings, researchers say. But fast for any longer than that and the body starts to break down muscle and release toxins.

Listen
Retune The Body With A Partial Fast 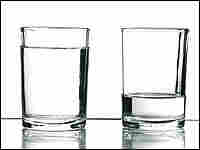 Consuming only water for a 24-hour period — no more than once a week — can suppress insulin secretion and reduce the desire for sugar. iStockPhoto.com hide caption

For thousands of years, beginning with philosophers like Hippocrates, Socrates and Plato, fasting was recommended for health reasons. The Bible writes that Moses and Jesus fasted for 40 days for spiritual renewal.

To understand how the body reacts to a lack of food, you could start by looking at what happens to newborns. Newborns can't sleep through the night because they need to eat every few hours. They don't produce enough glycogen, the body's form of stored sugar, to make energy.

Neufeld says most adults need about 2,000 calories a day. Those calories make energy, or glycogen. Neufeld says it doesn't hurt — it might even help the body — to fast or stop eating for short periods of time, say 24 hours once a week, as long as you drink water.

"You re-tune the body, suppress insulin secretion, reduce the taste for sugar, so sugar becomes something you're less fond of taking," Neufeld says.

Eventually the body burns up stored sugars, or glycogen, so less insulin is needed to help the body digest food. That gives the pancreas a rest. On juice diets recommended by some spas, you may lose weight, but your digestive system doesn't get that rest.

Mark Mattson, a scientist with the National Institute on Aging, says that when we convert food into energy, our bodies create a lot of byproducts we could do without, including free radicals.

"These free radicals will attack proteins, DNA, the nucleus of cells, the membranes of cells," Mattson says. "They can damage all those different molecules in cells."

And even if you don't fast, Mattson says that simply limiting the calories you consume may be beneficial. He points to studies where rats and mice were fed every other day. Compared with those fed normal daily diets, there was a reduction in disease among the rats that were severely restricted in their food intake. Mattson says those findings hold promise that humans could also benefit from partial fasting.

Mattson thinks partial fasting has numerous benefits, from improving glucose regulation, which can protect against diabetes, to also lowering blood pressure. Some animal studies have also shown that partial fasting has very beneficial effects on the brain, protecting against Alzheimer's, Parkinson's and stroke.

Partial fasting may even extend lifespan because eating less sends a message to the cells of the body that they should conserve and use energy more efficiently.

"When they're exposed to a mild stress, [the body's cells] sort of expect that maybe this is going to happen again," Mattson says. "So maybe next time I may have to go longer without food, so I'd better be able to deal with that when it comes on."

Mattson says that process is similar to the way muscles get built up when they're stressed by exercise. Mattson adds that because complete fasting is difficult to study and there is little actual research comparing people who fast with those who don't, it's not clear whether complete fasting (water only) is also beneficial.

Proponents say small, short-term studies find that complete fasting lowers blood pressure and reduces cancer risk. But Dr. Naomi Neufeld worries that complete fasting could be harmful. After the first few days of liquid only, the body uses up all its stored glucose to make energy. And then it turns to other sources, including fat and muscle.

"The main tissue that's the target in long-term fasting is muscle, because muscle has readily available amino acids which can be converted to glucose right away," Neufeld says. "In that way, your brain is never deprived of needed glucose."

The problem, Neufeld says, is that when muscle breaks down, potentially toxic proteins are released. These proteins are partly composed of nitrogen, and too much nitrogen in the body can be toxic to the kidneys and liver. That's when starvation is officially under way.