Accessibility links
Slimming Down Made Huckabee Lean and Mean In his final term as Arkansas governor, GOP presidential candidate Mike Huckabee shed more than 100 pounds. After winning the battle against obesity, he says he's up for anything — including taking on better-funded, higher-polling rivals.

Listen
Slimming Down Made Huckabee Lean and Mean 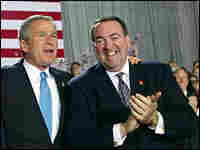 Mike Huckabee stands next to President Bush at a Republican rally in Arkansas in 2002. Huckabee has since lost more than 100 pounds. Tim Sloan/Getty Images hide caption

Read a Profile of Huckabee

Read about Mike Huckabee's political career and his prospects as a presidential candidate.

Here are some things you may not know about Republican presidential candidate Mike Huckabee. On the campaign trail, he often wakes before dawn to take long runs by himself. He always carries protein bars. And no matter how many airports he sees, you'll never catch him eating fast food.

All of this is a must for Huckabee if he doesn't want to return to his former self. Five years ago, Huckabee weighed in at 300 pounds. But in his final term as governor of Arkansas, he made a life-changing decision to diet, shedding more than 100 pounds.

Huckabee grew up in Arkansas, a state proud of many things, including its fried food. And for a long time, the governor indulged as much as anyone.

In early 2003, Huckabee was about to start a cabinet meeting and went to take his seat at the head of the table. More than 50 top state officials witnessed as Huckabee broke the chair.

"I found myself sprawled out on the floor," Huckabee says. "It was terribly humiliating."

The other cabinet members didn't know what to do.

"Some of them wanted to laugh," Huckabee recalls. "But I think they thought, if I do, I'll get fired today.'"

"It was a very embarrassing moment, and one of those kinds of things people who are very overweight experience ... people looking at you when you get on an airline and give you that, 'Gee, I hope you're not sitting by me' look," he says. "It happens all the time."

Huckabee says he knew he had a problem. He had a history of yo-yo dieting — with all the ups and downs in weight that it entails. He had resigned himself to the fact that he was "just destined to be a great big guy."

And that he was: His scale didn't read past 280 pounds, but Huckabee says he easily weighed more. "Probably 300 was a safe bet," he says.

Around the same time he broke the chair, his doctor told him he had type-2 diabetes and that the disease could kill him. It was time for a change.

Huckabee invited Dr. Phillip Kern to the governor's mansion. Kern is a professor of medicine and an endocrinologist at the University of Arkansas, and he runs a program for obese people. Kern admitted recently that he was a little uncomfortable taking on such a high-profile patient.

"The fear, I guess, would be that every news outlet in Arkansas certainly would be hyping the fact that Gov. Huckabee lost weight on the University of Arkansas medical sciences weight-loss program," Kern recalls. "He drops 50 pounds and gains it back just as quickly, and everyone is like, 'Oh, that program stinks.'"

Still, Kern took Huckabee as his patient and laid out his program, which involves special protein shakes that wean you off food. Much of what you do eat consists of vegetables. And you have to exercise.

Kern said Huckabee was an eager student. He told the doctor that the property around the governor's mansion had great areas to walk. Kern encouraged the idea, suggesting that, after a while, the governor "could pick up the pace a little" — maybe even run a race.

"When I started talking 5Ks," Kern says, "he thought I was crazy."

Turns out, Huckabee became obsessed. He drank the shakes. He said no to the fried food. He walked, he started running and training, and in 2005, he completed the Little Rock Marathon in less than five hours.

Everyone straight up to President Bush noticed the smaller governor. At one event in Little Rock, the president addressed Huckabee as "Skinny."

"I got off the airplane," Bush said, "I wasn't sure who I was looking at."

Huckabee says his weight loss redefined him. As a 300-pound man, he says, he would walk into a room and immediately tell a joke about being fat — to get people to laugh with him, not at him. Now, he says, things are different.

"Walking into a room and not having to fend off those, 'Golly gee, this guy is really terribly out of shape. He doesn't look like a person I'd want to vote for,'" he says. "I don't have to overcome that like I did in the past."

Nowadays when Huckabee chats with voters, he is obviously comfortable in his own skin. And Huckabee says he has never had so much energy. Before, climbing the steps at the state capitol would leave him panting as he talked to reporters. Now, Huckabee likes to strap on his bass guitar on the campaign trail and jam with his band, Capitol Offense.

'I'm Ready to Go to the Finish Line'

Whether Huckabee's success in becoming fit can help him succeed in becoming president is a big question. He's not one of the Republican frontrunners.

But Huckabee says his battle with obesity has given him a special ability to connect with people struggling with their own weight or a disease. Those kinds of personal connections can be important in states like Iowa, where voters value face time. And Huckabee has been running a surprising second there.

Huckabee talks often of weight loss and fitness. In fact, he weaves it into all kinds of subjects: health care, national security and why he thinks he still has a chance to be president — despite other candidates who are better-financed and ahead in the polls.

"I say, 'Look, this is a 26.2-mile race, and the fact that someone is ahead of me at mile seven doesn't mean a whole lot," he says. "By mile 14, they may be laying on the ground, grabbing their cramping calf muscle, and I'm blowing past them, because I'm trained for this. I'm ready to go to the finish line."