Accessibility links
In a Booming India, Artists and Their Market Adapt Affluent professionals in India are doing what the affluent always have done: collecting art. But as prices soar, the quality of art — and of conservatorial facilities — isn't necessarily keeping pace.

Listen
In a Booming India, Artists and Their Market Adapt 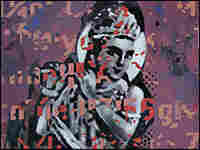 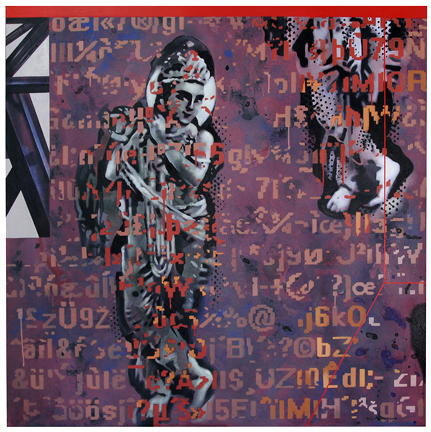 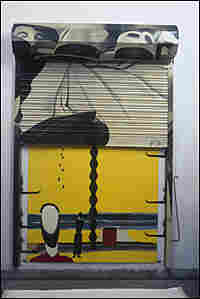 Among the artists the Gallery Chemould represents is Atul Dodiya. Like many contemporary Indian artists, he was profoundly affected by the 1992 Hindu-Muslim riots in his country. For days, nearly everyone in the vibrant city of Mumbai lived behind shutters, even during the day. Dodiya, who was well known for his paintings on canvas, began to paint on shutters. His work "Mirage," shown here in its half-open view, dates from 2002. Atul Dodiya/Courtesy Gallery Chemould hide caption 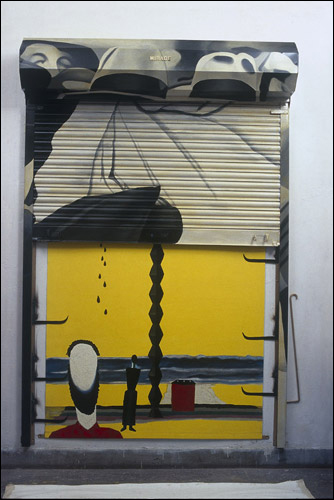 Among the artists the Gallery Chemould represents is Atul Dodiya. Like many contemporary Indian artists, he was profoundly affected by the 1992 Hindu-Muslim riots in his country. For days, nearly everyone in the vibrant city of Mumbai lived behind shutters, even during the day. Dodiya, who was well known for his paintings on canvas, began to paint on shutters. His work "Mirage," shown here in its half-open view, dates from 2002.

In India, the super-rich have more money than in any other Asian nation. And now they're doing what the rich have done for centuries: collecting art. But beauty has its price, and that price is getting higher — although the art, according to collectors and critics alike, isn't necessarily getting better.

Collector Mukeeta Jhaveri has a large apartment by Indian standards, and almost every inch is covered with art. There are paintings on the walls, sculptures on the chairs and tables, ceramics, wood carvings, textiles. Jhaveri points to one piece, describing it as "a historically important work by an artist who was very close to Gandhi in the freedom struggle." Another work, a huge triptych with a bright yellow background, depicts a woman in her home as riots against the Sikhs take place outside her window.

But increasingly, Jhaveri and her husband, an investment banker, are drawn to themes in even more contemporary art.

"The importance of the stock market and market capitalization and technology and media and real-time information — these are things that hallmark the times I live in," Jhaveri says. "And if my artist friends are able to capture that, that rocks my socks."

Clinking wine glasses, light chatter, hors d'oeuvres, whitewashed walls: This could easily be an opening in New York's arty Chelsea district. But the saris and the melodic accents make the scene unmistakably Indian. The Gallery Chemould in Mumbai, India's commercial capital, is one of the country's oldest showcases for contemporary Indian art.

"A lot of the artists I was working with were really becoming big in thought, big in ambition," says gallery director Shireen Gandhy. And their art, she says, was getting bigger, too. So in February, Gallery Chemould moved into a larger space.

"There's no question that India is booming," Gandhy says. "There is money in the market, [the] stock market is going up and naturally then ... there's like a ripple effect. And art became like the victim."

If not the art, then the people who love it. Gandhy says the rising price of art has driven some longtime collectors out of the market. Work that sold in the late 1980s for perhaps $2,500 can now fetch more than $1 million. That's quite a premium in a country where the average wage is around $800 a year.

Some artists have risen with the market. Sudarshan Shetty, 46, has gone from living a lean existence to having two studios.

Much of Shetty's work is large and sculptural. And like the work of many of his contemporaries, his is filled with mixed emotions about modernization. In a recent exhibition, he showed a piece called "Love" — a huge, mechanical dinosaur skeleton with audible moving parts, making love to a sports car. It's a metaphor about the old falling in love with the new, and a comment on how the market can distort human interactions.

Love, the artist points out, begins "with a basic human emotion, and at the other end of the spectrum it's also a marketable phenomenon."

Artists' Stock: On the Uptick?

Painter Baiju Parthan is known for exploring the effects of technology on culture; his painting "Brahma's Homepage" evokes an online portal. Images from Hindu mythology float on the canvas as if in virtual space. In an online version, viewers can click it and discover more imagery. Parthan says he wants to force viewers to pause in a time when everything is moving at lightning speed — and a time when some artists are starting to feel like commodities.

"The art market is beginning to resemble or reflect the stock market," Parthan says. "It's kind of like people betting on you — or like a horse race where this particular one will maybe finish first, so let us put all our money on him or her."

In India today, there are investment funds set up to make money off the the nation's artists. Ranjit Hoskote, a prominent Indian critic, says many artists are producing quickly to make money while the market is hot. But, he says, much of the work isn't very good.

"The downside of this very optimistic story of the boom of the art market in India is that artists don't really have time or repose now to work at their art," Hoskote says. "It's become a bit of an assembly line."

Looking to India's Future, Learning from America's Past

This kind of heated art market may be new to India, but it's certainly not new in the West. In 1980s New York, a number of emerging artists became flash-in-the-pan hits. Their work brought in big bucks for a few years, but eventually ended up in some unfortunate collector's basement.

Alas, in India, those basements aren't likely to be climate-controlled. In a nation where one-quarter of the people live below the poverty line, Hoskote says, the basic infrastructure for displaying, preserving and studying art is way behind the million-dollar price tags.

"In the prehistoric period — that is to say, before this boom — artists couldn't always afford good materials, to put it bluntly," he says. "So we have paper that has become fragile. We have paint that flakes off." Hoskote has seen paintings so badly deteriorated, they've become sheets of fungus.

Gallery patrons are starting to realize the need to preserve and support Indian art. Collectors like Mukeeta Jhaveri would like places to have their collections attended to by professionals and exhibited for the general public. But building such places won't be easy.

"Making philanthropy tax-efficient — that whole culture hasn't come here yet, [though] we've already begun to clamor for it," Jhaveri says. "A lot of wealth doesn't get disseminated in the form of philanthropy, whether it's museums, hospitals, charitable trusts."

In the Mumbai neighborhood of Colaba, hammers bang and power tools hum as new galleries are built above a street littered with trash. Outside the construction sites, beggars hold out their hands to passing tourists. Mort Chatterjee, who runs one of the newest spaces, says he's seeing collectors start to balk at the high prices and think harder about what they are buying.

"We have evolved an art scene which has been primarily driven by money, but which [is] becoming a little more full and interesting in terms of the byproducts that that brings with it," he says.

In a way, Chatterjee says, India is where the U.S. was in the early 20th century, when a flood of new wealth began buying art, building museums, and turning the U.S. into the world's cultural powerhouse.