Accessibility links
Patti Scialfa: On Her Own, Again Play It As It Lays is Patti Scialfa's third solo CD. The New Jersey singer/songwriter, a longtime member of the E-Street Band, is married to Bruce Springsteen.

Listen
Patti Scialfa: On Her Own, Again

Play It As It Lays is Patti Scialfa's third solo CD. The New Jersey singer/songwriter, a longtime member of the E-Street Band, is married to Bruce Springsteen. Scialfa tells Liane Hansen about the album.

Patti Scialfa Plays it as it Lays

Listen to an interview and performance from WFUV 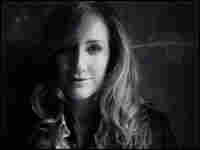 Though her schedule with Bruce Springsteen's E Street Band has delayed her own solo career, when Patti Scialfa does record, it's hard not to take notice. Courtesy of Patti Scialfa hide caption

Hear the music, skip the talk

'Play It As It Lays'

Patti Scialfa was in the midst of a busy week: Monday on The Today Show, Tuesday on Late Night with David Letterman and Wednesday on my show.

With a lot of excitement buzzing through the WFUV halls, the crew and band arrived early that morning in anticipation of a full-blown live performance in Studio-A. Notable players and familiar faces were mingling outside the studio -– Nils Lofgren, Soozie Tyrell, Larry Campbell, Steve Jordan -– all sharing coffee and conversation.

Introducing myself to Scialfa, I felt an instant connection. We traded stories about our past and present, and I began to feel that this might just be a really good session. Talking to her about the new album wasn't going to be difficult — I liked the music, and the questions would come easily. The challenge would be asking about her husband, Bruce Springsteen, without taking the focus away from her. Listening back, I think it worked out fine.

Scialfa began her career by singing backup for the likes of David Johansen, The Rolling Stones, and Southside Johnny & The Asbury Jukes. She had been signed to Columbia Records based on her demos, but the success of Bruce Springsteen's Born in the U.S.A. took The E Street Band on an extended tour. This complicated her solo career, as did her eventual marriage to Springsteen. She's since recorded three albums: Rumble Doll, 23rd Street Lullaby and Play It As It Lays, released earlier this year.

New York City's WFUV features a wide mix of new and established artists. Its live stream, archives and podcasts can be heard at wfuv.org.