Accessibility links
Measha Brueggergosman: Classical Cabaret Measha Brueggergosman is a young soprano on the rise. Her major label debut, Surprise, features offbeat cabaret songs by Satie and Schoenberg. She describes the CD as "classical music letting its hair down."

Hear Brueggergosman discuss one of the Emily Dickinson songs.

Aaron Copland's 'Heart, we will forget him' 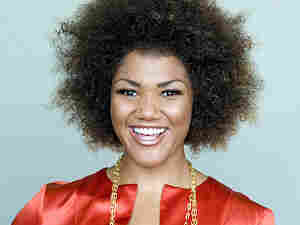 Soprano Measha Brueggergosman says she's "on fire" for classical music. Listen to the intensity she brings to her performances and it's easy to agree. She's just 30, but the British magazine Gramophone has already hailed the Canadian singer as "Jessye Norman's heir."

Brueggergosman delights in the unexpected, though. She loves to sing for fun in karaoke bars and in recital, she often performs barefoot. Her surname is a droll mashup of her own family name, "Gosman," and her husband's family name, "Bruegger."

Her new CD is called Surprise. It's on the on the powerhouse Deutsche Grammophon label. But there are no opera arias, and no lieder by Schubert. Instead, Brueggergosman has recorded a collection of offbeat cabaret songs.

"Cabaret, to me, is classical music letting its hair down," she says.

The CD includes music by French composer Erik Satie (whom she describes as "a bit of a weirdo, right?"). And there are several quirky and salacious early songs by Arnold Schoenberg — whose uncompromising system of 12-tone composition dominated art music for much of the 20th Century.

"He did love a good joke, and he did love the art of song," Breuggergosman says.

Surprise also features tunes from the American songwriting team of Arnold Weinstein and William Bolcom—who has become a mentor for Brueggergosman. She previously appeared as a soloist on Bolcom's 2005 Grammy winning recording of "Song of Innocence and Experience," which set to music the poems of William Blake. Bolcom, who has won the Pulitzer Prize for music and the National Medal of the Arts, created arrangements for "Surprise," and plays on some of the selections.

Bolcom-and-Weinstein songs on "Surprise" include "George," a tale of an opera-loving transvestite who is murdered by a Navy officer.

"I think that music without drama or character is uninteresting," Brueggergosman says. "That's what I kind of like about this repertoire, is that it feels like it's an extension of who I am, anyway."