Accessibility links
Edwards Didn't 'Cower' from Wife's Cancer This spring, John Edwards announced that his wife's breast cancer had returned in a treatable but incurable form. Still, the Edwardses decided not to let Elizabeth's illness derail John's campaign for the Democratic nomination for president. 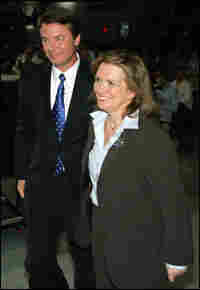 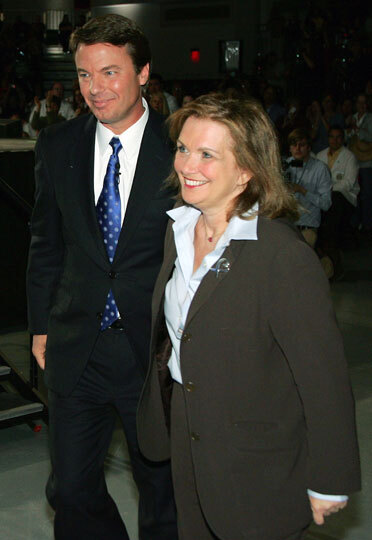 Read about John Edwards' political career and his prospects as a presidential candidate.

There's an adage in politics that the last thing any campaign wants is a surprise. John Edwards got a most unpleasant one this spring.

In March — three months after he officially launched his presidential bid — Edwards announced that his wife's breast cancer had recurred. This time, the disease was in a form that's treatable, but not curable.

Appearing with her husband at a North Carolina news conference, Elizabeth Edwards stressed that she felt no symptoms and planned to continue her normal activities. And the former senator dispelled speculation that he would drop out of the race.

"The campaign goes on strongly," John Edwards said at the news conference, which was at the same hotel that hosted the couple's wedding reception. "We have no intention of cowering in the corner."

Friends of the Edwards family say the couple never seriously considered stopping the campaign. The day before the news conference, John Edwards had canceled his political events to join Elizabeth at the hospital, where tests revealed that her cancer had spread to her bones. The diagnosis was serious; women with similar conditions rarely survive 10 years. But the Edwardses had feared the news might be even worse.

"There were moments that day that they were apprehensive about what the doctor was going to tell them," said Hargrave McElroy, Elizabeth Edwards' longtime friend and personal assistant. "They had gone to the worst case in their own minds."

But when doctors told the Edwardses that there was no medical reason for them to stop traveling or campaigning, the couple didn't hesitate in deciding to continue their White House bid. "They were sort of relieved," McElroy said.

Still, McElroy said the Edwardses were taken aback when their decision proved controversial. Katie Couric asked the couple if they were in denial; a New York Times story questioned whether the senator was being driven by courage or "callous disregard." But McElroy said there are few things Elizabeth would rather do than campaign.

"Both of them like getting out there, traveling the country, meeting people," McElroy said. "In terms of her physical health, I think she enjoys it."

Mrs. Edwards has maintained an active campaign schedule since her diagnosis, appearing both alone and with her husband. And despite the initial controversy, a Gallup poll in late March showed most Americans supported the Edwardses' decision to keep running.

"I think that what they're doing is terrific," said Rosa Bromberg, a cancer survivor who saw Elizabeth Edwards speak in Francestown, N.H., this month.

'Not Going to Quietly Go Away'

In some ways, the Edwardses are setting a new political precedent. Only a few times in recent history has a White House candidate's spouse been diagnosed with a terminal disease; in those earlier cases, the candidates handled things differently. In 1972, Sen. Birch Bayh dropped out of the race for the Democratic nomination when his wife was stricken with cancer. In 1968, Gov. George Wallace reacted to his wife's worsening health by trying to hide it.

But Elizabeth Edwards says times have changed since then: Candidates live more public lives, cancer doesn't have the stigma it once did, and she believes talking about her illness helps voters learn something about her husband.

"I think in a country that needs a lot of healing, that part of his personality is going to be incredibly important," she said.

Mrs. Edwards noted that during her recent New Hampshire campaign swing, nobody asked about her health — an encouraging trend, she said, because it affirms she doesn't look sick. She said it also allowed her to talk about other issues that are important to her, such as education and the environment.

Still, her battle with cancer likely will remain in the limelight, in no small part because it's become ingrained into the message of her husband's campaign. In one of his current TV commercials, the former senator talks about the day Elizabeth received her diagnosis.

"Elizabeth and I decided in the quiet of a hospital room – after 12 hours of tests and after getting very bad news — what we were going to spend our lives doing," Edwards says in the ad. "We're not going to quietly go away."