Accessibility links
Eggnog: A Potent Family Tradition Almost every Thanksgiving for 50 years, Kevin Weeks' father has made eggnog and aged it until Christmas — making it almost impossible to detect the alcohol. Weeks shares his family's recipe. 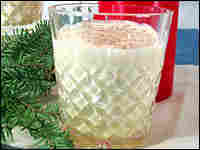 At Thanksgiving, the thoughts of food writer Kevin Weeks and his father, Bob, turn to Christmas — and an annual batch of eggnog. Kevin Weeks for NPR hide caption 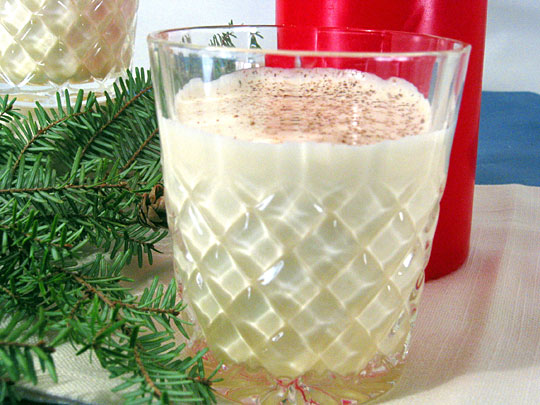 At Thanksgiving, the thoughts of food writer Kevin Weeks and his father, Bob, turn to Christmas — and an annual batch of eggnog.

Get a recipe for the eggnog made by Bob Weeks. Also, recipes for alcohol-free eggnog and eggnog cheesecake. 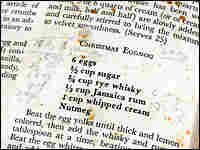 Bob Weeks' eggnog recipe came from a beat-up version of The Wise Encyclopedia of Cookery. His son Kevin bought him a new copy of the book — and kept the old, annotated version for his own collection. Kevin Weeks for NPR hide caption 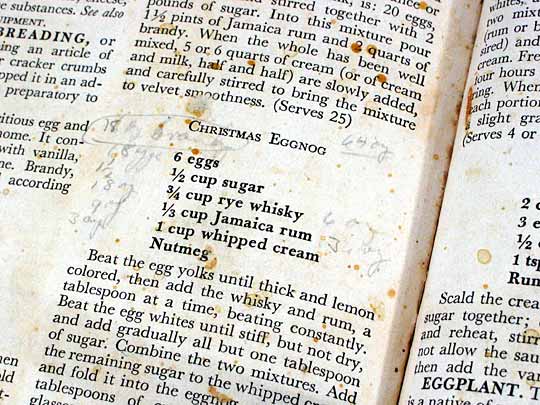 Bob Weeks' eggnog recipe came from a beat-up version of The Wise Encyclopedia of Cookery. His son Kevin bought him a new copy of the book — and kept the old, annotated version for his own collection.

Read my father's recipe, or any other traditional recipe for nog, and you'll find it includes raw eggs. In the case of my father's version, not only are the eggs raw to begin with, but they're then allowed to sit, unrefrigerated, for a month. Sounds like a recipe for something far worse than salmonella. But it's not.

The FDA advises against ever eating raw eggs, but then the FDA asserts that everything on Earth should be heated to at least 160 degrees before eating — which would give plain old scrambled eggs the texture of shoe leather. In liquids, alcohol concentrations as low as 8 percent are enough to kill most bacteria. In the case of Dad's recipe, I calculated the alcohol content at 21 percent of the total — nearly 1/4 pure alcohol. And that's not counting the sugar, which is also a preservative.

I'm not advising you to ignore the FDA, and if you are concerned about pathogens, you can make the base just before using it and use pasteurized eggs (you may not have noticed, but you can probably find pasteurized eggs at your local supermarket). Pasteurized eggs, like pasteurized milk, have been heated to a temperature sufficient to kill any pathogens. But personally, I plan to have several nogs of my father's Christmas cheer this December, made exactly the way he has always made it.

One caveat: If you see the mixture bubbling or any sort of film or mold appears on it, then something has gone wrong. Discard it. I've never seen this happen, but I suppose a super eggnog-resistant organism is possible.

One of my earliest memories is of standing atop a stool beside my father in the kitchen on the day after Thanksgiving as he made eggnog. I must have been 6 or 7 at the time, because I remember the silvery bowl was almost as big as I was.

I recall that he added whiskey to the bowl in a slow stream, as carefully as a chef making mayonnaise, the electric mixer going full speed, beating, whining and rattling against the sides of the bowl. He was, and is, a gentle man, but he was also big and expansive, and that was the most delicate and patient operation I have ever seen him perform.

The whiskey entered the maelstrom almost drop by drop. He'd learned from past years that working too quickly, too brashly, produced scrambled eggs instead of the smooth and unctuous base he'd need a month from that day when he added the cream and served the nog to guests. And there were the inevitable splatters that over the years had accumulated on the open pages of the cookbook containing the recipe.

Almost every Thanksgiving for 50 years, my father has made eggnog, which he then ages until Christmas — a once-common practice that mellows the mixture to the point where the alcohol is almost impossible to detect.

This liquid thread linking Thanksgiving and Christmas is a family tradition, a footnote in the long history of eggnog.

The origin of eggnog, as with any recipe more than 100 years old, is more theory than fact. However, early recipes were often made with ale, which was often served in a "noggin" (a small cup) and likely was the source of the "nog" or "nogg" portion of the name. The "egg" part is self-evident. We also know that, made with brandy or wine, it was an expensive drink popular with the English aristocracy.

Jerry Thomas' Bartenders Guide or How to Mix Drinks (first published in 1862) included this recipe:

Fill the glass with rich milk and shake up the ingredients until they are thoroughly mixed. Pour the mixture into a goblet — excluding the ice — and grate a little nutmeg on top. This may be made by using a wine glass of either of the above liquors, instead of both combined.

Every well-ordered bar should have a tin egg-nogg "shaker," which is a great aid in mixing this beverage.

Another version in the same book calls for 20 eggs and 2 1/2 quarts of "fine old brandy."

Eggnog likely came to the United States from England with aristocratic immigrants. Isaac Weld, an 18th-century Irishman who wrote about his travels in America, noted: "The American travelers, before they pursued their journey, took a draught each, according to custom, of egg-nog, a mixture composed of new milk, eggs, rum and sugar, beat up together." Brandy was indeed a precious commodity in the New World, so rum became the most common alcohol in the North, while bourbon became typical in the South.

My father's original recipe came from his favorite cookbook, The Wise Encyclopedia of Cookery that was published in 1951. The book was reprinted about 30 years ago, and I bought a copy as a Christmas gift for my father. In return, I asked for his old, battered, green, cloth-bound edition for my library. I did want the old book as a connection with my father; but more, I wanted the pencil notations on the eggnog recipe that detailed his changes to the ingredients.

Since Thanksgiving was a week early this year, there is still time to make a batch, stick it in the back of a closet and — come Christmas — pull it out and add the cream.

For the many Christmases that I've since spent away from my parents, I've often turned to my father's old volume, now bound in duct tape, to make a batch of nog myself. As I hoped back when I swapped a new book for his old one, I feel his presence beside me when I make it, and again when I raise a noggin to him. 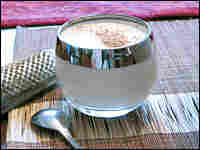 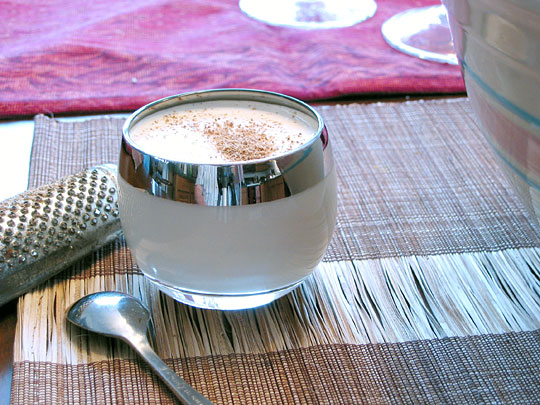 My father is 83 and still makes eggnog almost every Thanksgiving. As befits a Southerner, he substitutes bourbon for the rye whiskey in the original recipe, with a bit of rum to round out the flavors. His other great contribution to the original recipe is the aging. He mixes the eggs, sugar and whiskey together, pours it in a jar, and loosely covers the top before setting it in the back of a closet to age and mellow for a month — and does it ever mellow.

During the aging process, a number of chemical processes occur, producing new flavor compounds (as does the exposure to air). By the time he adds the cream, you can hardly taste the alcohol in the mixture.

My father says he often increases the bourbon to 1 cup and the rum to 1/2 cup in the base mixture, producing a more potent (and less thick) end result. He warns that if you do this, the time spent adding the booze to the eggs will be proportionately longer.

With an electric mixer, beat eggs until well mixed.

Combine bourbon and rum, and add very gradually to the egg mixture; this should take about 15 minutes. If the booze is added too quickly, it will curdle the eggs by causing the proteins to denature, so take it slow.

Beat in the sugar — about 5 minutes — and store in a glass or ceramic jar or jug in a cool, dark place, but not a refrigerator. Of course you can drink the same day, but our family recipe calls for a month of mellowing. The container should be covered loosely, but you want some air to get in.

Whip the cream until almost stiff. Whip in vanilla and sugar.

Stir the base mixture and thoroughly mix into cream.

This nog will be very thick and you may wish to thin it somewhat with milk.

Serve in punch cups with a sprinkling of finely grated nutmeg.

There are lots of alcohol-free recipes around calling for things such as vanilla ice cream or vanilla pudding (one of the main flavor components of bourbon is a vanilla-like compound, so the presence of vanilla here echoes the Southern classic). Although this can't compare with the rich, smooth, deep and seriously alcoholic version my father makes, it is still a relatively pure version of the original drink, and is far better than the insipidly sweet and almost gooey stuff sold in grocery stores.

Note: I recommend pasteurized eggs here because this recipe doesn't include alcohol.

2 cups Half and Half

Allow whites to warm up to room temperature, then beat until fluffy but not stiff. Beat in 1/2 cup of sugar.

In another bowl, beat yolks until creamy and add remaining sugar. Stir in Half and Half, vanilla extract and nutmeg or cloves. Fold whites into yolk mixture. Beat whipping cream until almost stiff and fold into mixture.

Serve in punch cups with a sprinkling of finely grated nutmeg. 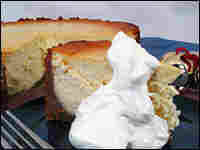 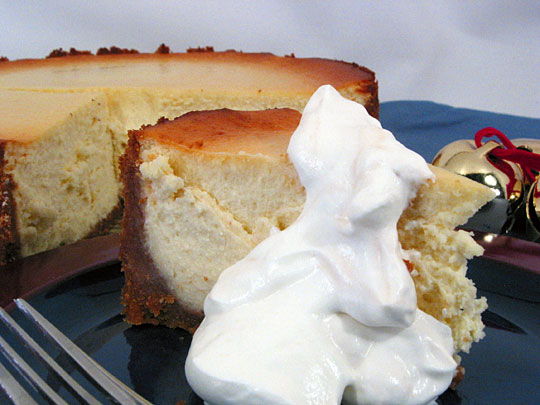 While my father made eggnog on the weekend following Thanksgiving, my mother made her mother's recipe for seriously good bourbon cake. On Christmas Eve, we children were permitted a thin slice of cake for dessert. And on Christmas day, we got a small taste of eggnog in the late afternoon when Dad made it up for our traditional Christmas open house. But both treats are at their best if made a month in advance, requiring foresight and planning. For a lightly alcoholic and equally rich dessert, this cheesecake offers an echo of those holidays.

In a small bowl, mix together graham crumbs and 3 tablespoons of sugar. Stir in butter. Press into the bottom only of 9-inch springform pan and bake for 13 minutes. Cool.

Using an electric mixer on medium, beat together the cream cheese, flour, 1 1/3 cups sugar and bourbon until well blended. Add whole eggs and yolks, 1 at a time, mixing on low until blended. Mix in ricotta, rum and nutmeg.

Brush sides of springform pan with melted butter. Pour batter into pan, place on a baking sheet and bake on lower middle rack for 10 minutes. Do not open door. Reduce temperature to 200 and continue cooking until an instant-read thermometer registers 150 degrees in the center — about 1 1/2 hours longer.

Set on wire rack and cool to room temperature. Cover and refrigerate for 4 hours or overnight. Run a knife around rim of pan to loosen cake before removing rim.

Chill bowl and beaters in the freezer for 15 minutes. Pour whipping cream into bowl and whip until soft peaks form. Add sugar while beating. Add bourbon while beating.