Accessibility links
Online Courses Catch On in U.S. Colleges Nearly one in five college students takes at least one class online, according to a new survey. For professors, the growth of e-learning has meant a big shift in the way they deal with students and prepare for class, as well as the kinds of students they teach. 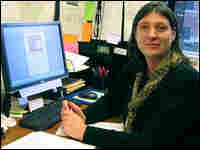 Denise Keele, professor of environmental policy at the University of Illinois-Springfield, says she loves online teaching, but she feels it takes much longer to prepare for her online classes than her off-line courses. Larry Abramson, NPR hide caption 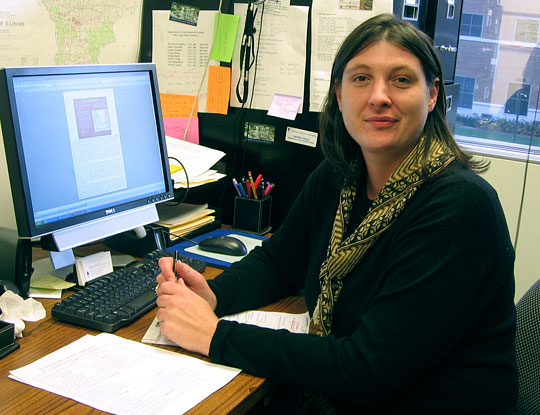 Denise Keele, professor of environmental policy at the University of Illinois-Springfield, says she loves online teaching, but she feels it takes much longer to prepare for her online classes than her off-line courses. 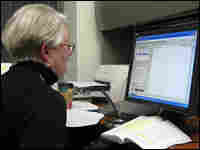 Sara Cordell, professor of English at the University of Illinois-Springfield, says she feels online students become better writers because they get so much practice. Larry Abramson, NPR hide caption 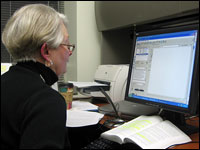 Sara Cordell, professor of English at the University of Illinois-Springfield, says she feels online students become better writers because they get so much practice.

When today's college graduates get together for a reunion someday, they may decide to do it by computer. That's because right now, nearly one in five college students takes at least one class online, according to a new survey.

For professors, the growth of e-learning has meant a big shift in the way they deal with students.

Take professor Sara Cordell of the University of Illinois-Springfield: Her day doesn't end at 6 p.m., as it does for some college professors.

Cordell sits at her computer in her campus office to chat with a half-dozen students gathered in front of their screens: One is in Tennessee, another in California's central valley, another in Ohio. They're all here to talk about Thomas Hardy's 19th-century novel Tess of the D'Urbervilles.

Cordell has a microphone hooked up to her PC, and her students listen from home. All but one of them type their responses, which appear in chat-format on Cordell's screen.

The process looks kind of awkward — the natural flow of a regular class is missing, as responses arrive onscreen in a digital flood. But at second glance, there's something else here not seen in a regular college class: All of the students are paying attention and all are engaged.

Student Max Parish, 22, has his microphone hooked up, and chimes in. Parish works sometimes as an electrician in a small town in California's San Joaquin Valley. He says Springfield's English program is the only online bachelor's program he could find. The school has a well-established virtual curriculum.

Parish said he misses the give-and-take of a traditional classroom.

"But an advantage with online stuff is that because people have to type, you have to think more about what you say before you say it. So you usually end up with a lot more intelligent conversation," Parish said.

Cordell, who is in her 50s, has been teaching offline for 25 years; online for four. She said she was initially skeptical about how meaningful an English course could be online. But now she's a convert. Online classes conducted in real time have a special kind of immediacy, Cordell said.

"They're right there. They're listening. And they like talking to each other, typing to each other. That, I think, is a big attraction, because they get to engage real time with the other students as much as with me," Cordell said.

After two hours of discussion, Cordell signs off. But the class actually never goes to sleep. The students, including a mother of six, will keep the conversation going. This is known as the asynchronous part of the class, and it happens on an online education content management system, where written assignments are posted.

That means the work never stops — and many instructors say teaching an online class is more work.

"In my experience, it takes about twice as long — prep time, putting materials together — to actually deliver the online course than it does to deliver the on-campus course," says Denise Keele, a professor of environmental policy.

Keele is intense and enthusiastic, especially when it comes to her regular classroom courses.

In her class on literature and the environment, she tackles how the idea of wilderness changed as Americans became more mobile in the 1960s, and how writers such as Edward Abbey reacted with horror to what he referred to as "industrial tourism."

In her on-ground course — that means that real students come to this windowless classroom for a regular class meeting — part of the show is Denise Keele herself.

"See the USA in your Chevrolet!" Keele sings. "These were the commercials around the late 1960s and 1970s. I can get in my Chevrolet, tour the whole West in two weeks with my family, right?"

Like many undergraduate courses, the class is filled with young students having the classic American experience of going to college for four years.

But when Keele moves to her online course, the population changes.

"This class is all working professionals, with the exception of two. They start posting on Friday at about 4," Keele said.

For this course, Keel prepares and records lectures. There is no official class meeting time. Students can listen at their own pace and follow along with the PowerPoint presentation timed to go with the audio.

If students get bored, they can jump ahead. If they fall behind, they can listen to the lecture on their iPods.

But, Keele said, preparing a formal lecture like this is something she would never do for a regular class.

"I can't do what we just did [in the classroom]. I can't reread the same material I know my students just read, have the 10 points I know I want to get to in an hour. I have to already have spelled that out," Keele said.

Keele said she feels just as close to these distance students as she does to those in her on-campus classes.

Take Jeff, who is taking her course on environmental policy from far away.

"Jeff is actually a park ranger out in Montana. He wouldn't be able to physically be at a university for an 'on-ground' class," she said. "I also know personal things about them, just like I do my 'on-ground' students. He's going back to D.C. for the holidays."

Online student-teacher relationships are getting deeper and warmer, thanks in part to growing sophistication about how to teach effectively online.

Online Education Program at the University of Illinois