Accessibility links
Documentary Spotlights West African 'Sisters In Law' Two women in the West African nation of Cameroon are delivering justice and breaking gender barriers in the courtroom. Their work is the subject of the documentary Sisters-in-Law. Judge Vera Ngassa, one of the women featured in the film, and filmmaker Kim Longinotto discuss the women's unique bond and the idea behind creating the documentary.

Two women in the West African nation of Cameroon are delivering justice and breaking gender barriers in the courtroom. Their work is the subject of the documentary Sisters-in-Law. Judge Vera Ngassa, one of the women featured in the film, and filmmaker Kim Longinotto discuss the women's unique bond and the idea behind creating the documentary. 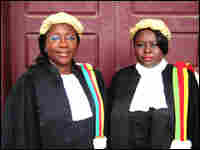 More on Sisters in Law

I'm Michel Martin. This is TELL ME MORE from NPR News.

Coming up: The Money Coach with advice we hope you won't need on avoiding and surviving foreclosure.

Judges Beatrice Ntuba and Vera Ngassa are the subjects of the documentary, "Sisters in Law," which airs tonight on the PBS program "Independent Lens." Judge Ngassa joins me now from her office in Kumba, Cameroon. And filmmaker Kim Longinotto is on the phone from Amsterdam.

Welcome. Thanks for joining us.

MARTIN: And now, Kim, this film - you were filming for three months. It covers sort of seven weeks in the life of this courtroom. How did you find these ladies, and what drew you to this project?

Ms. LONGINOTTO: I went for a research trip with Florence.

MARTIN: And Florence being your co-filmmaker.

Ms. LONGINOTTO: Yes. Yes. That's right. Yes. And we went together to Cameroon, and that's when I met Vera and Beatrice, who were at university with Florence.

MARTIN: Oh, I see. And, Vera, what drew you to this work?

Judge NGASSA: Immediately, the - you know, a sense of justice. I've always had that sense of what is just and what is fair, and I've always had the tendency to want to protect the oppressed and the underdog. So from about the age of 9, I knew I wanted to be a lawyer. But I thought I was going to be a defense attorney. And what - when it clinched, it was when I was about 15 years old and I read the book "To Kill a Mockingbird" by Harper Lee, and, you know, that settled it. I wanted to be another Atticus Finch, because his integrity and his compassion really touched me.

So I went to school and I had a degree in law. And I wanted to go on to do a Ph.D. and teach law and practice to be defense attorney, but my father -because in Africa, our fathers have a lot of say in our lives - my father persuade for me to go into the school of magistracy. I didn't want to at first, but looking back now with hindsight, I have discovered that he did me a lot of good, because when you're working in a system that is not very, very just and transparent, sometimes you could be a good lawyer and you would not win a case. But as a prosecutor and a judge for these 20 years, I have really been able to do what I wanted to do to help people.

MARTIN: You know, you mentioned your father having such a heavy role in the direction that your career took. That leads me to - this is a good place to bring in a clip from the film. Here's a clip of interaction that you had with a man accused of kidnapping his child. Let's play that.

(Soundbite of film, "Sisters in Law")

Judge NGASSA: Listen. I don't want long stories of the (unintelligible) in 1914.

Judge NGASSA: Just tell me, did you go (unintelligible)?

Unidentified Man: So I went from the streets to the family. I took this $50 advance. They gave me (unintelligible).

MARTIN: You know, people in this country will recognize shades of Judge Judy and some of out other judges and adjudicants in your tone, and it's fun to watch actually. But it's - there is a very sad story behind it. This girl did not want to marry this man, and she was forced to, from her account, and then went home to her father's house for a visit, and the father of the child came and took him against her wishes, and she's obviously very, very upset.

So - but there is - I wanted to ask you, then, given that here's a situation where apparently, men can still do this, can force their daughters to marry someone against their wishes, and is it unusual for you, as a woman, to have this level of authority?

MARTIN: Now, Kim, obviously, you were drawn to the story for some reason. Was part of what attracted you to the idea of these women wielding such authority in a country which is, I think, still considered to be traditional in many respects, where women are not seen to have the level of authority that perhaps one might like? Is that part of it?

Ms. LONGINOTTO: It was part of it. But, I think, I would have wanted to make a film about Vera wherever she was, and I think what really - what I loved about her was the way that she was so even-handed. I mean, there's a woman who hasn't been to school, was married against her will, and Vera listens to her and weighs up what she has to say with equal weight as her husband, who's obviously an educated man.

And after that little clip, she says to the woman, oh, madam, tell me, what shall we do with the two of them? The fact he's kidnapped the daughter. And I really love that in her. And I remember at that time, I said to her, Vera, I really liked the way you talked to that woman. She wasn't bothered about what I liked or what I didn't like. She was so into her work. And I really admire that about her.

Judge NGASSA: Actually, not. We live in a society, which we call, you know, it's a man's world. Generally, the tendency is for men to tend to suppress women, no matter - whether they are Christians or they are Muslims or they are (unintelligible) or they are traditionalists. It just so happens that in the dual system of law that we have, both systems agree that any custom which is against the public policy is against - it's contrary to natural justice, equity and good conscience should not be applied. So we are dealing here with the balancing a conflict of laws, and, you know, and trying to make a (unintelligible).

MARTIN: And Kim, what do you say?

MARTIN: Vera, many of these stories - that many of these cases, rather, that come before you are quite heartbreaking. I mean, you, in the course of this film, we see a 14-year-old girl coming in with allegations that she was raped by a neighbor. Another young child is brought in with scars all over her body, saying that she was beaten by an aunt in whose care she's been left. Does it take a toll on you, listening to these cases day after day?

Judge NGASSA: Oh, it does. But in order to help others, you have to be strong. I mean, it wouldn't help if I break like a reed, you know, and collapse myself. There are so many people out there needing help, and I have to be strong for them.

MARTIN: And Kim, finally, what would you want people to take away from your film?

Ms. LONGINOTTO: I'd like people to watch this film and feel a real kind of bond between the people in it. I'd like them to feel that they've met Vera and they've met Beatrice, and also they've met the women struggling for justice as well - Amina Enlardi(ph) and the little girl Manka - and that they feel a kind of real solidarity with them. But actually, more than that, that, you know, Amina's struggling for a divorce, and I know that lots of people in my mother's circles of friends wouldn't have had the courage to do that. What I'd like them to see is just to see it as something that's happening - it could be anywhere -and get them to apply it to their own lives as well.

MARTIN: Judge Vera Ngassa joined us from her chambers in Kumba, Cameroon. She's featured in a documentary "Sisters in Law," which airs tonight on a PBS program, "Independent Lens." Filmmaker Kim Longinotto joined us from the phone from Amsterdam. You''ll want to check your local listings for times.