Accessibility links
Afghanistan's Air Corps Struggles to Rebuild Afghanistan's air corps has been virtually wiped out — gutted by years of civil war and left to rust by Taliban leaders. Now, the American military is urgently trying to help restore what was once a formidable force in the region. 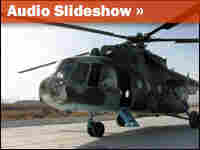 Head into the air and the hangar with the Afghan air corps. 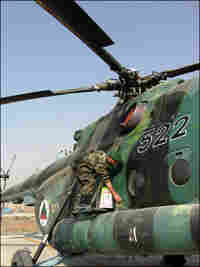 An Afghan enlisted man scrubs a helicopter with fuel to clean its hull of the country's rampant dust. Like parts and tools, cleaning agents are hard to come by for Afghanistan's air corps. Soraya Sarhaddi Nelson, NPR hide caption 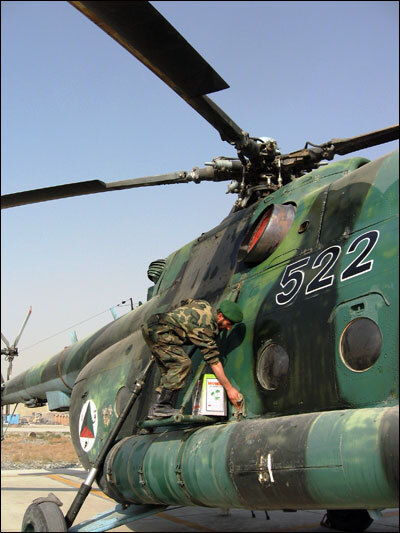 An Afghan enlisted man scrubs a helicopter with fuel to clean its hull of the country's rampant dust. Like parts and tools, cleaning agents are hard to come by for Afghanistan's air corps.

In Afghanistan, military jets and helicopters are vital to the war being waged against the Taliban and other insurgents. The aircraft are not just vital to combat, but also to troop and supply transport hampered by Afghanistan's many mountains and poor roads.

At the moment, NATO is supplying the bulk of the badly needed air power. Afghanistan's air corps is virtually wiped out, gutted by years of civil war and left to rust by Taliban leaders. What planes and helicopters survived ended up largely destroyed by the Americans six years ago.

But the American military is now urgently trying to rebuild the Afghan air corps.

This week, only 11 helicopters are working, so veteran pilot Mohammad Aref takes what air time he can get. The Afghan air corps officer says he loves flying the aging, Soviet-built Mi-17 helicopter, but he would rather be flying missions to defend his country than showing a reporter around.

His frustration is shared by others at the Kabul base that is headquarters to what was once a formidable air force in the region. A force that during Afghanistan's communist era boasted hundreds of helicopters, MIG fighter jets and transport planes.

But decades of war have left the Afghan air corps a shell of its former self. There are even fewer planes than helicopters in use, most of them old Soviet-era propeller models. Personnel, on the other hand, are plentiful, if older, as no new pilots have been trained in a generation.

Equally large is Afghanistan's need for a viable air force, given its growing war with insurgents. That the United States and NATO are filling the gap is welcome, but only somewhat.

"We are grateful for what America and the West are doing, but we need to rebuild our air corps faster," says Afghan flight commander Col. Kheir Mohammad. "We should have jets, helicopters and cargo planes, so that we can defend our borders ourselves."

The U.S. military, which is in charge of rebuilding the air corps, shares some of the Afghans' frustration. American advisers to the corps say finding comparable aircraft and spare parts isn't easy. They add that sellers are jacking up prices now that the United States has become a key buyer of Soviet-era aircraft and spare parts.

Air Force Brig. Gen. Jay Lindell leads the rebuilding effort. "We're very much at an infancy stage, you could call it that, and we are crawling in small steps to build this air corps," he says.

He adds that next week, the Afghans will get their first new aircraft — three Mi-17 helicopters from the Czech Republic. Two Antonov transport planes from Ukraine are likely to follow.

Lindell says the number of new aircraft being purchased for the Afghan air corps — mostly for transporting troops and cargo — will grow rapidly during the coming year. The American government also is spending $20 million to purchase spare parts and other supplies to keep existing Afghan aircraft flying.

Still, Lindell says it will take many more years to rebuild the air corps to the point where it can take over for NATO in Afghanistan.

"Our first priority is to meet the immediate critical need, and that's air mobility capability," he says.

This new Afghan air corps will be a far cry from the combat force it once was. But the Afghan officers, most of who worked for the force during the communist era, are reluctant to complain.

Off tape, some say they don't feel they can truly defend their country unless fighter jets and attack helicopters are thrown into the mix.

Afghan Defense Minister Abdul Rahim Wardak has been more open about expressing such demands, having asked the Bush administration to provide A-10 attack planes and Apache helicopter gunships.

But whatever tussles exist over the air corps' mission, Lt. Col. Abdul Shafi Nouri says the corps is far happier these days than during its years under the Taliban. The Afghan engineer in charge of maintenance says the Taliban didn't care whether the aircraft were airworthy. If one went down, so be it.

Nouri recalls how a Taliban official stopped his team from approaching one particular crash site. The official lifted his hands in the air and said a prayer for the dead crew.

He then sent Nouri's team away, saying the crash was God's will and merited no further review.