Accessibility links
What Role Does Syria Play in Mideast Peace Talks? Syria has chosen to attend this week's Middle East summit in Annapolis, Md., sending a deputy foreign minister after Saudi Arabia, Turkey and Egypt — among others — urged it to participate, and after Iran pressured the country to boycott the gathering.

Listen
What Role Does Syria Play in Mideast Peace Talks?

Syria has chosen to attend this week's Middle East summit in Annapolis, Md., sending a deputy foreign minister after Saudi Arabia, Turkey and Egypt — among others — urged it to participate, and after Iran pressured the country to boycott the gathering.

Edward Djerejian, a former U.S. ambassador to Syria and Israel and assistant secretary of state for Near Eastern Affairs, talks with Robert Siegel about Syria's role in the peace talks.

Don Gonyea's story on the conference on 'All Things Considered'

Uri Savir, who helped negotiate the Oslo Accord, on 'The Bryant Park Project' 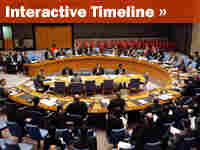 Explore a Timeline of the Mideast Peace Process Since 2000 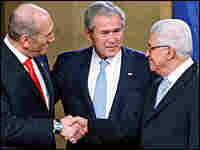 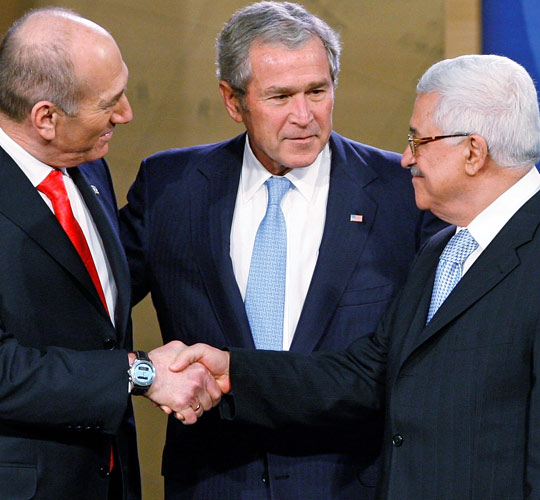 Israeli and Palestinian representatives at a Mideast peace conference reached an agreement Tuesday to begin new negotiations toward the creation of an independent Palestinian state.

"In furtherance of the goal of two states — Israel and Palestine — living side by side in peace and security, we agree to immediately launch good-faith bilateral negotiations in order to conclude a peace treaty, resolving all outstanding issues, including all core issues, without exception, as specified in previous agreements," said the statement read by Bush.

The document laid out a specific timetable for the negotiations, with the first meeting scheduled for Dec. 12. The statement said the negotiations will be "vigorous, ongoing and continuous," with a goal of reaching a deal by the end of 2008.

Permanent steering committees from each side will be set up to meet throughout the process. Olmert and Abbas also agreed to meet in person biweekly.

"We express our determination to bring an end to bloodshed, suffering and decades of conflict between our peoples; to usher in a new era of peace, based on freedom, security, justice, dignity, respect and mutual recognition; to propagate a culture of peace and nonviolence; to confront terrorism and incitement, whether committed by Palestinians or Israelis," the statement said.

"Today, Palestinians and Israelis each understand that helping the other to realize their aspirations is the key to realizing their own, and both require an independent, democratic, viable Palestinian state," Bush said.

He said both sides need to do their part to make the process work.

The Israelis "must show the world that they are ready to ... bring an end to the occupation that began in 1967 through a negotiated settlement," he added.

According to the agreement, a steering committee would develop a joint work plan and establish and oversee the work of negotiation teams, to be headed by one lead representative from each party. The first session of the steering committee was scheduled for Dec. 12.

"We will not avoid any subject," Olmert said in his speech. "While this will be an extremely difficult process for many of us, it is nevertheless inevitable. I know it. Many of my people know it. We are ready for it."

He cautioned that the "memory of failures in the near and distant past weighs heavily on us."

"I am not overlooking any of these obstacles we are likely to encounter. I see them," he said.

Abbas noted in his speech that neither Israel nor the Palestinian Authority "must beg for peace from the other."

The administration wanted the Saudis and other key Arab states at the conference to help the Palestinians and to show the Israelis that there is a prospect for a wider peace with the Arab world.

The idea of the meeting in Annapolis is to get enough international support for this latest effort and to help the Palestinians lay the groundwork for eventual statehood.

The European Union's Commissioner for External Relations Benita Ferrero-Waldner spoke in an interview Monday about the need for follow-up.

"After Annapolis, there will be an important pledging conference in Paris, where we Europeans, of course, will maintain our high levels of support to the Palestinians, but where we also want to see burden-sharing by our Arab friends," Ferrero-Waldner said.

She said the European Union and its member states together have given about $1.5 billion in aid to the Palestinians this year and are promising now to intensify efforts to build up Palestinian institutions, jumpstart the economy and keep encouraging Israelis to ease restrictions on the Palestinians.

"If there is no change on the ground, then the political process might get stuck," she said.

Just who will monitor all of this?

Ferrero-Waldner said the best option is the so-called quartet — the U.S., European Union, United Nations and Russia — a group that met Monday and will be part of the conference in Annapolis.

With reporting from NPR's Michele Kelemen and The Associated Press