Accessibility links
The Hottest Football Game You Might Not See The Dallas Cowboys and Green Bay Packers, each with 10-1 records, face off Thursday night, but much of America won't be able to see the game. The TV blackout is the result of a dispute between the NFL and cable companies.

Listen
The Hottest Football Game You Might Not See 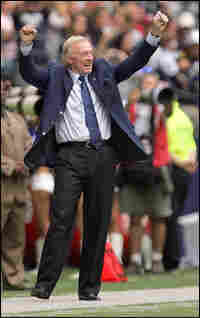 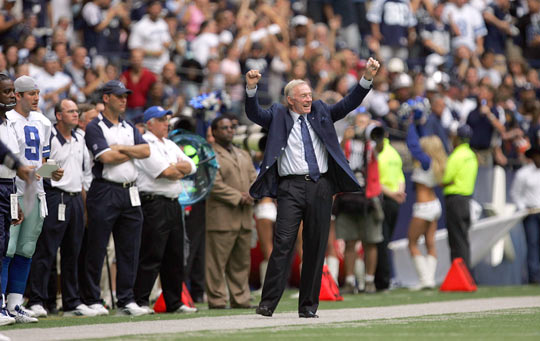 Thursday night is a sad one for our American way of life. For, you see, many millions of our fellow citizens — maybe even, yes, you — will be denied the inalienable right to watch a National Football League game on television.

Since Thomas Jefferson is not available, Jerry Jones, the owner of the Dallas Cowboys, is, if you will, carrying the ball for the NFL in defense of our Lives, our Fortunes and our Sacred Honor.

I believe Mr. Jones is citing the Ninth Amendment to our Constitution, which, sagely prefigured both football and television when our Founding Fathers wrote: "The enumeration in the Constitution of certain rights shall not be construed to deny or disparage others retained by the people."

And can there be any dispute that the certain right to watch every football game in the privacy of a man's castle or in the public house of his choice is retained ... as American as waterboarding?

But, you see, certain cable companies have had the nerve to stand in the way of the NFL's desire to make more money. Are we noble patriots going to take this? Shall we not raise our pitchforks and follow Mr. Jones as he takes his league's case to a Congress that has nothing better to do? Or, effectively, to the very streets themselves, where there he is urging maltreated fans to boycott those sniveling cable companies that would seek to contravene the dear wishes of we, the sports people?

All this began when the NFL, which ekes out a mere $3.7 billion annually in television rights money, started its own TV network, withheld eight games for itself, then pretty much told cable companies to accept their network as part of the basic cable package that goes to all subscribers at a base rate.

Several ungrateful cable companies dared answer: Hey, you're only offering us eight lousy games at three hours each, 24 hours total, in a year's worth of 8,760 hours.

So, the cable companies advised the NFL that their rinky-dink network would be placed on a premium sports tier, where those hardcore fans who wanted desperately enough to watch those eight games would have to themselves pony up something like an extra 70 cents a month for the privilege.

This rendered the league hysterical. But, gosh, hard as this may be for Jerry Jones to believe, not everybody in the Republic gives a hoot about watching the Dallas-Green Bay game Thursday night. Seventy cents seems like a pretty modest sum to pay if that be your choice.

If NPR had the same arrangement, and I was on the premium tier, that would prorate my weekly three minutes at 7 1/2 cents a month for you. Surely, you'd spring for that. Wouldn't you?

Then again, the NFL — like me — fears that once you give something away, it's hard to ask people to start to pay for it.