Accessibility links
Into the Heart of India's Underground Bone Trade Many bones used for medical purposes in the United States and Europe were originally stolen from graves in Calcutta, India. Despite changes in laws, the bone trade is going strong.

Listen
Into the Heart of India's Underground Bone Trade 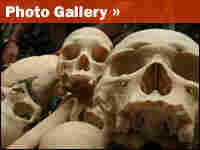 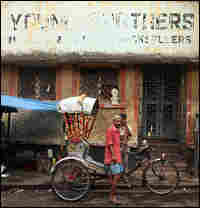 Young Brothers, pictured here, has excelled at the underground bones trade. "They took the bodies from the river, from the graveyard and from the hospital," says a former employee, who requested to remain anonymous for fear of retaliation. Scott Carney for NPR hide caption 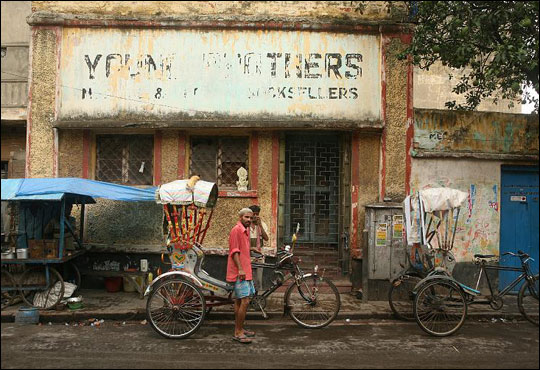 Young Brothers, pictured here, has excelled at the underground bones trade. "They took the bodies from the river, from the graveyard and from the hospital," says a former employee, who requested to remain anonymous for fear of retaliation. 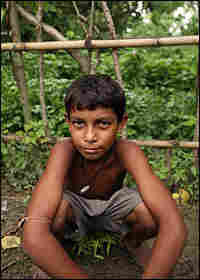 A boy guards a graveyard from robbers near Harbati. Scott Carney for NPR hide caption 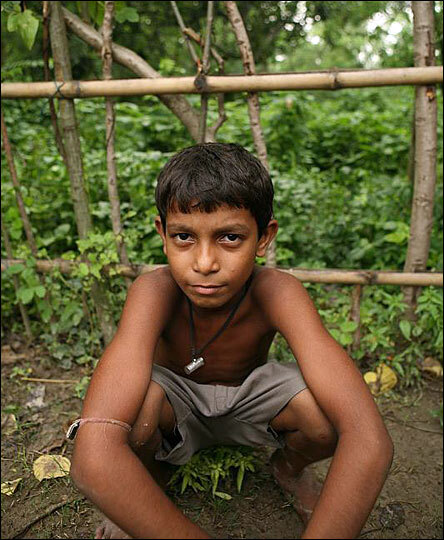 A boy guards a graveyard from robbers near Harbati.

Medical students across the world rely on anatomical models to become informed doctors. What many don't realize is that a large number of these models are stolen from graves in Calcutta, India.

For 200 years, the city has been the center of a shadowy network of bone traders who snatch up skeletons in order to sell them to universities and hospitals abroad. In colonial times, British doctors hired thieves to dig up bodies from Indian cemeteries. Despite changes in laws, a similar process is going strong today.

Throughout parts of Calcutta, many of the cemeteries have been empty for generations.

"When I die, when I'm gone, my body will also be stolen," says Mohammad Jinnah Vishwas, a farmer who lives in the village of Amdanga. "Before we didn't understand where all the bones were going, now we know that they were taken by criminals."

A legal multimillion-dollar business throughout the 1970s, the export of human remains was banned by India in 1986 following rumors that traders were murdering people for their bones. The new law pushed most of the major companies out of business.

"It is kind of a sad situation because [my father] loved the business so much, and he saw it drift away from him," says Craig Kilgore, whose family founded Kilgore International, which at one point was the principal supplier of bones to the United States.

At least one organization, however, has managed to survive underground. Most prominently, a firm called Young Brothers — located conveniently between the city's biggest morgue and largest cemetery — has excelled in the black market. It has taken a bold approach — advertising its bone selection in catalogues and going to extreme measures to maintain its supply, according to a former clerk who requested anonymity for fear of retaliation.

"They took the bodies from the river, from the graveyard and from the hospital. More than 5,000 dead bodies I have seen," she says.

In 2001, Javed Ahmed Khan, Calcutta's health department chief, started receiving complaints about Young Brothers. The main storefront, neighbors said, was emitting a stench so horrible that it could be detected several blocks away. Neighbors also reported that they had seen bones drying on the roof and skeletons boiling in massive tubs.

A raid against the business, led by Khan, confirmed suspicions.

"I went inside and saw two rooms full of human skeletons. There were huge bowls where skeletons were dipped to remove the fats and all that," Khan says.

In addition to three truckloads of bones, Khan said, he found invoices for shipments headed to the United States, Europe and Singapore. Despite the evidence, the owner of Young Brothers was released just a few days later.

"We won the case," says Vinesh Aron, the proprietor of Young Brothers. He denied a request to be interviewed, but when asked whether skeletons were recovered from his building, he said, "Those were all export materials." This answer hits on the hollowness of the rules governing the bones trade.

Laws Without Much Weight

Under the law, any bones being exported are technically "illegal" — but the question for police is often whether they are illegal enough to bother prosecuting.

That became evident again in May, when police intercepted a massive cache of human remains along a well-established smuggling route. The bleached white bones from over 100 people could have fetched around $70,000 had they made it to the United States. Whether the goods will ever be submitted as evidence in court is unclear.

"It depends on the seriousness that society places on it," says Rajeev Kuman, director inspector general of police in Calcutta.

Kuman says he doesn't have enough resources to enforce the law. The fact that it's legal to import the bones into the United States and Europe, and that the "victims" are already dead, only serves to make the situation that much murkier.

Few retailers in the United States posses a steady supply of human bones. Those that do often purchase them through a chain of middlemen that spans the globe. The longer the chain, the easier it is to avoid considering the nature of that primary link.