Accessibility links
Sharon Jones Is 'Nobody's Baby' Jones and her band The Dap-Kings have been recording and touring together since 2005. On their third album, 100 Days, 100 Nights, they sound better than ever. Jones recently took a break to dish on her band and a few of her high-profile collaborators.

'How Long Do I Have to Wait for You?" (Ticklah remix)

'Stranded in Your Love' (Cool Calm Pete - Sweet Nothing Mix)

Sharon Jones, head of the old-school funk and soul band Sharon Jones & The Dap-Kings, is working it. She and her band have a new album, their third, called 100 Days, 100 Nights. They've been touring to support the album, and Jones was recently part of the cast of Berlin, along with Lou Reed. She also shot a part for the upcoming Denzel Washington film The Great Debaters. 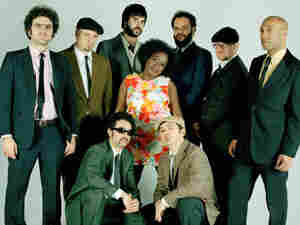 Jones shares a hometown with the Godfather of Soul himself, James Brown. Though she moved to Brooklyn, N.Y., when she was little, she spent months of every year in Augusta, Ga., singing and dancing to his music. That and her early start singing in church have flavored the songs she sings now. She's come all the way from working as a prison guard on Riker's Island to being hailed as a "timeless soul singer" by The New York Times.

Gabriel "Bosco Mann" Roth, co-founder of Daptone Records and bass player for The Dap-Kings, talks about the band's increased involvement in songwriting and arranging on 100 Days, 100 Nights. He wrote many of the songs himself, including the title track. The Dap-Kings' members have kept busy, as well. They backed Amy Winehouse on several tracks off her album Back to Black, including "Rehab" and "You Know I'm No Good," and they served as her band during her first tour in the U.S.