Accessibility links
Fall Out Boy Rewrites the Gender Roles of Rock As the frontman for pop-punk band Fall Out Boy, Pete Wentz glories in remaking the rules. He playfully subverts gender roles to undercut homophobia by wearing eyeliner, kissing his male bandmates on stage and wearing girls' jeans, yet somehow makes it all mainstream.

Listen
Fall Out Boy Rewrites the Gender Roles of Rock 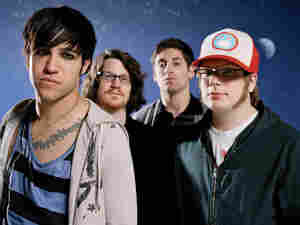 Pete Wentz glories in remaking the rules. He's the frontman and bassist for the wildly popular pop-punk band Fall Out Boy, and although he is signed to a major label, he owns the company that makes his own merchandise, he produces other bands on his own label, he owns a nightclub and a film production company and he avidly blogs back and forth with his fans.

Wentz has inky black hair, a goofy grin and a predilection for wearing eyeliner and girls' jeans on his alley-cat-skinny frame, and he kisses his male bandmates on stage. Somehow, Wentz makes all of this mainstream.

In fact, Wentz showed off his eyeliner techniques on the People magazine Web site after being named one of the year's Most Beautiful People. Wentz calls his eyeliner "guyliner."

"I started wearing it because I felt like it tested some boundaries," Wentz explains. "Smear it. Because if you're a guy, you don't want your makeup to look perfect."

The frontman acknowledges his debts to David Bowie, Marilyn Manson and Kurt Cobain, his heroes in playful gender subversion.

"My whole point is I think there's something in art where you should be making people feel uncomfortable."

For Wentz, part of that means calling out homophobia, still pernicious in rock and in high schools — places where Fall Out Boy is something of a cult to millions of fans.

"I would never come out and say I'm gay, because I'm not gay," Wentz says. "There's part of me that kind of wishes I was gay, and I think that comes from anybody constantly wishing they were in the minority and constantly wants to be fighting everybody off."

Fan ardor for Wentz is undiminished by inevitable online rumors that he is secretly gay. Wentz certainly likes to play with the idea — he sometimes swaps "he" for "she" in his lyrics — but also reveals his sensitivity.

Out Magazine's online editor, Shana Krochmal, says it's a good way to get girls and make a statement about yourself.

"Fall Out Boy isn't alone in figuring out that appealing to gay fans or appealing to friends of gay fans or just people who don't consider themselves homophobic is a great marketing strategy," Krochmal says.

It's certainly become part of Pete Wentz's brand, inspired by the original pop-culture miner, Andy Warhol. Wentz owns a bar in New York, a clothing line and a boutique record label that allows him to find and groom bands that share his aesthetics and ethos. Vanity labels are standard for rock stars, but Wentz has an uncommon knack for sniffing out groups like Panic! at the Disco. That band's very first record, A Fever You Can't Sweat Out, went platinum.

Panic! at the Disco was started by a high-school student who relentlessly posted messages on Wentz's blog. Krochmal says that Wentz helped the band take over the airwaves and MTV while encouraging its members to wear flamboyant makeup and kiss each other on stage.

"This isn't clearly something that bands on any label would get away with or certainly be encouraged to do," Krochmal says. "And I think you see the Pete Wentz effect on masculinity being extended through these other bands he's supporting, both financially and as their mentor."

Krochmal says that Wentz's confessional bravado — everything from his struggles with depression to sexuality — reflects the thinking of young consumers, the long-standing target audience of the music industry.

Of course, for every Wentz there's an old-school macho guy like Kid Rock. But Wentz is part of a wave of male musicians, including other successful bands like My Chemical Romance, surfing the sexual politics of rock.