Accessibility links
Dee Dee Bridgewater's 'Red Earth' in Concert When Dee Dee Bridgewater stepped on Malian soil, it was red, just like the ground in Memphis, her birthplace. People were friendly, even familial, and in a tiny Bamako cabaret, Bridgewater jumped onstage and started to sing. She brings that joy to the Kennedy Center in her Grammy-nominated Red Earth: A Malian Journey.

Extras from the Concert 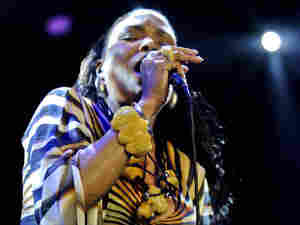 Sitting in for Dee Dee Bridgewater on this show is Georges Collinet, host of Afropop Worldwide from Public Radio International. As Collinet has said for years on Afropop, Mali in West Africa is home to a vibrant music scene that draws people from all over the world, especially to the capital city. When Bridgewater stepped off the plane in Bamako, she immediately felt the friendliness of the people and noticed that the color of the ground –- red –- was just like that in her birthplace of Memphis, Tenn.

Her feelings intensified when she went out to hear the music. In Mali, Bridgewater jumped onstage and started to sing.

This time on JazzSet, the excitement that began in a tiny Bamako cabaret comes to the Concert Hall at the John F. Kennedy Center for the Performing Arts in Washington, D.C., as Bridgewater presents music from her newest CD, the Grammy-nominated Red Earth: A Malian Journey.

Hand-crafted African instruments set the stage. Lansine Kouyate's balafon is a wooden xylophone, with hanging calabash gourds that buzz when he plays. The balafon is a precursor to the vibraphone in jazz. The African kora is a precursor to the harp, while the n'goni is a forerunner of the banjo. Along with two African percussionists, there's also Bridgewater's drummer, Minino Garay, from Argentina and France. Garay plays the cajon, a wooden box drum from Peru. Edsel Gomez, born in Puerto Rico, adds piano power with a Latin edge. Musical Director Ira Coleman plays a stand-up electric bass.

One by one, Bridgewater welcomes two guest singers. Kabine Kouyate comes from a griot family. A griot is a male singer who keeps the village history as an oral tradition. For host Collinet, the griot singers "carry all the nostalgia of the Malian soul. Kouyate's voice makes me almost cry."

Mamanita Keita sings in bambara, a language of northern Mali, and is also a remarkable dancer. She joins Bridgewater on "Children Go Round," featuring n'goni, and a web extra, "Djarabi."

Amid this loving feast of jazzy world music, the dramatic high point comes when Bridgewater sings "Four Women," written in the mid-'60s by Nina Simone. In the fewest, starkest words imaginable, the lyrics sketch four African-American women. In between, there are solos from the balafon, the piano and finally the kora. Bridgewater's interpretation will stay with you long after the music is over.