Listen
Harnessing the Power of the Gulf Stream 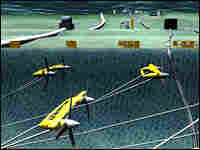 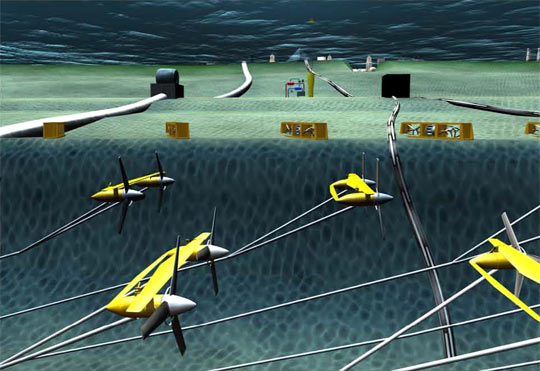 A series of underwater turbines could harness the Gulf Stream's energy, researchers say. 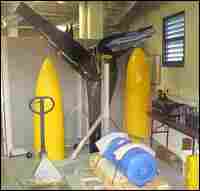 This 10-foot-diameter rotor at a research center in Dania Beach, Fla., is about one-tenth the size of those that will be used in full-sized turbines. The yellow fiberglass nacelles will house the pressure tank holding the generator seen at the bottom of the photo. Greg Allen, NPR hide caption 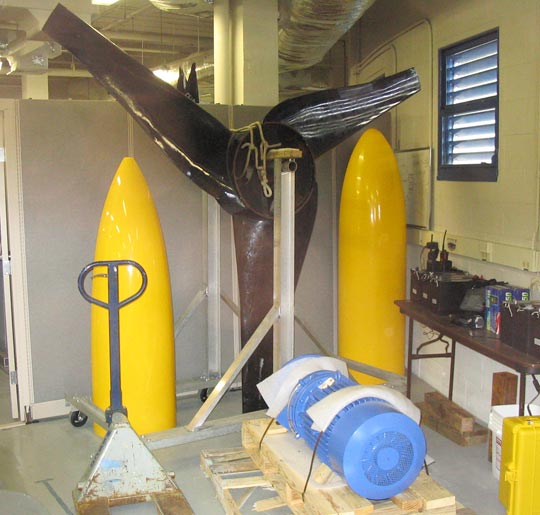 This 10-foot-diameter rotor at a research center in Dania Beach, Fla., is about one-tenth the size of those that will be used in full-sized turbines. The yellow fiberglass nacelles will house the pressure tank holding the generator seen at the bottom of the photo. 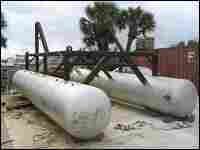 An observation and control buoy will hold winches, cameras, communications gear, and all the equipment needed to monitor the performance of the prototype underwater turbine. Greg Allen, NPR hide caption 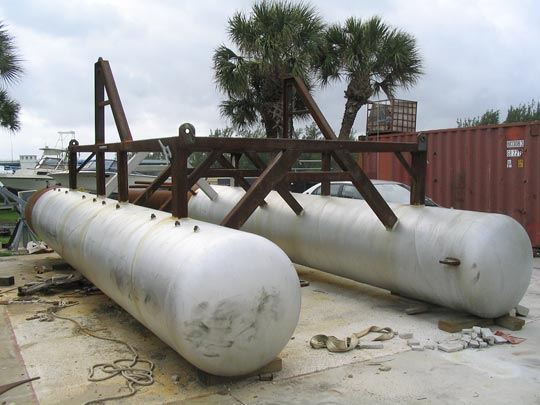 An observation and control buoy will hold winches, cameras, communications gear, and all the equipment needed to monitor the performance of the prototype underwater turbine.

A chart of the Gulf Stream based on Ben Franklin's sketches, circa 1786. Library of Congress hide caption 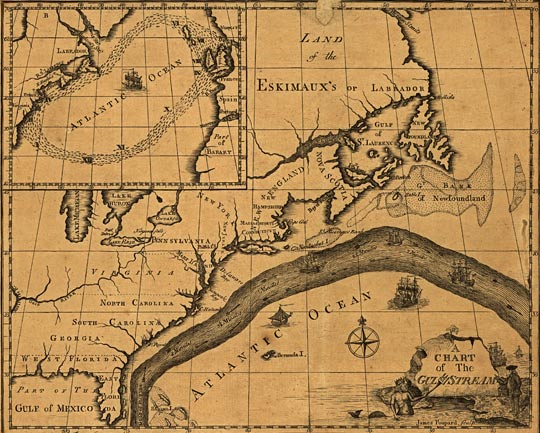 A chart of the Gulf Stream based on Ben Franklin's sketches, circa 1786.

The power of the Gulf Stream was first recognized by America's earliest explorers. Christopher Columbus took note of the heightened current as he approached the Caribbean. But Ponce de Leon is generally credited with discovering this warm "river in the ocean" in 1513 on his voyage to Florida in search of the Fountain of Youth.

Over the next two centuries, the Gulf Stream was used extensively by whalers, fishermen and sea captains seeking to speed their passage in the Atlantic north and east to Europe.

It may have been Benjamin Franklin who gave the current its name. As U.S. postmaster general, he pondered complaints that European mail traveling west to America took much longer to arrive than U.S. mail traveling east across the Atlantic. He printed what many believe to be the first map of the Gulf Stream in 1769.

Proposals to harness some of the energy of the powerful current have been around since Thomas Edison became interested in it in the late 19th century.

During the Arab oil embargo in the 1970s, the federal government became interested and sponsored a short-lived research program. Currently, there's no federal money involved in this first real effort to generate power by using the Gulf Stream.

Oil has powered the growth of the United States, but there's increasing worry about America's heavy reliance on the fossil fuel. President Bush has gone so far as to call that dependence an "addiction." An NPR series examines some alternative sources of energy.

In Washington recently, Secretary of the Interior Dirk Kempthorne made an announcement that clears the way for a new and largely untapped renewable energy resource — the oceans.

He announced regulations that would "guide the use of wind, wave and current resources on the 1.8 billion acres of Outer Continental Shelf on the coasts of the Atlantic, Pacific and Gulf Coast."

In South Florida, researchers are already working to harness the power of one of the ocean's most energy-dense currents — the Gulf Stream.

The Center of Excellence in Ocean Energy Technology is only a little more than a year old, but it's in a great location. It's just off the beach and, as director Rick Driscoll points out on a map, it is just 15 miles from the Gulf Stream.

"This is actually the closest location of any place on the planet of a major ocean current by a load center that needs the power now," he says. "We have no place to build power plants and yet we're growing. Florida is growing by a thousand people a day."

Driscoll's answer: underwater turbines moored in the heart of the Gulf Stream. He believes that ultimately, the current — which flows at 8 billion gallons per minute — could yield as much energy as several nuclear plants, providing one-third of Florida's power.

Florida Atlantic University established the center last year for one purpose: to explore ways to tap the ocean's potential as a renewable energy resource. It was started with a $5 million grant from the state of Florida.

Inside, the center's offices and workshop area share a common space. Desks and cubicles sit alongside scientific equipment, giant floats, and what looks like a large propeller. It's 10 feet in diameter, but as turbine rotors go, that's actually quite small, Driscoll says.

The full-sized turbines will be much larger — with rotors 100 feet in diameter.

This rotor is for the small prototype Driscoll and his team are building. Pieces of it — the generator, pressure tank and housing — are laid out on the floor. It's nearly ready for testing.

Driscoll eventually envisions a field of turbines moored 1,000 feet below the surface, just off the Florida coast in the heart of the Gulf Stream. Dozens of energy companies are developing plans to harness the Gulf Stream, he says. The researchers at the Center of Excellence in Ocean Energy Technology are studying the best ways to do it and looking for possible negative consequences.

"Some of the worst-case things we can see is what people have coined the 'Cuisinart effect' in which fish come through and get chopped up," Driscoll says. "The bait would then attract more fish and you've got a sustaining Cuisinart effect. We don't think that's going to happen, but it's a possibility, and we need to monitor it."

Driscoll says his team is also looking to see what effect the turbines could possibly have on the power and flow of the Gulf Stream. He cites hydrographic data reassuringly, and says it looks unlikely that it will have much of an impact. And even the most optimistic researchers don't hope to extract more than one-third of the Gulf Stream's total energy.

A few steps outside, welders are working on one of the most massive parts of the Gulf Stream turbine. It's a huge steel buoy that, as project director Gabriel Alsenas points out, is shaped like a ship so it remains stable in the current.

The buoy is part of a system — tethered to a 30,000-pound anchor — that Alsenas says will hold the prototype turbine right in the heart of the Gulf Stream. The turbine will be about 30 feet under water, spinning approximately 60 revolutions per minute, he says.

Weather and federal regulations permitting, researchers hope to begin testing their prototype turbine in January or February. If all goes well, they eventually will develop a full-sized turbine and maintain an area in the Gulf Stream that will be used as a test field.

For Driscoll, the center director, this project is just the beginning of an industry that he believes has great potential not just for Florida, but for the world. Elsewhere, some energy companies have already begun to explore the use of tidal currents as a power source.

Driscoll says his center is beginning to study an even more powerful potential energy source — the large reservoir of cold water deep in the oceans. One obvious use would be to use the cold water in air conditioning.

But there's even greater potential he says, in using the temperature difference between the cold bottom water and the warm surface water to generate electricity.

Driscoll says that by investing in ocean energy technology, Florida will do more than just fill its power needs. It will create jobs and make the state a leader in an emerging industry.