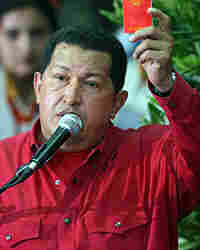 Venezuelan President Hugo Chavez has extended his family's influence in his home state. He is also pushing to overhaul the constitution in a bid that would enable him to reshape the government. Juan Barreto/AFP/Getty hide caption

Venezuelan leader Hugo Chavez is seeking to extend his powers and, perhaps, his term as president in an upcoming constitutional referendum.

Chavez says he needs both to better install his brand of socialism in the country. The referendum package introduces new legal concepts such as "social property" and "collective property."

During his eight years in office, Chavez's family members have managed to increase their personal power and wealth.

Chavez's hometown, Barinas, is located in southwestern Venezuela and has long been defined by the vast hot and grassy plains – or llanos – that surround it.

The state, also called Barinas, is famous for its cattle culture and llanera, music that tells stories of poverty and hardship, and is laced with nationalist sentiment.

In Lamento Bolivariano, llanera singer Reynaldo Armas sings about how injustice and corruption are thwarting the dreams of national prosperity envisioned by independence hero Simon Bolivar.

Born in Sabaneta — a poor, rural village near Barinas — he grew up in a house with a dirt floor, a roof made of palm leaves and limited electricity.

Flor Figueredo lived down the street and was a close friend. Recently, she sat on her porch and remembered when Chavez was a teenager and spoke of wanting to help the poor.

"He made a comment that with so much oil here in Venezuela, look at how the streets were. I said, 'Yes, Hugo, look how depleted this town is.' And he said, 'This country has to change direction,'" Figueredo recalled.

The country has changed direction — and so has Barinas. Today, the Chavez family is the most powerful family in the state.

The president's father, Hugo de los Reyes Chavez, was once a school teacher. Now, he is the state's governor.

Anibal Chavez, one of the president's six brothers, is mayor of Sabaneta.

And another brother, Argenis, is secretary of state in Barinas — a position created for him that does not exist anywhere else in the country.

Family members echo the president when they speak in public, promoting Hugo Chavez's brand of socialism and railing against his enemies.

On a sweltering day in a small town outside Barinas, Argenis Chavez spoke at an event honoring Simon Bolivar — the inspiration for Chavez's Bolivarian revolution.

"We can tell the North American empire that behind the revolution they want to destroy, there are millions of men in Venezuela willing to fight," he told the crowd.

The president is popular in Barinas, but opponents said that the Chavez family has become a power unto itself.

"Today they are all tycoons, they are rich people who look like royalty. ... It's a kind of new oligarchy," said Leonardi Meza, a leader of the opposition movement National Resistance Command.

Family members deny these charges, but it is clear they have more prestige than they once did.

The small house Hugo's parents occupied before their son became president still sits in a lower-middle class section of Barinas, encircled by a brown iron gate.

It is a big contrast with the home they occupy today. The immense governor's residence is nestled behind a high turquoise wall among tall trees and flower gardens.

Narciso Chavez, one of the president's younger brothers, talked about his family near an oil painting of his famous brother wearing military fatigues.

Nacho, as he is nicknamed, is a director of an exchange program between Venezuela and Cuba that helps the poor in Barinas get medical attention.

He said his family echoed the president's commitment to fighting consumerism and helping the poor. He said with pride that instead of buying a new SUV, he still drives a beat-up 1973 Chevrolet Camaro.

"As a public official, you have to be an example of honesty and sincerity," he said. "The people who do the opposite, logically, can't be called socialists."

The president's mother, Elena, also dismissed the notion that her son's success had lifted her family from rags to riches.

She sat next to a wooden bust of Hugo, her second-born child, in a small office at a state children's foundation she runs.

She was stylishly dressed and coiffed, but she said her wardrobe was demanded by the job.

"I have to put on clothes at least more appropriate for the position. But I feel that I'm the same. Humble. Yes. If it weren't that way then I wouldn't be seeing you," she laughed.

Still, the days when her sons lived on a dirt floor are a distant memory.

The president's mother travels around Barinas in a large escorted SUV. She said she avoids international travel because she doesn't like leaving her two Maltese dogs at home alone.