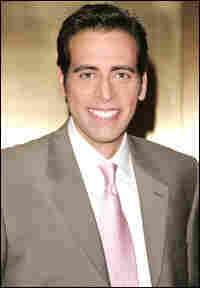 "Mas Vale Tarde" is the latest entry in the late-night talk show field. It has all the usual elements, the hot band, A-list celebrities, stand-up, with one unique element: It will be broadcast in both English and Spanish. It premieres tonight on Telemundo. The show hopes to reach a younger and fast-growing Hispanic market.

And Alex Cambert is the host of "Mas Vale Tarde." He joins us now from Los Angeles. Welcome.

Mr. ALEX CAMBERT (Host, "Mas Vale Tarde"): Thank you so much. By the way, I like the way you said "Mas Vale Tarde." I - we - my peoples appreciate that.

MARTIN: And what's your heritage, if you don't mind my asking?

Mr. CAMBERT: I am Cuban-American. I was definitely born here in the United States. My parents came over from Cuba, and then like all Cuban people, we migrated to Miami.

Mr. CAMBERT: Cuba north, as I like to call it.

MARTIN: The name of the show, translate.

Mr. CAMBERT: So that's the name of the show.

MARTIN: And what attracted you to this project?

Mr. CAMBERT: No. But you know what? I have a friend who just happens to be the president of Telemundo, who's a good friend to have if you're a Latin host.

Mr. CAMBERT: And he and I have been talking about returning to Telemundo, what kind of show would I want to do? And I've always been a fan of late-night. I mean, my grandfather and I used to watch, when I was little, Johnny Carson. He'll wait until my parents were asleep, and he'd wake me up and we'd watch it together.

Mr. CAMBERT: So you've never laughed so hard until you've seen a Cuban man watch, like, American television because he didn't understand what he was saying, and he'd go, here Johnny.

Mr. CAMBERT: It's the genre that I loved. And, you know, he said, Alex, do you want to do late-night? You know, Spanish TV doesn't usually have late-night. And I was like, well, it's about time.

MARTIN: Well, who do you think is going to list to watch this program? And is it really going to be bilingual, or is it going to only be - I guess what I'm seeing in the demo clip that we saw, you switched back and forth easily.

Now, I'm going to switch over to English in deference to our audience…

MARTIN: Very impressive. But is it going to be mostly Spanish with - only if you have English-speaking guests, and then you'll switch to English? Or is it really going to be bilingual?

Mr. CAMBERT: Thanks. I mean, when you ask me of my comedic point of view, for example, I say it's "Arroz con Brady Bunch," meaning it's sort of the best of both worlds. And when the joke is relevant to say in English, I'm going to say it in English. When it's about Spanish-speaking cultures and, you know, what is relevant to that segment of the population, I'm going to speak in Spanish.

Mr. CAMBERT: I agree with those folks, Hispanics know what Hispanics want. That's why in the next couple of months, you're going to see me get pregnant, get married, get divorced, go to jail, go blind in one eye…

Mr. CAMBERT: …then get out of jail just in time to take revenge on my evil twin brother who suffers from amnesia.

Mr. CAMBERT: And I need some dramatic music please.

Mr. CAMBERT: First and foremost, we are on Telemundo, so we are a Spanish-speaking show that will liberally include a lot of English. So you are right when you said when we have an English guest like George Clooney, I mean, he's George Clooney. He ain't Jorge Clooney.

Mr. CAMBERT: So, I mean - unless you know something I don't know. And then we will speak to him 100 percent, you know, in English with a little bit of Spanish thrown in.

MARTIN: And will there be subtitles in both languages?

Mr. CAMBERT: Surprisingly, people will be able to follow it, I think. You know, we're structuring the show in such a way that it has enough elements of both where you're going to see it. Now, the show is available, by the way, with English subtitles. I mean, it's like reverse SAP.

MARTIN: But that raises that question. Is part of the appeal of the program you think that you, as a Latino, you get to kind of dig each other and stuff, you know, in-group stuff in way that you perhaps might not feel comfortable doing on a more general audience venue?

Mr. CAMBERT: Without question. I can joke about my mama, but you can't is sort of the philosophy about it.

Mr. CAMBERT: And you can trust us, because we are Latinos and we deliver.

Mr. CAMBERT: We deliver pizza, we deliver pasta with all the flavors.

Mr. CAMBERT: There were things that, as a Latino, I can take liberty in saying and joking about our people. And they're in on the joke. I mean, telenovelas, we know our dramatic. Latinos don't go around saying, Michel, please, give me that cup of coffee.

Mr. CAMBERT: I mean, they're over the top, but they're part of our culture. They're interwoven into the fabric of Latin television. So I've got to take some shots at it.

Mr. CAMBERT: I think we should push buttons. I think I like that comedy can encourage a dialogue. But I think it all has to come from an organic place in terms of comedy. Now, in terms of Latino culture in general, it's not a monolith. And so what you realize is that Cubanos, Boriquas, Mexicanos, you know, people from Centro and Sur America, we're all different, and we all have our different sort of cultural heritages, our different words, even. And what I'm trying to do is this show is about U.S. Latinos. And what we have in common is that we're all here. And we all have the same hopes, dreams and aspirations for our kids. So there are much more commonalities than there are differences.

MARTIN: Okay. Now, who do you going to have on tonight?

Mr. CAMBERT: We are going to have on - it's an interesting mix, because we are going to have on Kate Del Castillo, one of People in Espanol Magazine's stars of 2007, and now she's given up her life as this huge telenovela star in Mexico to get into Hollywood. And she has accepted really interesting and small roles here in Hollywood in order to make a name for herself. We also have Oscar nominee Eric Roberts, who's agreed to be our first guest and try this bold experiment. And so it'll be fun to have him on the show.

Mr. CAMBERT: So it's a really interesting mix, because I want to show to people particularly, that Latinos come in all shapes, colors, sizes. We aren't one thing.

MARTIN: Well, good luck to you.

Mr. CAMBERT: Oh, thanks. Are you going to be watching?

MARTIN: My invitation to the launch party must have gotten lost in the mail.

Mr. CAMBERT: No, no, no. You've got it. It was just written in Spanish.

MARTIN: I would understand what time to show up, and whether there would be snacks.

Alex Cambert is the host of "Mas Vale Tarde," the bilingual late-night talk show. It premieres tonight on Telemundo. He spoke with us from Los Angeles.