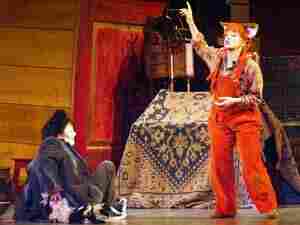 When operas first appeared about 400 years ago, they tended to be based on great stories of the Western tradition — mythological tales and historical legends.

The first great opera ever composed, Monteverdi's Orfeo, is a good example. It's based on the legend of Orpheus, the musician and poet who journeys to the underworld to bring back his dead wife, Eurydice.

These days, new operas aren't always so traditional; it seems we've come a long way since Monteverdi. A Russian composer, Vitali Okorokov, has written an opera called Monica Lewinsky, featuring an aria — sung by a CIA director — called, "I did not invite you, Monica, for a cocktail."

Then there was a recent opera in London by composer Richard Thomas, called Jerry Springer: The Opera. It may sound preposterous, but it earned 8 nominations for the Laurence Olivier Awards, the top theater accolades in London.

Still, today's opera composers aren't the first to begin thinking outside the box. Early in the last century, Leos Janacek created brilliant operas out of what, on the surface, appeared to be equally loopy ideas. In 1920, he set part of one opera on the moon. The odd creatures living there turn out to be fussy art aficionados.

A few years later, Janacek turned to another offbeat source for operatic inspiration — the comics. He turned a serial comic strip from a local newspaper into The Cunning Little Vixen, one of Janacek's most touching and inventive operas. The "Vixen" is a female fox — not a cinematic sexpot or a soap opera star — and Janacek's score tells an ingenius tale, populated by forest and barnyard animals, that has become one of the 20th century's most popular musical dramas.

On World of Opera, host Lisa Simeone presents a production of The Cunning Little Vixen from Houston Grand Opera, sung in English and starring Lisa Saffer in the sharp-eared, title role.