Accessibility links
Businesses See Green in Iceland's Volcano Power Iceland's winters are long, dark and cold. But one of the country's favorite winter hobbies is to take a swim in outdoor heated pools or lounge in backyard hot tubs. Heat and electricity are cheap, clean and plentiful here — and Iceland wants other countries to take notice. 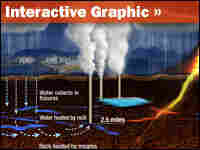 Volcano Power: How Energy Is Produced from Hot Rocks 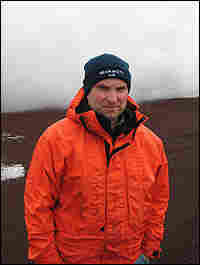 Engineer Bjarni Palsson stands in front of manmade steam geyser at the Krafla power plant in northern Iceland. After drilling a well thousands of feet into the ground, engineers let the steam blow out of the well head to measure its pressure and productivity. After that, they cap the well head and direct the steam into pipes that carry it down toward the power plant. Vikki Valentine/NPR hide caption 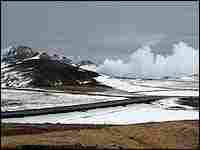 Steam from the Krafla power plant billows from behind a mountain. Richard Harris/NPR hide caption 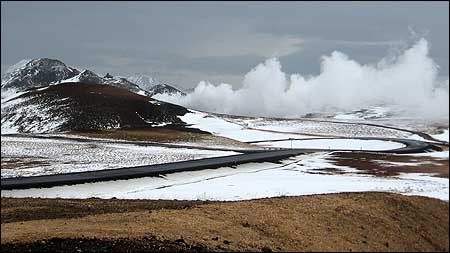 Steam from the Krafla power plant billows from behind a mountain.

A sheep separated from its flock wanders around the Krafla power plant. Vikki Valentine/NPR hide caption 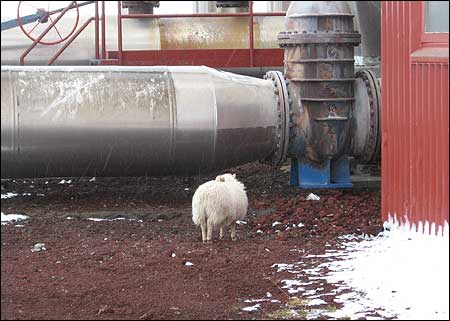 A sheep separated from its flock wanders around the Krafla power plant. 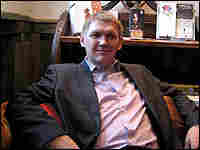 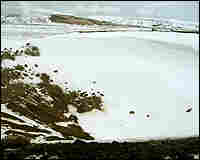 The landscape around Krafla is pitted with craters -– from volcanic and manmade explosions. This crater, called "manmade hell," is left over from a steam explosion in a well gone wrong several decades ago. Richard Harris/NPR hide caption 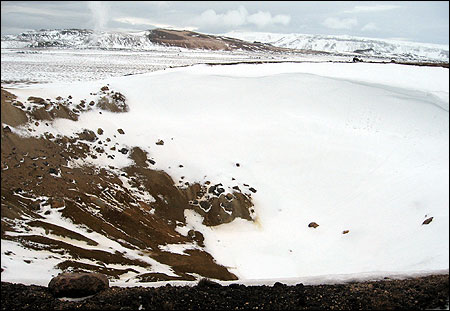 The landscape around Krafla is pitted with craters -– from volcanic and manmade explosions. This crater, called "manmade hell," is left over from a steam explosion in a well gone wrong several decades ago. 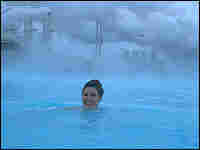 Hot water piped up from underground feeds outdoor pools throughout the country. Here, a woman swims at Blue Lagoon, with a geothermal plant behind her. Dave Allocca/DMI/Time Life Pictures/Getty Images hide caption

Representatives from the world's nations are starting to gather in Bali, Indonesia, for two weeks of meetings on climate change. They want to decide how to tackle the problem of rising greenhouse gases after the Kyoto agreement expires. One part of the solution will be to get more energy from sources that don't fill the air with carbon dioxide.

In Iceland, that means tapping into the Earth's own heat. This North Atlantic island is cold and frosted with glaciers, but it owes its existence to hot rock. Volcanoes continually build and reshape the landscape, and those hot rocks make an ideal energy source — one that's much cleaner and less expensive than burning fossil fuels.

Energy from these hot rocks powers lights in homes and restaurants, and provides the hot water that heats 95 percent of Iceland's homes. Icelanders even go outside in the middle of winter with almost no clothes on for laps in city swimming pools or backyard hot tubs.

Iceland's austere landscape is also sprinkled with bubbling, stinky and sulfurous mud pots — an unmistakable sign that this place is alive with volcanoes.

Hot liquid rock oozes up from deep in the Earth and gradually reshapes this island. That heat is also ideal for producing electricity. And Icelanders take advantage of that. For example, they have built a power plant in the midst of a rugged black and red moonscape. The Krafla power plant sits by a steaming creek in a treeless valley. It's fed by silver pipes that carry steam down from the barren hills that surround it.

Power plants like Krafla are easy to spot – they're peppered with huge, manmade steam geysers. They're essentially channeling free energy from underground.

But harnessing this power, by drilling deep holes into volcanoes, turns out to be dangerous business. Krafla's construction in the 1970s was interrupted by dramatic eruptions at a nearby volcano.

And even when that eruption subsided, there were other troubles.

Engineer Bjarni Palsson from the national power company takes us through the rain to the edge of a large crater in the hills above the Krafla power plant.

"Well No. 4 in this area was being drilled at this site here when suddenly an underground steam explosion managed to get its way to the surface," he explains.

People drilling the hole with a giant rig were just able to pull it out of the way and get to safety when the steam exploded and dug a crater that's more than 100 feet deep and about as wide. Palsson peers down into it and shakes his head.

"This is a very good lesson," he says. "Before we start any project or especially if we have new people here, we take them here and tell [them] this is what can happen if you make the slightest mistake."

They named the crater "manmade hell" and moved on. Another well had to be abandoned when the drillers hit red-hot molten rock. It shot up through the hole and onto the surface, obviously ruining the hole, but at least not claiming any lives.

So, success in this business means you need to know how to read the geology deep underground in order to tame the power of volcanoes. Icelanders have learned those lessons the hard way, and they have built up a world-class geothermal energy business in the process.

"Most of the geothermal development for the last 10 years has been in Iceland," says Asgeir Margeirsson, who heads up a new geothermal company called Geysir Green Energy.

"There has been a lot of development here, whereas there has been some sort of stagnation in the other countries, and not too much development, like the U.S., New Zealand or Italy. Until recently," he says.

We meet Margeirsson back at the Viking hotel in Reykjavik. He tells us this city now relies on geothermal energy, along with hydroelectric dams for its electricity. And the city also gets its hot water directly from underground.

"In the '60s, every single home had an oil tank in their back yard and there were oil trucks running around the streets pouring oil into these tanks. And at that time, the heating costs for homes was similar with oil and geothermal," he says.

But Reykjavik took a big gamble. It drilled wells to tap into underground hot water, then built a system of pipes throughout the entire city to circulate this hot water through radiators in homes and offices. The gamble paid off big time.

"Today, it would cost us five times more to heat our homes with oil than it is costing with geothermal," Margeirsson says.

People in this far northern country barely even think about their heating bills — and they leave their windows cracked even when it gets cold.

Margeirsson's company is now in business to export this technology to other parts of the world. It's good for the climate, since it doesn't involve burning fossil fuels. And it's becoming more attractive, even in places that aren't as obviously volcanic as Iceland. California already generates more geothermal electricity than all of Iceland, and the industry in the United States is ripe for expansion. It's potentially a huge market for this upstart Icelandic company, thanks to new measures, such as renewable energy standards set by states, to encourage development of clean, renewable energy.

Margeirsson says the company is already making some big investments in California — and elsewhere.

"We do operate a district heating system in China, for example," he says. "And I like telling the story about that, because what we did is that we drilled a couple of wells, we started to pump up hot water, we diverted it through pipes into homes and we abandoned and tore down two coal-fired heating stations."

That's a tantalizing taste of what geothermal could do around the globe. According to one estimate, it could ultimately provide 10 percent of the United States' electricity. Margeirsson says people just need to take the risk, the way his country did a few decades ago.