Accessibility links
Election Monitors Question Putin's Victory European election monitors say Sunday's victory by the party of Russia's President Vladimir Putin was unfair. The vote, in which Putin's United Russia party swept 70 percent of the seats in the new legislature, could pave the way for the Russian leader to assume the role of prime minister after he leaves office. 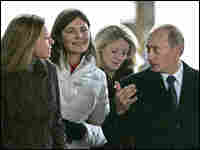 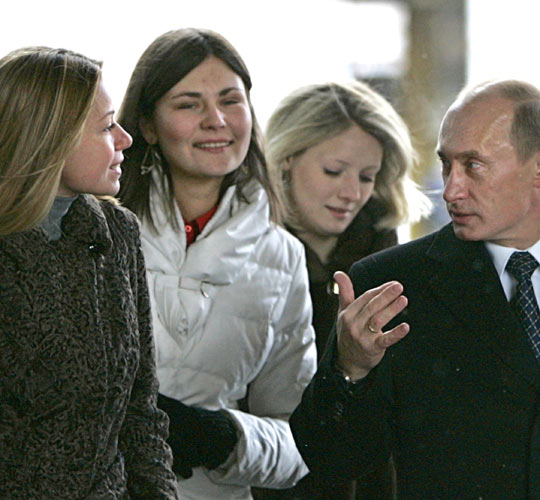 Russian President Vladimir Putin talks with voters at a polling station in Moscow on Sunday. 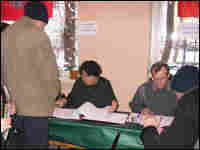 Russians register to vote in Sunday's elections at a ballot station in a central Moscow school. hide caption 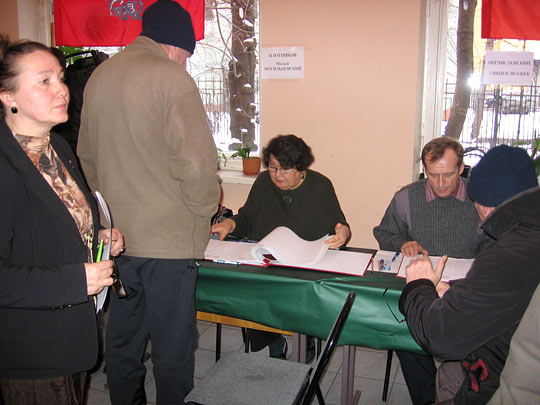 Russians register to vote in Sunday's elections at a ballot station in a central Moscow school.

European election monitors called into question a weekend victory by the party of Russia's President Vladimir Putin that would pave the way for him to remain the country's de facto leader even after he leaves office in the spring.

In the Sunday vote, Putin's United Russia party swept 70 percent of the seats in the new legislature following a tense Kremlin campaign that relied on a combination of persuasion and intimidation to ensure victory.

Luc van den Brande, who headed the delegation from the Parliamentary Assembly of the Council of Europe, said officials had brought the "overwhelming influence of the president's office and the president" to bear on the campaign, and that "administrative resources" had been used to influence the outcome.

Goran Lennmarker, president of the Organization for Security and Cooperation in Europe's parliamentary assembly, said it was "not a fair election."

Opposition groups also say they have documented systematic electoral fraud, including ballot-stuffing and testimony that the authorities forced state employees to vote for United Russia. Opposition leader and former chess champion Garry Kasparov accused the authorities of not only "rigging, but also raping the democratic system."

"People are telling horrible stories about the pressure from officials," Kasparov said. "Even in the hospitals, the patients (said) they would not be given medicine unless they (voted) for United Russia."

Washington has called on the Russian authorities to investigate allegations of vote fraud. But the elections commission chief has already said there were no serious violations.

A relatively high turnout of about 60 percent of voters braved snow and temperatures well below freezing to cast ballots. At a voting station in a central Moscow school, Elvira Kryuchkova said she voted for United Russia.

"What Putin has done for us is clear to see," she said. "Children are going to school, the elderly are getting their pensions, people are being paid. Life is nothing like it was before, when we waited in long lines and store shelves were empty."

High oil prices have made Russia's once bankrupt government — and a handful of Russians – very rich. But most people have been left behind. Retired aerospace engineer Maya Filin said she is barely getting by.

"Medicine is very expensive. I can't even afford to pay for a doctor's visit. I only survive because I have a plot of land outside Moscow where I can raise vegetables," she said.

Even so, Filin said she voted for United Russia because Putin is its top candidate. The president's term limit runs out next year, but supporters said his popularity gives him the "moral right" to hold onto power as the country's "national leader."

Putin himself has indicated that a major victory by United Russia could prompt him to take up the post of prime minister.

"The figures are amazing," he said. "We can now say Vladimir Putin is our national leader, that he's won the first round of voting in the presidential elections."

Preliminary election results give Putin's United Russia Party more than 60 percent of the vote. Lagging far behind is the Communist Party, with about 11 percent. The communists will be the only opposition force in parliament. The other two parties that look set to qualify are also pro-Kremlin.

The liberal Union of Right Forces Party, which did not qualify for seats, said it will contest the results in court. The party's top candidate, Boris Nemtsov, said the elections indicate the return of a one-party dictatorship to Russia.

"The authorities know that if they lose power, they'll end up in jail because they'll have to answer for their thieving and lying," he said. "They are cynical, unprincipled people. And they want to destroy us because we speak the truth."