Accessibility links
Climate Experts Mull Payment to Stop Deforestation Climate experts are trying to come up with new ways to cut emissions of greenhouse gases after the current international climate treaty expires in 2012. One proposal is to pay developing countries to stop cutting down trees. The experts are gathering in Bali, Indonesia.

Pande Beratha (right), dressed as a tree, takes part in an anti-deforestation campaign along with someone dressed as Hindu god Hanuman near the site of the Indonesian U.N. Climate Change Conference 2007 in Nusa Dua, Bali, on Monday. Jewel Samad/AFP/Getty hide caption

Pande Beratha (right), dressed as a tree, takes part in an anti-deforestation campaign along with someone dressed as Hindu god Hanuman near the site of the Indonesian U.N. Climate Change Conference 2007 in Nusa Dua, Bali, on Monday.

Read about the conference 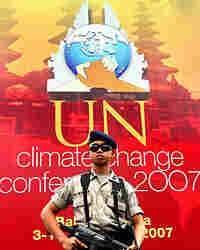 Thousands of experts gathered Monday in Bali, Indonesia, for two weeks of talks about climate change.

The current international treaty on climate, the Kyoto Protocol, expires in 2012, and the meeting is supposed to come up with new ways to curb global warming.

One idea is to pay developing countries to stop cutting down their forests. When trees burn or decompose, they send carbon up into the atmosphere and that warms the planet. Negotiators in Bali will be pressing hard for a scheme they call "reduced deforestation."

The idea of paying poor countries not to cut down their forests didn't make it into the 1997 Kyoto Protocol. Critics said rich countries shouldn't be able to buy "carbon indulgences" from poor countries.

But now there's a carbon market. Companies that need to cut their emissions can buy the right to pollute by subsidizing things like wind turbines or methane traps at pig farms. But they can't buy trees.

Countries with forests want to change that. People like Tasso Azevedo, head of Brazil's forest service.

"Large companies that need large quantities of carbon offsets to neutralize their emissions, they don't have many options today for large quantities. So, this will be an interesting opportunity," Azevedo said.

Interesting to the tune of billions of dollars for Brazil. That's how much tracts of Amazon forest could be worth in the carbon market.

Another group looking to get trees into the carbon market is the Coalition for Rainforest Nations. It's run by Kevin Conrad. He's from Papua New Guinea, and he went to Washington, D.C., recently to support reduced deforestation, but he warned it won't come cheaply.

"We have to keep in mind the forests are ours, and they are sovereign assets, and they are deriving a lot of revenue for our communities today," Conrad said. "And we are not going to put them in a museum for everyone, unless we understand the revenue streams are going to be sufficient and sustainable and predictable, and we can grow our economies."

Predictability is also what the potential buyers of these forest offsets want, though it may be another kind of predictability.

Pacific Gas and Electric Company, a major U.S. utility, is interested in the idea of carbon offsets for forests. But Nancy McFadden, senior vice president for PG&E public affairs, said those forests would have to stay saved.

Critics of dollars-for-forests said that may be hard to do. If someone gets carbon credits for saving one patch of forest only to push timber companies to another patch, the atmosphere won't improve.

And how long does a forest have to be saved to earn carbon credits? And what happens if a corrupt local official breaks out the chainsaws?

The U.S. government has been cool to the idea of reduced deforestation. But Indonesia, with some of the biggest tropical forests on the planet, appears to like it, said climate analyst Annie Petsonk of Environmental Defense.

"They may steal a march on the United States by taking a lead and saying, 'We're willing to go forward with programs to cap and cut our greenhouse emissions from deforestation if you in the industrialized world open your carbon markets,'" she said.

Getting forests into a new carbon market may get a big boost at Bali in part because everything else on the table is so controversial — for example, getting the U.S., China and India to join in any new climate deal.

So, negotiators may grease the skids for the forest scheme, so they'll have something to show for their two weeks in Bali. 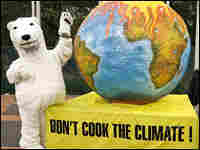 In this photo released by Greenpeace, an activist in polar bear costume unveils Greenpeace's giant thermometer with the message "Don't Cook The Climate!" at the opening of U.N. Climate Change Conference in Bali, Indonesia, Dec. 3, 2007. Ardliles Rante/AP Photo/Greenpeace hide caption 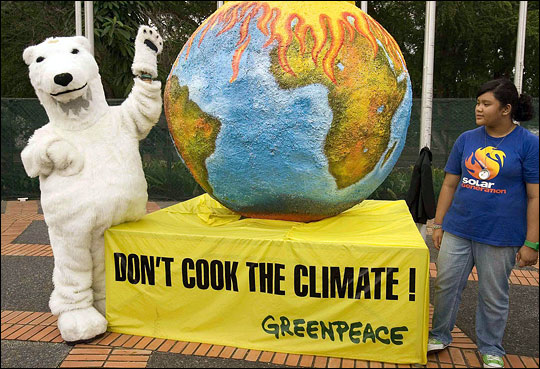 In this photo released by Greenpeace, an activist in polar bear costume unveils Greenpeace's giant thermometer with the message "Don't Cook The Climate!" at the opening of U.N. Climate Change Conference in Bali, Indonesia, Dec. 3, 2007.

The American delegation to a United Nations conference on climate control tried Monday to defend its reluctance to commit to global policies on climate change, describing instead the ways it is countering global warming.

A key goal of the two-week conference, which opened with delegates from nearly 190 countries in attendance, will be to draw a skeptical United States into an agreement to cut emissions of carbon dioxide and other so-called greenhouse gases.

While the U.S. delegation says it doesn't want to be an obstacle to a new agreement, Washington remains opposed to steps many other countries support, such as mandatory emissions cuts by rich nations and a target for limiting the rise in global temperatures.

"We're not here to be a roadblock," insisted Harlan L. Watson, the senior U.S. climate negotiator. "We're committed to a successful conclusion, and we're going to work very constructively to make that happen."

But the American position suffered a blow Monday when Australia's new Prime Minister Kevin Rudd signed papers to ratify the Kyoto Protocol climate pact. Delegates in Bali erupted in applause when Australia's delegate, Howard Bamsey, told the plenary that Canberra was jumping on board.

The move leaves the U.S. — the world's biggest emitter of greenhouse gases — as the sole industrial power which does not endorse the Kyoto Protocol.

Scientists say rising temperatures could lead to rising ocean levels, which would in turn swamp coastal areas and islands, wipe out species, create economic havoc and amplify the impact of natural disasters such as storms, fires and droughts.

"The eyes of the world are upon you. There is a huge responsibility for Bali to deliver," said Yvo de Boer, the executive secretary of the conference. "The world now expects a quantum leap forward."

The Bali meeting will be the first major conference of its kind since former Vice President Al Gore and a U.N. scientific council were awarded the Nobel Peace Prize in October for their environmental work. Gore is expected to arrive in Bali next week.

The immediate aim of the conference is to launch negotiations toward a pact to replace the Kyoto Protocol when it expires in 2012, set an agenda for further talks and a deadline for action. The U.N. says such an agreement should be concluded by 2009 in order to have a system in place in time.

Contentious issues lie ahead: Should emission cuts be mandatory or voluntary? To what extent will up-and-coming economies such as China and India be asked to rein in their skyrocketing emissions? How will the world's poorest countries be helped in adapting to climate change?

Over the past year, the Bush administration has signaled a willingness to play a larger role in the negotiations. U.N. officials agree they must craft a post-Kyoto framework that wins Washington's approval.