Accessibility links
VHS or Beta Mixes Genres, Defies Expectations Kentucky's VHS or Beta has evolved from French disco to an '80s-style rock-revival sound. Hear the band perform acoustic versions of songs from its recent Bring on the Comets. Singer Craig Pfunder also relates his experiences as an Asian-American rock singer.

Listen: Live NPR performance of "Bring on the Comets." 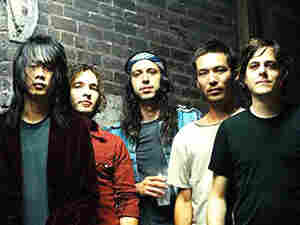 "I think we were kids just wanting to play music," singer Criag Pfunder says about forming the 10-year-old band VHS or Beta. The group is touring North America to promote its latest album, Bring on the Comets. VHS or Beta members Mike McGill and Pfunder recently performed in NPR's Studio 4A.

VHS or Beta's name (chosen by bass player Mark Palgy) offers little insight into its sound or story. Pfunder was born in Seoul, Korea. Other members hail from regions all across the U.S. But Louisville, Ky., is home to the group that first surprised fans with Les Funk, a CD of French house music.

"Our timing has been oddly off," Pfunder says. "We stopped caring about what people expect from us or about what we should expect our records to sound like."

It can be hard to get a satisfying answer when asking the group what types of music it plays. Largely, it depends on the album in question. In 10 years of making music, VHS or Beta has churned out dance music, indie-rock and an eclectic array of other sounds.

The group is not a fan of being boxed into one genre: "It's the last thing I think about when writing music," Pfunder says. "If you listen to Sam Cooke, you wouldn't think he was a black guy immediately, I don't think."