Accessibility links
In 'Fuerzabruta,' the Audience Gets In on the Act New off-Broadway show puts patrons at the center of the action — which involves flying actors, shattered walls, and a see-through pool suspended inches above the audiences' heads.

Listen
In 'Fuerzabruta,' the Audience Gets In on the Act 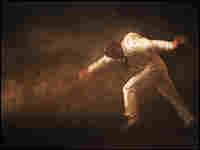 Flight risk: Performers take to the air in the Cirque du Soleil-style Fuerzabruta, the latest from the creator of the hit De La Guarda. hide caption 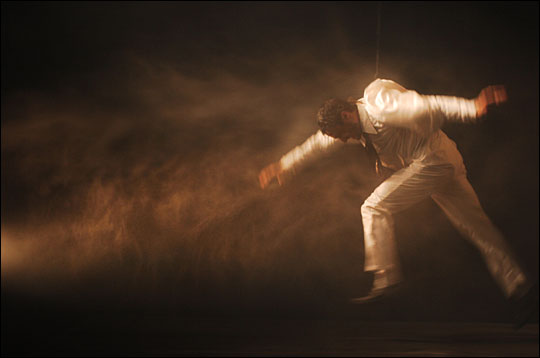 Flight risk: Performers take to the air in the Cirque du Soleil-style Fuerzabruta, the latest from the creator of the hit De La Guarda. 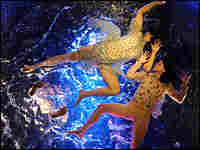 Soaking in it: An elevated, clear-bottomed pool serves as a stage for part of the show's action. hide caption 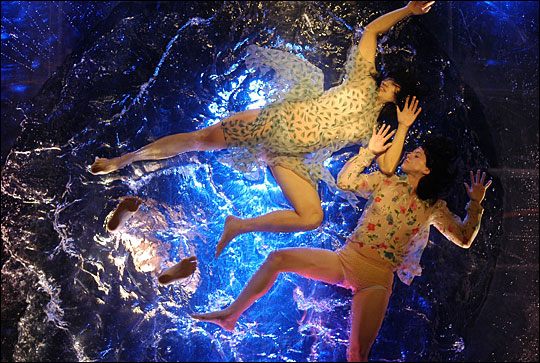 Soaking in it: An elevated, clear-bottomed pool serves as a stage for part of the show's action. 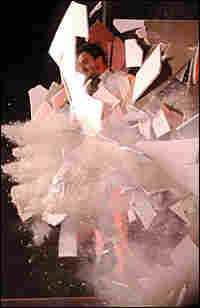 Tech boom: The high-energy production makes a mess of the theater, with cardboard and Styrofoam scattered throughout the performance space by evening's end. hide caption 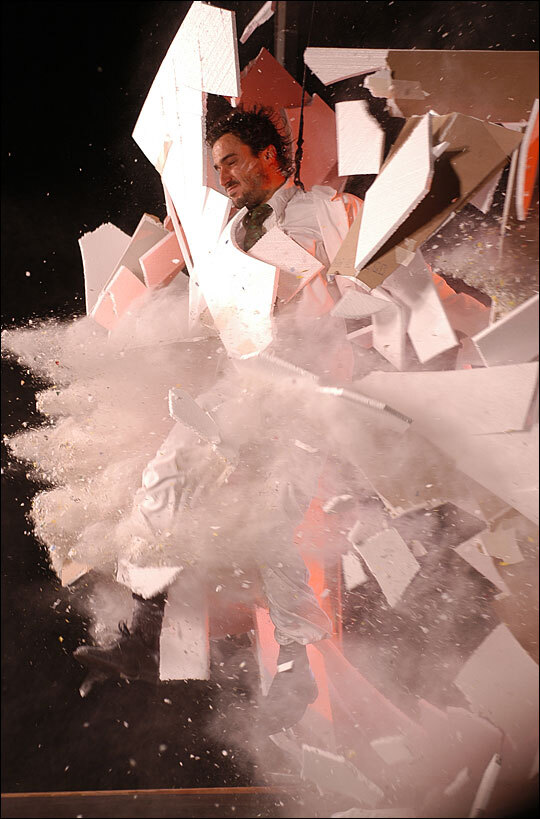 Tech boom: The high-energy production makes a mess of the theater, with cardboard and Styrofoam scattered throughout the performance space by evening's end.

The new off-Broadway show Fuerzabruta asks a lot of its audience, which is required to stand — and encouraged to move around the theater — over the course of a kinetic hour-long performance.

The show asks a lot from its acrobatic cast members, too. Hallie Bulleit, one of the dozen performers in Fuerzabruta, says there are two basic qualities all of them share.

"You can't have vertigo," she laughs. "And you must like water!"

The same is true for the audience, because Fuerzabruta is a 360-degree experience — a dizzying whirlwind of energy that takes place around and above the audience. It's kind of like being inside a Cirque du Soleil show; there's no comfortable seat to watch the action, because you're right in the middle of it.

And you're expected to participate.

Fuerzabruta translates from Spanish as "brute force," and Bulleit says she and the other performers definitely feel it. They get hit by walls; they hang precariously from moving set pieces.

"I like to say that the set is really the star of this show, and that all the cast members, basically, just spend an hour just trying not to be flung from it," Bulleit says.

Fuerzabruta is the brainchild of Argentine theater artist Diqui James, who created the long-running off-Broadway show De La Guarda. That show made great use of aerial acrobatics — members of the audience flew up to the rafters with the cast. Bulleit, who was also in De La Guarda, says James came up with some similarly gasp-inducing ideas for Fuerzabruta, which is playing in the same space.

"He thinks, 'Well, what would happen if we put a 50-foot pool with a clear bottom in the air over the audience's head?'" Bulleit says, midway through a backstage tour. "'How would that work? And what sort of things could we do, in that kind of a pool?'"

She's only too happy to demonstrate the answers, it turns out. As technicians pour water into the pool, we ride a cherry picker high above the theater floor. Bulleit steps onto the Mylar surface — and slides, shrieking and splashing, all the way to the other side.

"It's like an enormous Slip 'n Slide in the air," she says. "We like to jump really, really high and then just smack ourselves down on it, WWF-style. You can do it on your back."

And it's not just the audience looking up at the cast; it's the cast looking down at them. The pool, Bulleit explains, gets lowered, lowered, lowered, until it's suspended just above the audience's heads. If they reach up — and many do — they can touch their hands to the performers' hands, with just the thinnest layer of Mylar in between.

"It's a very intimate moment," Bulleit says. "You find those people that want to interact with you, and you're making your way across the Mylar and you see those eyes that just connect with yours."

The pool is only one part of Fuerzabruta; the performers fly over the audience, then mingle and dance with them. It's a rich sensory experience. But if you're looking for a plot, Bulleit says you're in the wrong place.

"Diqui is the creator, and he is insistent that there is no story that we're trying to tell."

But there is a kind of a progression: When the show starts, the theater is a pristine black box. By the time it's finished, it's completely trashed; there's Styrofoam and cardboard and water everywhere. The cast is drenched in perspiration. And so is the audience.

"It's exhausting," Bulleit says, "but in a great way, in a very cathartic way."

As long as you don't have vertigo — and you like water.