Accessibility links
In the Moment with The Waterboys More than 30 musicians have joined The Waterboys at one time or another, and the Irish band's style has varied from majestic rock to Celtic folk to the more experimental and contemporary rock of recent years. Hear leader Mike Scott and the band in an interview and performance.

Hear an interview and performance from KEXP

In the Moment with The Waterboys

In the Moment with The Waterboys

Hear an interview and performance from KEXP

View More Photos from This Session

'She Tried to Hold Me' 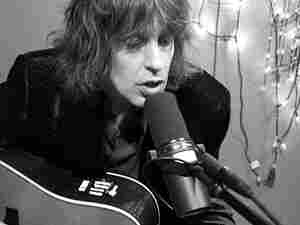 Mike Scott and The Waterboys have always been deeply emotional, soulful and spiritual, and they've made music that I've consistently connected with on a personal level. When I saw that they were coming to Seattle in November, I made it a priority to try to get them to KEXP for a live performance. We didn't know it was going to happen until the day they came in, and we didn't know if it would be Mike Scott solo or a stripped-down band, so it was an incredible surprise to have a full band of seasoned professionals on hand.

Joining Scott in the studio were all members of the current lineup: Richard Naiff on keyboards, Steve Wickham on fiddle, Mark Smith on bass and Damon Wilson on drums. One thing that really struck me about the performance was how in-the-moment they all were and how much joy they felt making music together. When they started playing, they each closed their eyes and were completely transformed. Hopefully, you'll be transformed listening to their performance, which includes three songs from the new album (Book of Lightening) and a vintage track from the past, "The Raggle Taggle Gypsy."

The interview with Mike Scott was equally entrancing, as he generously discussed moments from The Waterboys' past, the current state of the band, Prince, and his experiences on retreat at Findhorn. It was clear that his enthusiasm for songwriting hasn't diminished over the last 20 years as he continues to explore new sounds.

More About The Waterboys

Mike Scott is the sole founding member of The Waterboys, which originally formed in 1983 and has since released nine studio albums and one live disc. More than 30 musicians have joined The Waterboys' roster at one time or another, and the band's style has varied between the early, majestic sounds of A Pagan Place, the Celtic folk influence of Fisherman's Blues, and the band's current sound, which Scott calls "sonic rock." With the combination of two older members (Naiff and Wickham) and two newer members (Smith and Wilson), The Waterboys' current lineup brings together all of those sounds on the recent Book of Lightening.