Accessibility links
Iran Sparks Fireworks at Democratic Debate Democratic presidential candidates clashed over Iran and called for a tougher stance on China in a radio debate in Iowa Tuesday, broadcast by NPR and Iowa Public Radio. The forum comes just one month before the Iowa caucuses, as polls show a tight three-way race. 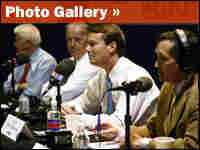 As Democratic presidential candidates debated at a forum Tuesday sponsored by NPR and Iowa Public Radio, they sometimes raised more questions than they answered. NPR reporters provide a reality check.

After the broadcast portion of the debate concluded, the candidates were asked one more question on the economy. Read and hear that conversation.

Clinton: 'No Basis for a Rush to War' with Iran

Obama: White House 'Should Have Stopped the Saber-Rattling' at Iran

Dodd: 'This Is an Adversarial Relationship' with China

Edwards and Dodd on Not Buying Christmas Toys from China

Clinton: 'Not Realistic' to Round Up all 12 Million Undocumented Immigrants 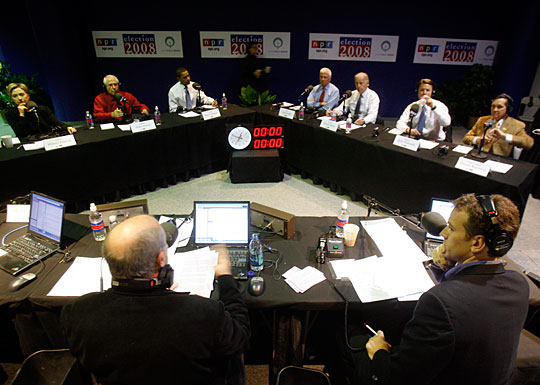 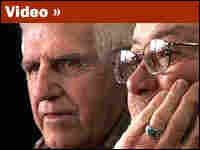 Democratic presidential candidates clashed over Iran, and tackled trade and immigration during a radio debate from Iowa on Tuesday. The forum, sponsored by NPR and Iowa Public Radio, comes just one month before the Iowa caucuses, at a time when polls show a tight three-way race among Sen. Barack Obama (IL), Sen. Hillary Clinton (NY) and former Sen. John Edwards (NC).

The candidates were asked about a new National Intelligence Estimate that concludes Iran stopped work on its nuclear weapons program in 2003. The new report reverses the conclusion of two years ago that Iran was actively working on a nuclear weapon.

Clinton said she is relieved by the intelligence findings, and called on President Bush to pursue diplomacy with Iran.

Clinton has come under criticism from fellow Democrats for her September vote in favor of a Senate Resolution calling the Iranian Revolutionary Guard a terrorist organization. Obama — who skipped the vote while campaigning in New Hampshire — has said it gave President Bush a "blank check" to go to war against Iran. President Bush warned in October that a nuclear-armed Iran could trigger "World War III."

Edwards said Tuesday that the Senate had a responsibility to stand up to President Bush. "It's absolutely clear — and eerily similar to what we saw with Iraq, where they were headed," he said. Edwards noted that Clinton is the only Democratic presidential candidate who voted in favor of the resolution.

Sen. Christopher Dodd (CT) chimed in, saying the resolution, which he voted against, eliminated all options except a military one.

Clinton defended her vote, saying it was non-binding and did not authorize Bush to take any action against Iran. "I think we do know that pressure on Iran does have an effect," Clinton said.

Sen. Joe Biden (DE) challenged the idea that the Senate vote influenced Iran's nuclear plans. "With all due respect to anybody who thinks that pressure brought this about, let's get this straight. In 2003, they stopped their program," Biden said.

Rep. Dennis Kucinich (OH) said the new intelligence assessment confirms his earlier skepticism. "Just as five years ago, I warned that there was no evidence that would merit war against Iraq and warned this country not to do it, so for the past few years I've been saying that there's no evidence that Iran had a nuclear weapons program."

Kucinich complained that some of his fellow Democrats — Clinton, Obama and Edwards — still say "all options are on the table" when it comes to Iran.

The format of the debate was designed to encourage in-depth discussion of a handful of topics, including China and immigration. The candidates agreed that the federal government had failed to do enough to stop illegal immigration. But they said priests and doctors who assist undocumented immigrants should not be penalized.

"The point is, we're not going to deputize a whole bunch of American citizens to start grabbing people or turning them in," Obama said. He called for a crackdown on employers who hire illegal immigrants, but added there should be a pathway for immigrants to achieve legal status.

Clinton agreed on the need for tougher enforcement against employers, while voicing some sympathy for the immigrants themselves.

"What we're looking at here is 12 to 14 million people," Clinton said. "They live in our neighborhoods, they take care of our elderly parents. They probably made the beds in some of the hotels we stayed in last night." She added that immigration was not a big concern when the U.S. economy was producing more jobs.

Clinton said new immigrants should be encouraged to learn English, but she rejected a listener's complaint about government telephone lines with a "Push 1 for Spanish" option. She pointed to the wide range of languages spoken in New York.

"The city would be in total chaos if people didn't get some services and some help in a language they understood," Clinton said.

Dodd warned that Republicans would use immigration as a wedge issue. Former Sen. Mike Gravel (AK) said the immigration debate was making a "mountain out of a molehill."

Trade has also become a major concern for American voters, even in Iowa, which enjoys a large trade surplus with the rest of the world. Many Democrats are skeptical that globalization is good for the U.S. economy. Several of the candidates said the government should take a tougher line against China.

"We have not been the best negotiators, and often times, we're negotiating on behalf of Wall Street instead of Main Street," Obama said.

Edwards echoed that view, saying big corporations are driving American policy toward China. "They get their way and the American people lose," he said.

Clinton responded to a mother's question about dangerous toys from China, saying the Bush administration has "essentially defanged the Consumer Product Safety Commission."

Edwards and Dodd, who both have young children, vowed not to buy any Chinese-made toys this Christmas. "My toys are coming from Iowa," Dodd joked.

Tuesday's two-hour debate comes at a critical time in Iowa. With just 30 days before the first-in-the-nation caucuses, polls show a tight race, with Obama, Clinton and Edwards in a virtual tie. More than half the Iowa voters surveyed by The Des Moines Register still say they might switch their allegiance when the caucuses are actually held.

Clinton still holds a lead in national polls, so rivals see Iowa as the best opportunity to slow her momentum. Obama, who has been gaining in Iowa polls, could get a boost later this week when he campaigns to sellout crowds alongside celebrity endorser Oprah Winfrey. Obama is also outspending Clinton on Iowa TV ads.

All of the Democratic presidential candidates took part in Tuesday's debate except New Mexico Gov. Bill Richardson, who was attending the funeral of a Korean war casualty whose remains he helped to repatriate.

Republican candidates are not as single-minded about Iowa as the Democrats are, but a close race is shaping up there as well. The Des Moines Register poll found former Arkansas Gov. Mike Huckabee edging ahead of longtime Iowa front-runner Mitt Romney, the former governor of Massachusetts. Romney, in a possible nod to Iowa's large evangelical community, plans a major speech on Thursday to discuss his own Mormon faith.

NPR and Iowa Public Radio planned to host a Republican debate this week, but the leading Republicans declined, citing scheduling conflicts. NPR is now working with the various campaigns to identify a suitable date and location.