Accessibility links
Democratic Rivals Drift Toward Kucinich's Views On issue after issue, says Richard Wolffe of Newsweek, Kucinich's ideas have gone from outlying to mainstream. NPR's Democratic debate on Tuesday gave the darkest of dark horses a chance to shine. 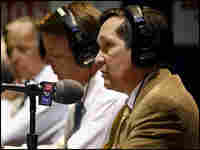 Kucinich notions that once seemed crazy to the Democratic Party ended up front and center Tuesday, Wolffe says, and NPR's debate format gave the Ohio congressman a chance to shine. Kucinich is generally considered among the darkest of dark horses in the race. Yesterday, he spoke out about his opposition to liberalized trade with China and to the war in Iraq.

"We're borrowing money from China to finance the war in Iraq," Kucinich argued.

Wolffe says the idea of a Kucinich administration makes no sense to him, but he can't help noticing a new vogue for Kucinich's opinions.

"Think what you like about Kucinich and UFOs, but this Democratic field has essentially moved to the Kucinich position on trade, on Iraq, on a whole range of things where people thought he was a real outlier," he says. "They're all pretty much in agreement now, when it comes to some of these big issues like trade, like diplomacy and war. And they are where Dennis Kucinich is."

On our blog, an open thread on the gravitational force of Kucinich.