A special Hannukah set from the duo Good for the Jews.

And that is it for this edition of THE BRYANT PARK PROJECT for this December 5th, 2007.

And today we say goodbye to beloved producer Ilya Marritz. He came to us by way of ALL THINGS CONSIDERED, and…

BURBANK: …suddenly, come on in here, Il-man(ph). He came to us by way of ALL THINGS CONSIDERED in WNYC Public Radio.

BURBANK: I think I speak for everyone here at the BPP when I say, we are so screwed tomorrow.

BURBANK: Bye-bye, Ilya. Use some of your free time to buy a GD television.

STEWART: Us Weekly. He's not going to say anything.

We'll miss you, Ilya. Thank you.

Thanks, everybody, for listening.

Rockin' Around the Dreidel

Rockin' Around the Dreidel 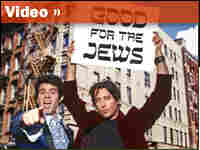 Good for the Jews play live from their Hannukah set. Courtesy of Good for Jews hide caption

This week, as Christians are dragging home Christmas trees, Jews around the world are celebrating the eight nights of Hannukah.

The musical duo Good for the Jews are taking their tradition's answer to the Christmas carol on their "Putting the Ha! in Hannukah" tour. Rob Tannenbaum and David Fagin reveal how they got their start.

"People talk about the war on Christmas," says Tannenbaum. "There's no such thing as a war on Christmas. You could sooner kill President Bush behind his desk than you could fight a war on Christmas." Feeling marginalized one December, he wrote a song poking fun at Christians for drinking too much on their holiday — and arguing that his holiday was better.

Tannenbaum and Fagin give us a taste of the set they'll be bringing to 13 cities.