Accessibility links
NIE Report May Block Military Force Against Iran The latest intelligence report on Iran seems to be an obstacle to policies of President Bush. The report's main conclusion that Iran ceased a nuclear weapons program in 2003 may raise barriers to the possibility of using military force against Iran and questions economic sanctions. 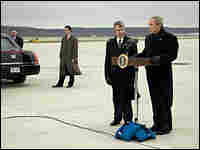 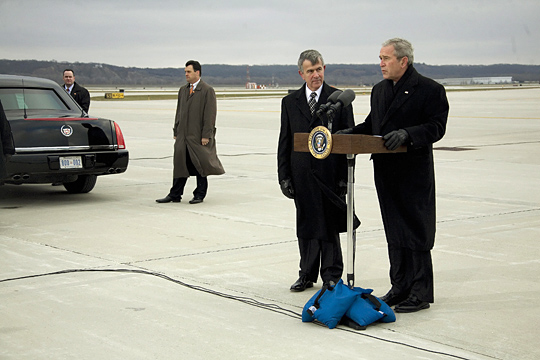 President Bush, at Eppley Airfeild in Omaha, Neb., with former Agricultural Secretary Mike Johanns Wednesday, said that except for China, U.S. allies see Iran's nuclear program as "a problem" and demanded that Tehran "come clean" on past atomic activities. 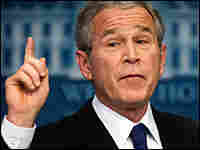 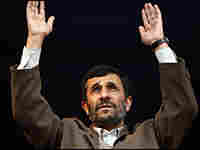 Iranian President Mahmoud Ahmadinejad speaks at a rally in Iran on Tuesday. He said the NIE report was a victory for his country's nuclear program. AFP/Getty hide caption

The emergence of the new National Intelligence Estimate on Iran is presenting a major challenge to the policies of the Bush administration.

The report's primary conclusion — that Iran halted a secret nuclear weapons program four years ago — appears to raise barriers to the use of military force against Iran and raise questions about whether economic sanctions are even justified.

President Bush said he is sticking with his approach of sanctions and international pressure.

At Tuesday's news conference at the White House, the president emphasized that the National Intelligence Estimate said Iran had a covert nuclear weapons program in the past.

"Iran was dangerous; Iran is dangerous; and Iran will be dangerous if they have the knowledge necessary to make a nuclear weapon," he said.

As justification for continuing his Iran policy, the president cited the NIE's judgment that Iran chose to shut down its covert nuclear program in 2003 because of international pressure. The president said he wants that pressure to continue.

But in 2003, there were no economic sanctions against Iran. The U.S. refused to engage with Iran and dismissed the European decision to negotiate as fruitless.

In fact, the only pressure the U.S. had brought against Iran was its invasion of Iraq, said Farideh Farhi, an expert on Iran at the University of Hawaii.

"If we take the NIE seriously — take 2003 as the period that caused the change — then it was the fear of military action that actually promoted or caused Iran to do something about its nuclear program."

It was two years later that the Bush administration decided to back the European negotiations and only a year ago that the U.N. Security Council passed the first of two mild sanctions resolutions against Iran.

Recently, the administration has been talking about even tougher sanctions, all the while suggesting the possibility of military attack.

But the first casualty of the NIE's conclusions appears to be the military option. Many experts think it is impossible now. Bruce Riedel, who spent 30 years in the CIA, is among them. Riedel is a scholar with the Saban Center for Middle East Policy at the Brookings Institution.

"There is no possible way that the United States could now use unilateral military force in the wake of this estimate. I don't think the political calculus in this country or that of our allies abroad would tolerate it," he said.

"Quite clearly it has made it much harder, number one, for the administration to line up the Russians and the Chinese and others for additional multilateral sanctions against Iran. And, number two, that option we kept hearing about being on the table — military action — would appear to be off the table for the time being."

These policy options may not be the only casualties of the NIE. Iran has argued for a year that the U.N. Security Council sanctions against it are unjustified and illegal. The NIE is likely to give the Iranian argument greater credibility, Riedel said.

"Countries like Russia and China are going to point to the judgment in this estimate and say, '"Look, the Americans don't believe they have an active nuclear weapons program. Why do we need to sanction Iran?'"

On Tuesday at the U.N., Chinese Ambassador Wang Guangya hinted that Beijing may already be rethinking its support for sanctions.

"This is an important report, and certainly I think we will study the content and also think about the implications for the council action here," he said. "We all start from the presumption that now things have changed."

Any effort to lift sanctions against Iran could be blocked by the United States, which holds a veto in the Security Council.

Key Players in the Debate 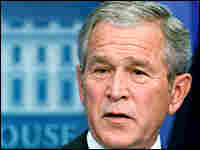 Bush on Iran and Israel 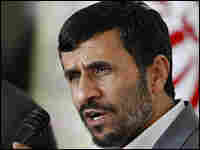 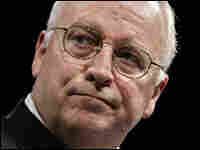 Vice President Dick Cheney has strongly rejected the idea of allowing Iran to have a nuclear program. hide caption 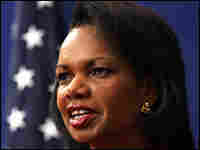 U.S. Secretary of State Condoleezza Rice said the United States would not support Mohammed ElBaradei as head of the International Atomic Energy Agency for a third term unless he took a harder line against Iran's nuclear program. David Silverman/AFP/Getty Images hide caption 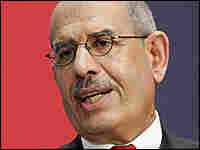 Mohammed ElBaradei, head of the IAEA, called for a "timeout" on Iran in January 2007. Sean Gallup/Getty Images hide caption

Mohammed ElBaradei on the need to avoid escalation

The controversy over Iran's nuclear program is complicated by the country's decision to resume efforts to enrich uranium — defying the United Nations despite saying it had stopped researching nuclear weapons.

Iranian officials said they wanted the enriched radioactive material as fuel for peaceful nuclear reactors. When President Bush and other administration officials accused Iran of seeking to develop a nuclear bomb, they often referred to Iran's uranium-enrichment program as proof.

Here's a timeline highlighting what was said and known about the program since early 2003:

May 2003: Iranian President Mohammed Khatami offers to talk to the United States about the countries' differences. But the Bush administration rejects the offer. In part because of this refusal, the Europeans act on their own to negotiate with the Iranians while trying to persuade the Bush administration to join the negotiation process.

November 2003: The IAEA announces that Iran has been violating its safeguards agreement under the Nuclear Non-Proliferation Treaty. It accuses Tehran of failing to report that it was handling nuclear material and building facilities to process it. It says Iranian officials hid key parts of their nuclear program for nearly 20 years. The latest National Intelligence Estimate now says it believes "with high confidence" that the fall of 2003 was about the time Iran shut down a secret nuclear weapons program.

December 2003: After talks with the European Union, Tehran agrees to allow IAEA inspectors to expand their operations in Iran, by questioning its scientists and officials, reviewing documents and conducting further examinations of some of its nuclear research and development facilities.

November 2004: Iran promises negotiators from the EU that it will suspend all its activities for processing nuclear fuel. Although Iran continues to deny that its activities have any military purpose, President Bush calls it a "nuclear weapons program" and chides Iran's leaders for suspending it, rather than ending it entirely. "Our position is that they ought to terminate their nuclear weapons program," Bush says.

February 2005: President Bush accuses Iran of being "the world's primary state sponsor of terror, pursuing nuclear weapons, while depriving its people of the freedom they seek and deserve."

June 2005: Secretary of State Condoleezza Rice says the United States will not support a third term for Mohammed ElBaradei as head of the IAEA unless he takes a harder line against Iran's nuclear program.

April 2006: Iranian President Mahmoud Ahmadinejad says Iranian scientists have successfully enriched uranium to the 3.5 percent level, pure enough to run a nuclear reactor. He says, "I am officially announcing that Iran has joined the group of those countries which have nuclear technology." Uranium for a nuclear bomb would require around 90 percent enrichment.

December 2006: The U.N. Security Council unanimously imposes sanctions on Iran for failure to halt its uranium enrichment program. It bans U.N. member states from providing Iran with equipment or technology that could be used in its nuclear program.

January 2007: IAEA head Mohammed ElBaradei calls for a "timeout" on the issue of Iran's nuclear program, saying the United Nations should suspend sanctions against Iran if Iran will freeze its nuclear program. He tells CNN, "The key to the Iranian issue is a direct engagement between Iran and the U.S., similar to North Korea."

Spring 2007: A National Intelligence Estimate on Iran was expected to be delivered to Congress during this period, but is repeatedly postponed as intelligence agencies re-assess information about Iran's nuclear program.

August 2007: President Bush says, "Iran's active pursuit of technology that could lead to nuclear weapons threatens to put a region already known for instability and violence under the shadow of a nuclear holocaust." The latest National Intelligence Estimate says, "we assess with moderate confidence Tehran had not restarted its nuclear weapons program as of mid-2007."

September 2007: U.S. intelligence officials, including CIA Director Michael Hayden, begin a reassessment of their information on Iran, according to unnamed officials quoted in the New York Times. The newspaper says White House officials knew at the time that the intelligence agencies were reviewing their conclusions, but did not know until later that those conclusions were drastically being changed.

October 2007: President Bush says, "we got a leader in Iran who has announced that he wants to destroy Israel. So I've told people that if you're interested in avoiding World War III, it seems like you ought to be interested in preventing them from having the knowledge necessary to make a nuclear weapon."

November 2007: A final draft of the National Intelligence Estimate is presented to President Bush and Vice President Dick Cheney. It concludes that Iran stopped its weapons program in late 2003 and since then has shown no signs of resuming it.

December 2007: A day after the NIE is made public, President Bush says he was first told by Director of Intelligence Michael McConnell in August that there was new intelligence about Iran's nuclear program, but that he wasn't told what that new intelligence was at the time. President Bush, in a press conference, says he still regards Iran as "dangerous." He asks reporters, "What's to say they couldn't start another covert nuclear weapons program?"