Accessibility links
Testing Toys for Lead Dozens of toys contaminated with lead have been recalled over the past year, so it's not a surprise that parents want to know whether their holiday toys are tainted. Sales of do-it-yourself lead test kits are up, but how effective are they? 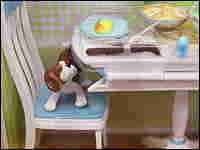 Sales of do-it-yourself lead-test kits are up this season. Dozens of toys contaminated with lead have been recalled over the past year, so it's not a surprise that parents want to know whether their holiday toys are tainted.

There are at least five home test kits on the market. One, called Abotex Lead Inspector, was developed by Dave Lachance.

He gives a demonstration of the product using a toy car he picked up from a dollar store. He dips a Q-tip-like swab into a small vial of clear solution, and then rubs it on the car.

"You'll do this for 30 seconds, and then you'll start to see a color develop when the lead reacts," Lachance says.

It can take up to 10 minutes for the color to turn if there's a low concentration of lead. But in Lachance's demonstration, the color began appearing pretty quickly.

"You can start to see it's turning to a very dark black color, indicating that this particular car has a high concentration of lead," he says.

The toy car carried no brand name, and other than a "Made in China" sticker, it wasn't labeled. Given the volume of recalls this year, Lachance says it's not a surprise at all to find lead in this toy.

Consumers Union ran tests to determine the accuracy of the lead-test kits. They approved three of five products tested. The Abotex Lead Inspector kit was among those approved. The product is sold via the company's Web site for $13.

Consumers Union's Don Mays says his testing turned up no false positive or false negatives with the kits they recommended. "These kits did a very good job of detecting lead."

Consumers Union, which publishes Consumer Reports, found the kits do not detect all lead in a product. For instance, the kits don't detect lead embedded below the surface.

"So it doesn't give you a complete answer," says Mays. "But it does give you some indication if there's a hazardous situation."

The concern with lead is hand-to-mouth activity that allows a child to swallow the toxic metal. So, Mays says, determining whether a toy has surface lead is significant. "If you get a positive result," says Mays, "you should take it away from a child."

The Consumer Product Safety Commission, the federal agency that issues product recalls, does not recommend consumer lead-test kits. The agency conducted an evaluation of some of the test kits in October. The CPSC didn't name which kits it tested, but the agency determined that they were unreliable.

Consumers Union discovered a Fisher-Price medical kit toy that tested positive for lead. In particular, the red blood-pressure cuff was the culprit. The company also makes the cuffs in two other colors.

Consumer Product Safety Commission spokeswoman Julie Vallese says her agency determined the Fisher-Price medical kit was not in violation of the law.

"There's not reason, cause, risk or exposure for the agency to act," says Vallese.

"When we find lead that is a serious risk, it's removed," says Vallese. "But just because it's there, doesn't mean your child's going to be sickened."

Fisher-Price says its medical kit with the red blood-pressure cuff meets all the requirements set forth in the federal regulations.

But some states are pushing for more restrictive measures. Earlier this week, the attorney general in Illinois warned consumers that the Fisher-Price product contains high levels of lead.

At the state's request, Fisher-Price agreed to remove the red blood-pressure cuffs from store shelves across the state of Illinois.