Accessibility links
Parents Seek Alternatives to Chinese Toys A wave of recalls for Chinese-made toys for lead and other health hazards has parents concerned this holiday season. A recent poll shows nearly half of consumers plan to avoid buying toys made in China this year. But the alternatives are often more expensive. 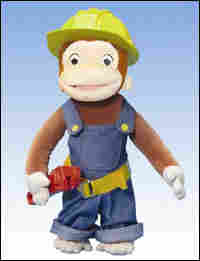 Recalls of millions of toys, most of them from China, for lead paint and other potential hazards are sending toymakers and retailers scrambling to remove potentially dangerous toys from the market and assure holiday shoppers.

Dozens of toys contaminated with lead have been recalled over the past year, so it's not a surprise that parents want to know whether their holiday toys are tainted. Sales of do-it-yourself lead test kits are up, but how effective are they?

A wave of recalls for Chinese-made toys because of lead and other health hazards has parents concerned this holiday season. A recent poll shows nearly half of consumers plan to avoid buying toys made in China this year. But the alternatives are often more expensive.

In Washington, D.C., Lisa Cannon was sorting through holiday gifts she recently brought home for her 2-year-old daughter. Some of the labels said they were made of nontoxic materials. All of the gifts were made in China.

She didn't necessarily want to buy toys made in China. She looked at Web sites that sold all-wood, European-made toys. A toy kitchen cost at least $200 to $300 "and frankly I just can't see spending that kind of money," she said.

While many parents won't or can't pay the extra cost of American or European-made toys, Amber Westland is determined to buy local.

She says she found a toymaker in Virginia "who makes amazing toys in his garage. They're not cheap, which is the price we pay for getting things in China, but I think it will be worth it."

Westland said the recalls have left her cynical.

"It makes me feel like I have to take a greater role in protecting my children and my family's children, because the government isn't doing what we just assumed they were doing," she said.

One industry analyst saud he expects toy sales to be down this year, but only by a percent or two. That could mean that most parents aren't that worried or that they trust that stores have removed the dangerous toys.

Ryan Beegan, who was shopping at a suburban Maryland Toys "R" Us, with his 2-year-old son, said he and his wife have been aware of the recalls.

"We've taken a proactive approach to just get a basic understanding of what toys have been recalled or affected, and we've made a mental note to make sure that we stay clear of those toys and at least to stay in front of the consumer reports," Beegan said.