Accessibility links
Finding Redemption Through Acceptance Working as an interrogator at Guantanamo Bay, Cuba, is a dangerous job. Yet an experience with a terrorism suspect led one veteran of the Iraq war to believe in the power of redemption and acceptance. 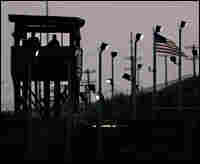 The author of this essay is a former interrogator at the Guantanamo Bay Naval Base in Cuba. She heard This I Believe while working at the prison at Guantanamo. She requested anonymity because of ongoing death threats against interrogators. Mark Wilson/Getty Images hide caption

I believe in the power of redemption.

I was an interrogator at the detention facility in Guantanamo Bay, Cuba. I don't have any torture stories to share. I think many people would be surprised at the civilized lifestyle I experienced in Guantanamo. The detainees I worked with were murderers and rapists. You never forgot for a moment that, given the chance, they'd kill you to get out. Some committed crimes so horrific that I lost sleep wondering what would happen if they were set free.

But that is not the only reason I could not sleep; I had spent 18 months in Iraq just before my arrival in Cuba. First I served as a soldier for a year, and then returned as a civilian contractor because I felt I hadn't done enough to make a difference the first time. After the Abu Ghraib scandal broke, I left because I felt I could not make any difference anymore. Those events simply undermined all of our work.

I felt defeated and frightened and tired, and I hoped I could redeem myself by making a difference in Guantanamo. Still, I couldn't sleep. I was plagued with dreams of explosions and screaming. After being sleepless for more than 48 hours, I began to hallucinate. I thought people were planting bombs outside my house in Guantanamo. That was the night my roommate brought me to the hospital.

When I returned to work, I began to meet again with my clients, which is what I chose to call my detainees. We were all exhausted. Many of them came back from a war having lost friends, too. I wondered how many of them still heard screaming at night like I did.

My job was to obtain information that would help keep U.S. soldiers safe. We'd meet, play dominoes, I'd bring chocolate and we'd talk a lot. There was one detainee, Mustafa, who joked that I was his favorite interrogator in the world, and I joked back that he was my favorite terrorist — and he was. He'd committed murders and did things we all wished he could take back. He asked me one day, suddenly serious, "You know everything about me, but still you do not hate me. Why?"

His question stopped me cold. I said "Everyone has done things in their past that they're not proud of. I know I have, but I also know God still expects me to love Him with all my heart, soul, mind and strength, and to love my neighbor as myself. That means you."

Mustafa started to cry. "That's what my God says, too," he said.

Accepting Mustafa helped me accept myself again. My clients may never know this, but my year with them helped me to finally heal. My nightmares stopped.

I don't know what kind of a difference I made to the mission in Guantanamo. But I found redemption in caring for my clients, and I believe it saved my life — or at least my sanity. People say, "Hate the sin, not the sinner." That is easier said than done, but I learned that there is true freedom in accepting others unconditionally.

Editor's note: The essayist's status and story were verified by document check and chain of command. Additionally, the mention of "murderers and rapists" referred to high-security prisoners the essayist dealt with who had prior convictions.