Accessibility links
Romance Amid the Sweep of History in 'Atonement' The film Atonement, based on the novel by Ian McEwan, is a rich, old-fashioned love story and a potent meditation on the power of fiction to destroy and create.

Listen
Romance Amid the Sweep of History in 'Atonement'

The film Atonement, based on the novel by Ian McEwan, is a rich, old-fashioned love story and a potent meditation on the power of fiction to destroy and create.

Ian McEwan took on the disasters of a great lie and a world war in his novel "Atonement." Now a new movie takes on the much acclaimed novel. It stars Keira Knightley and James McAvoy.

KENNETH TURAN: "Atonement" is an assured and deeply moving film. It's a rich, old-fashioned love story and a potent meditation on the power of fiction to destroy and create. Directed by Joe Wright and starring Keira Knightley, "Atonement" has the kind of expansive sweep that brings "The English Patient" to mind. Knightley stars as the wealthy Cecilia, one of England's bright young things, circa 1935. She's at Cambridge with Robbie, played by Peter McAvoy, the son of a family housekeeper who's there on a scholarship. There was real feeling between them, but it makes both of them nervous and uncertain.

Ms. KEIRA KNIGHTLEY (Actor): (As Cecilia Tallis) I don't know how I could have been so ignorant about myself. Am I stupid? You knew before I did.

Mr. JAMES McAVOY (Actor): (As Robbie Turner) Why are you crying?

TURAN: Then a pair of riveting incidents happen that are fatally misunderstood by Cecilia's younger sister.

Ms. SAOIRSE RONAN (Actor): (As Briony Tallis) I know who it was.

Unidentified Man: (As Character) You saw him then?

Unidentified Man: (As Character) You know it was him or you saw him?

Unidentified Man: (As Character) With your own eyes?

TURAN: Those accusations trigger a series of devastating situations that enmesh all the key characters and take decades to fully play out. Knightley and McAvoy not only have the looks for a sweeping love story, they have the skill to play the film's range of emotions. Plus, they have the will to throw themselves into the proceedings like they really mean it.

"Atonement" is a film of layers and surprises, and Wright's robust directing style, his ability to infuse vigorous emotions into his films, suits it to a T. And the director's decision to stick closely to the book is a key factor in the film's success. Like the best of titles, the full meaning of "Atonement" is only clear in its conclusion. You may think you know, but until you come to the end, you really don't. It's that kind of a novel, and thankfully that kind of a film. 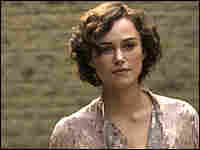 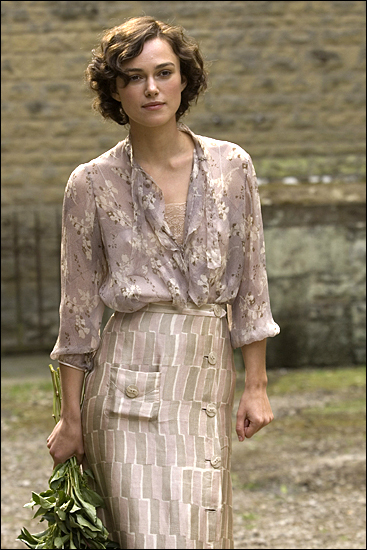 A little girl's spiteful lie and its terrible consequences are at the heart of this gorgeous, resonant adaptation of Ian McEwan's 2001 bestseller. A tale of heartbreak set in the 1930s and '40s, it chronicles events set in motion when 13-year-old Briony (a terrific Saoirse Ronan) sees something she thinks she understands, but actually doesn't. Her misinterpretation, born of a mix of naivete and class stereotyping, destroys two lives and profoundly warps a third.

The filmmakers swathe their story in the richly upholstered elegance of a stately English estate and steep it in the heady romance that's budding between Briony's sister Cecelia (Keira Knightley) and their housekeeper's son, Robbie (James McAvoy). Joe Wright (Pride and Prejudice) directs Atonement with an eye to framing each performance with spectacularly vivid images, including a genuinely breathtaking tracking shot on the bloody, wreckage-strewn beach at Dunkirk. (Recommended)