Accessibility links
Pioneering Composer Stockhausen Dies at 79 German composer Karlheinz Stockhausen died Wednesday after a short illness. From his outrageous compositions (such as the Quartet for strings and four helicopters) to his many lectures, Stockhausen was one of the most vibrant voices in avant-garde music.

Song of the Children (excerpt)

Stockhausen lectures on 'sound' in 1972. 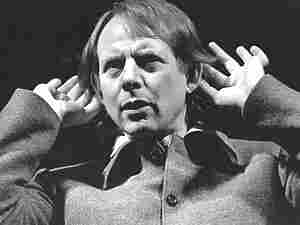 German composer Karlheinz Stockhausen has died at age 79, at his home near Cologne, Germany. He died Wednesday after a short illness, according to his music foundation.

From his outrageous compositions — such as the Quartet for strings and four helicopters — to his many lectures, Stockhausen was one of the most vibrant voices in avant-garde music.

Orphaned during WWII, Stockhausen made a living by working odd jobs while teaching himself to play a variety of instruments. He studied piano and composition at the State School for Music in Cologne, and later traveled to Paris to study with Olivier Messiaen.

Stockhausen lectured on music throughout the world, making a tour of American universities in 1958. Later, he held a post of visiting professor at the University of California-Davis.

Stockhausen's visionary approach to music took him in many directions, beginning in the 1950s with experiments in electronic music. Gesang der Junglinge, from this period, was a groundbreaking piece that critic Alex Ross describes as an "electronic classic, a cauldron of sound centered on a choirboy singing 'Praise the Lord,' setting a standard for far-out music that no psychedelic rock band has surpassed."

Stockhausen gradually moved toward large theatrical compositions. In Japan in 1970, he supervised performances that spanned 183 days, including 20 soloists and lantern projections.

In 1977, he began the monumental music drama Light, which unfolded in extremely long sections based on the seven days of the week. One section, from the "Wednesday" portion, is scored for string quartet, four helicopters and four video cameras.

Stockhausen surpassed even himself in controversy in 2001, when he labeled the Sept. 11 attacks as "the greatest work of art one can imagine." He later apologized for his comments.

Stockhausen's musical innovations expanded far beyond the classical avant-garde, with musicians such as Miles Davis and Frank Zappa claiming him as an influence.