Listen
Monastery of the Angels in Los Angeles

NPR's Scott Simon visits the Monastery of the Angels in Hollywood, where 22 cloistered nuns live. We talk to sister Mary Dominic about her life and faith. 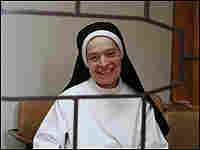 Sister Mary Dominic is one of 22 cloisered nuns living at the Monastery of the Angels. Peter Breslow, NPR hide caption 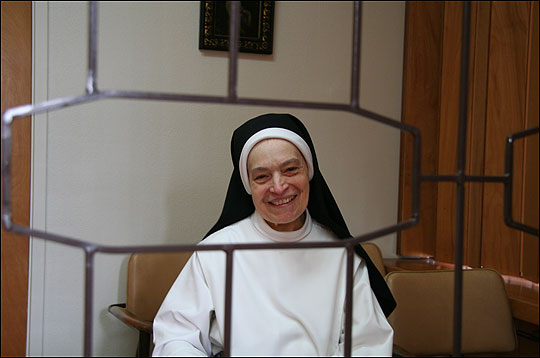 Sister Mary Dominic is one of 22 cloisered nuns living at the Monastery of the Angels.

In a city that's so known by glitz, glamour, flash and consumption, there's an unexpected spot that venerates humility and commitment. The Monastery of the Angels is a community of 22 Dominican nuns who live cloistered lives within sight of that huge Hollywood sign that winks from the hills over the city. We're just outside their simple, stucco-walled monastery now where they spend whole days in prayer, by the way, make pumpkin bread, too, that they sell to the public.

We're going to step inside and speak with Sister Mary Dominic who's been in this monastery for 45 years. She has to speak with us from the other side of an iron grill partition that symbolizes her separation from the world.

MARY DOMINIC: Our job is really to - for prayer and sacrifice for the world, really; that's - and so what - we pray, not only for ourselves and our own salvation, but the whole world.

And we were founded in, actually, 800 years ago. This is our 800th anniversary this year.

SIMON: What led you into this life, Sister?

DOMINIC: Well, this life is a vocation, so all I could say is that a vocation is a call, and a call is the call from the Divine, so it's the Lord that led me into here, and no one else, I'm sure.

SIMON: You know vocations are declining and that the...

DOMINIC: We absolutely know that. It's a shame that the idea of being committed is difficult for some people today because they have so many choices, so many options, whereas, in our life, you have to come to a point that you say, I'd like this forever. I'd like this until I die, and...

DOMINIC: And then it's very difficult, although there is a long time to make that decision. It's at least six years - five, six years, so that there's really no reason to say I don't know the life when the time comes to make the final vows.

SIMON: I actually - I'm not going to ask you if you ever get lonely because I'll accept your relationship with God you don't, but do you ever get restless and I mean just restless that you want to walk to the corner.

DOMINIC: Yes, there are times when I might think of what is my family doing at this moment...

DOMINIC: ...but not that I say I should be outside with them necessarily at that time, you know? It would be a time when I would be maybe perhaps offering my prayer even more intensely when that - when they come to my mind, you know, it could be something like that - or maybe something that is occurring in the world that maybe, if I were there, I could be a help.

DOMINIC: Well, I - then that's when I would turn to the Lord all the more and say, you're the greatest help that they can have. You take care of them at this moment.

SIMON: You realize we're living in a world where people might respect your dedication and your commitment, but find it difficult to understand what just prayer accomplishes. I mean, they understand the nun who teaches, the nun who's the community organizer, but prayer.

DOMINIC: It's a difficult thing to speak on, but that is something so fundamental to each person. Because within you, you know that there is something more important in this life than just going to school, going to work, eating. There must be a purpose for this life, and that's what prayer is. It's just that recognizing that he is there for us at every moment of the day no matter what, whether there's tragedy, whether it's a jubilation or whatever, but he's there always. And that recognition, that is prayer.

SIMON: So he's here even in Hollywood.

DOMINIC: Absolutely, and he loves Hollywood, too.

DOMINIC: Thank you for coming, and don't forget, this is our 800th anniversary. Bye.