New Orleans' tiny Preservation Hall has presented traditional jazz for more than 40 years. The hall is more famous than the musicians who play there, but the Preservation Hall Jazz Band continues to attract music lovers at home and to its concerts around the world. 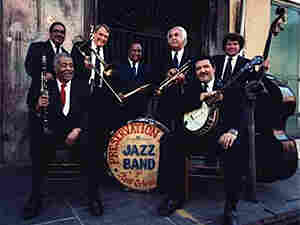 "The word preservation's a little deceptive because it gives the impression that it's something that's in the past and isn't necessarily alive or [doesn't] exist anymore," Ben Jaffe, the band's bass player and the hall's co-director, tells NPR's Bob Edwards. "New Orleans jazz is something that's very much alive and vibrant and every time it's played it's not a recreation of the past but something very contemporary."

Jaffe visited NPR's Studio 4A as part of the Preservation Hall Hot Four, a small ensemble that's part of the big band.

In 1961, Jaffe's parents bought a French Quarter art gallery and converted it into a music venue. Some of the gallery paintings still hang on the walls of the small room, where about 70 people at most can squeeze in. Most of the audience must stand because there are few seats -- just a couple of benches and cushions on the wooden floor.

The experience for the band members is just as captivating. Trumpet player John Brunious, who has played jazz for 53 years, says he still hears the music the same way he did when he was a child. "It really doesn't change," he says. "In my mind -- in my ear -- the music is the truth and it can only be played truthfully..."

Jaffe and Brunious were joined in Studio 4A by banjo player Don Vappie and pianist Rickie Monie.