Accessibility links
Bioartists' Flesh Sculptures Draw Fans and Critics A group of artists is making the evolutionary leap to the next medium: life. Bioartists create by engineering living tissue and even living beings. They've grown and eaten a steak from frog tissue, and created a rabbit that glows in the dark. Now they're teaching others to do the same. 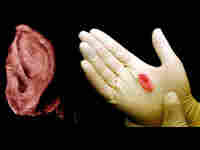 Bioartists Ionat Zurr and Oron Catts have grown a replica of an ear with living human skin cells. Courtesy of SymbioticA hide caption 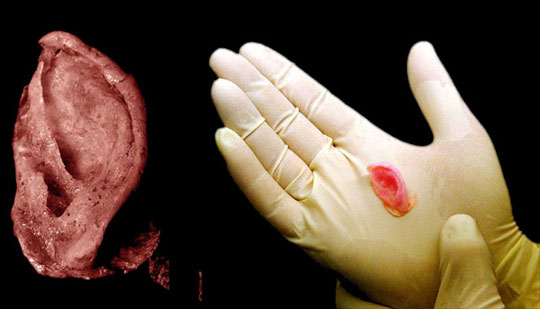 Bioartists Ionat Zurr and Oron Catts have grown a replica of an ear with living human skin cells.

Stem cell experiments are no longer limited to researchers. A group of artists is making the evolutionary leap to the next medium: life. Bioartists create by engineering living tissue and even living beings, sometimes with controversial outcomes.

At the forefront of this movement is SymbioticA, a bioart laboratory funded by the University of Western Australia. Run by Ionat Zurr and her husband Oron Catts, the couple is continually pushing the boundaries of art; they've grown a replica of an ear with living human skin cells, miniature wings with the flesh of a pig and mouse cells in the shape of a tiny leather jacket.

Their innovative work has generated substantial interest and they're now also teaching others to do the same. During a recent workshop, hosted by the Machine Project in Los Angeles, Zurr guided a small group of aspiring bioartists through a "painting" exercise. First, Zurr sawed open the femur of a freshly-slaughtered cow. After choosing which cells she wanted, she "painted" them onto a three-dimensional scaffolding made of degradable polymer — a type of plastic. Over many weeks, the cells will grow over whatever shape the scaffolding takes, turning into a living sculpture of skin.

One of SymbioticA's recent projects entailed growing frog tissue in the form of a steak. At the end of the exhibit, Catts fried it up and ate it. The flavor left something to be desired.

"The polymer didn't degrade completely, and the muscle cells, we didn't exercise them, so they tasted like jelly. It was like eating jelly on plastic," Catts says.

Why on earth would you do this? Many bioartists say it's to put a spotlight on how the biotech industry is pushing and sometimes breaking ethical boundaries. But animal rights advocates, ethicists, and artists are criticizing bioartists for doing exactly the same thing.

"I feel like artists at this point are mirroring what's happening. I don't feel they are encouraging shifts to new levels of consciousness," says Carol Gigliotti, an Arts Professor at the Emily Carr Institute in Vancouver. Gigliotti sees hypocrisy in some of SymbioticA's work, and would rather see bioartists use non-animal products.

There are also legal issues. Growing tissue from bones picked up at your local butcher may be legal if local land-use laws allow such activity, but working with live animals gets more complicated according to Stanford Law Professor Hank Greely.

"Whether this art counts as research — who knows," Greely says. "The legal situation is murky in several directions, and I think it's highly likely that not all artists are carefully advised about it."

This became evident in 2000, when artist Eduardo Kac commissioned a French laboratory to insert the gene that makes jellyfish glow neon colors into the zygote of a bunny rabbit. After several trials, "Alba," a bioluminescent rabbit was born, glowing green under a blue light.

Numerous parties — including fellow bioartists — took issue with the project.

"Nobody's seen the brothers and sisters of Alba who didn't make it. For instance, the ones who didn't come out green, were killed right away. They just put them on bleach or ice or something like that, because they weren't green," says Adam Zaretzky, a bioartist who works in New York.

"If there's anybody out there that wants a hole drilled in their head and a pineal extender grafted to their pineal gland, let me know."