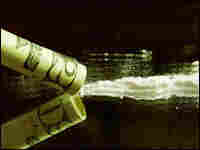 Since the mid 1980s, federal guidelines have imposed harsher penalties for dealing crack cocaine (also known as cocaine "base"), than for dealing powder cocaine, a more potent form of the drug. It's a discrepency that many lawyers and civil rights activists have argued unfairly punishes African-Americans, who are most likely to be convicted for peddling crack cocaine.

But yesterday, the Supreme Court issued a ruling giving federal district judges more discretion in how they arrive at sentences in crack cocaine cases.

The ruling comes just a month after the U.S. Sentencing Commission changed sentencing guidelines in an effort to reduce the disparity. The commission will now decide whether to make that change retroactive, which could shorten prison terms for nearly 20,000 inmates — an estimated 10 percent of the entire criminal population in federal prison. 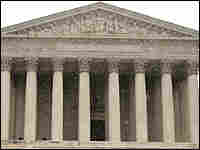 The Supreme Court on Monday said judges can use their discretion in imposing sentences in cases involving crack cocaine. Tim Sloan/AFP/Getty hide caption

The Supreme Court on Monday cleared the way for judges to use their discretion in imposing sentences that deviate from federal sentencing guidelines, ruling that lenient sentences were appropriate in a case involving crack cocaine and another involving Ecstasy.

The 7-2 decision in the crack cocaine case was a victory for blacks defendants, who have been disproportionately charged under harsher laws for crack offenses.

The U.S. Sentencing Commission recently changed the guidelines to reduce the disparity in sentences for crack and powdered cocaine offenses, with new guidelines taking effect Nov. 1. The commission is due to vote Tuesday on whether to make the new sentence ranges retroactive.

If the change is made retroactive, it could cut the prison sentences of up to an estimated 19,500 federal inmates convicted of crack offenses.

The crack case decided Monday involved Derrick Kimbrough, a black veteran of the 1991 Iraq war. Kimbrough was sentenced to 15 years, even though federal sentencing guidelines called for him to receive from 19 to 22 years. The judges decided the more lenient sentence was appropriate.

"In making that determination, the judge may consider the disparity between the guidelines' treatment of crack and powder cocaine offenses," Justice Ruth Bader Ginsburg said in the majority opinion.

In a separate sentencing case that did not involve crack cocaine, the court also said judges have discretion to impose more lenient sentences than federal guidelines recommend.

The cases are the result of a decision three years ago in which the justices ruled that judges need not strictly follow the sentencing guidelines. Instead, appellate courts would review sentences for reasonableness, although the court has since struggled to define what that term means.

The guidelines were established by the Sentencing Commission, at Congress' direction, in the mid-1980s to help produce uniform punishments for similar crimes.

Kimbrough's case did not present the justices with the ultimate question of the fairness of the disparity in crack and powder cocaine sentences. Congress wrote the harsher treatment for crack into a law that sets a mandatory minimum five-year prison sentence for trafficking 5 grams of crack cocaine or 100 times as much cocaine powder. The law also sets maximum terms.

Seventy percent of crack defendants are given the mandatory prison terms.

Kimbrough is among the remaining 30 percent who, under the guidelines, get even more time in prison because they are convicted of trafficking in more than the amount of crack that triggers the minimum sentences.

"A reviewing court could not rationally conclude that it was an abuse of discretion" to cut four years off the guidelines-recommended sentence for Kimbrough, Ginsburg said.

In the other case, the court, also by a 7-2 vote, upheld a sentence of probation for Brian Gall for his role in a conspiracy to sell 10,000 pills of Ecstasy. U.S. District Judge Robert Pratt of Des Moines, Iowa, determined that Gall had voluntarily quit selling drugs several years before he was implicated, stopped drinking, graduated from college and built a successful business. The guidelines said Gall should have been sent to prison for 30 to 37 months.

"The sentence imposed by the experienced district judge in this case was reasonable," Justice John Paul Stevens said in his majority opinion.