Accessibility links
Senate to Vote on Farm Subsidies The Senate votes Tuesday on amendments to a new farm bill, which includes billions of dollars in subsidies for farmers and will set the country's agriculture policy for the next five years. Robert Reich, former labor secretary, and Sen. Charles Grassley (R-IA) discuss why the federal government subsidizes farming.

Senate to Vote on Farm Subsidies

What do you think of farm subsidies? Talk about it on "Blog of the Nation." hide caption

The Senate begins voting Tuesday on amendments to a new farm bill, which includes billions of dollars in subsidies for farmers and will set the country's agriculture policy for the next five years. Robert Reich, former labor secretary, and Sen. Charles Grassley (R-IA) discuss why the federal government subsidizes farming.

Why You Should Care About the Farm Bill 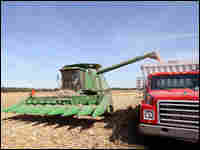 The farm bill affects everything from what we eat to how we trade with other nations. Scott Olson/Getty Images hide caption

Breaking Down the Bill

With its less-than-scintillating name, the farm bill is not the type of legislation that makes Americans sit up and take notice. But perhaps it should.

First enacted during the Great Depression, the bill is a sweeping spending plan for most things agricultural. It authorizes subsidies to farmers and food stamps for the poor, and affects everything from what we eat to how we trade with other nations.

The bill comes up for reauthorization every five years, although it sometimes takes Congress an extra year or two to finish its work. The last time, in 2002, lawmakers were preoccupied with the newly begun war in Afghanistan, and the looming war in Iraq; the bill garnered little attention outside the so-called farm states.

This time around, sparks are already flying.

In late July, the House passed its reauthorized version of the bill — a massive, $290 billion spending plan that would keep existing agricultural subsidies in place through 2012, while also adding new ones: for growers of specialty crops, the settlement of discrimination suits, and an expansion of the food stamp program, among other things.

The politics surrounding the farm bill are complicated and often do not follow party lines. Regional interests dominate, as legislators from Louisiana defend subsidies for rice farmers, while those from low-income districts support funding for food stamps. This year, however, partisan controversy broke out over how the House bill would pay for these programs: Democrats proposed eliminating a tax loophole that affects how foreign companies with U.S. subsidiaries report profits. That provoked Republican opposition. The measure still passed, but on a 231-191, mostly party-line vote. Nineteen Republicans voted with the majority; 14 Democrats voted against.

The Senate Agriculture Committee takes up its version of the bill this week, and it is expected to take a somewhat different tack. Agriculture Committee Chairman Sen. Tom Harkin (D-IA) has advocated a "fairer" subsidy system, with stricter limits on subsidies for the largest farms and more "green" payments to farmers who farm in ways that benefit the environment.

Critics of the farm bill have called on the Senate to slash traditional crop subsidies by nearly one-third, while spending more on biofuels and food stamps. And Senate Republicans have also raised objects about eliminating the tax loophole. White House officials even threatened a veto, calling the House version of the bill fiscally irresponsible and too generous to farmers.

Here is a look at the farm bill's key elements and the controversies involved in them.

In a Nutshell: The farm bill includes many programs that hand out payments to farmers. Some payments are triggered by falling farm prices; others are simply based on the amount of land that a farmer owns. The House measure includes subsidies for 25 crops. Some of the largest payments go to growers of corn, soybeans, rice, and cotton. There also are high tariffs to protect domestic sugar producers. In recent years, farmers have received anywhere from $10 billion to $20 billion each year.

Supporters Say: Subsidies are necessary to ensure that American farmers can survive bad years and compete with farmers in other countries.

Critics Contend: Subsidies are an example of unnecessary pork-barrel spending that's driven by the political influence of the farm lobby. Critics also say they distort the farm economy, promoting the growing of some crops, such as corn and rice, over others that receive very little government support, such as vegetables or cattle grazing.

In a Nutshell: Anyone who owns land can qualify for subsidies, whether they are farming the land themselves or renting it to others. Because many commodity payments are based on the amount of land planted, or the size of the expected harvest, large farms get most of these payments. Under the current farm bill, farmers earning more than $2.5 million a year aren't eligible for payments, but that limit is often circumvented. Farmers can set themselves up as a corporation, for instance, which is not subject to those limits. Under the House version of the bill, farmers who earn more than $1 million a year will not be able to receive subsidies. More importantly, corporations will be required to designate living, breathing people as the beneficiaries of these payments.

Supporters Say: The House bill represents a fair compromise. Setting a lower limit, they argue, would be unfair to farmers who sometimes make very large profits in one year, only to lose large amounts the following year.

Critics Contend: The House-passed farm bill is a continuing subsidy to big agricultural operations that don't need it. The White House, for instance, had proposed restricting subsidies to farmers earning less than $200,000 a year.

In a Nutshell: These programs encourage and assist farmers and ranchers to protect vulnerable land, such as wetlands, stream banks and native grasslands. Farmers can receive payments for taking cropland out of production in order to preserve soil, protect streams and provide habitat for wildlife. They can also receive payments for farming in ways that benefit the environment. These payments amount to almost $3 billion each year, and the House bill proposes to increase them modestly.

Supporters Say: Environmentalists argue that conservation payments are the best kind of farm subsidy, because they encourage farmers, who control vast sections of the country's land and water, to handle it as a public resource. Many farmers are happy to take measures to protect the nation's waterways and to restore wildlife habitat, as long as they can be paid to do it.

Critics Contend: Some of these programs aren't well targeted, and don't deliver as many benefits as hoped. Some farmers don't like the idea of taking land out of production, fearing it can hurt the broader rural economy because it cuts demand for fertilizer and other farm supplies.

In a Nutshell: This program accounts for most of the money in the farm bill. It provides financial assistance for low-income families to purchase food. The House version renames the program the "Secure Supplemental Nutrition Assistance Program." It would eliminate paper stamps in favor of an electronic transfer system.

Supporters Say: The switch to electronic processing will save the program from counterfeiting and fraud. The House bill also raises the minimum benefit for recipients and increases funding for the program that provides fresh fruits and vegetables to schools. The House bill pays for this — and other spending increases in the bill — by eliminating a tax loophole that allows U.S. subsidiaries of foreign-owned companies to avoid paying some taxes by shifting their profits to other countries.

Critics Contend: The bill is too costly; what's more, eliminating the tax loophole amounts to one of the largest tax increases in history.

In a Nutshell: The bill authorizes the Food for Peace program, under which the government buys food commodities in the U.S., turns them over to private aid organizations such as Catholic Relief Services, and pays to ship the food to countries where it's needed. The U.S. spends nearly $1 billion each year on Food for Peace.

Supporters Say: The program is a humanitarian success story. The U.S. is the world's largest donor of food, and Food for Peace shipments have kept people from starving. That's because of political support from farmers, shippers and aid organizations, all of whom benefit.

Critics Contend: The program wastes much of its money. Under current rules, food must be bought in the U.S. and shipped abroad, even though studies show that, in many cases, the food would be cheaper and get to its destination much more quickly if the U.S. bought it closer to where it's needed. In some cases, private aid groups sell the food in foreign markets to raise cash. Critics say that's terribly inefficient, compared with simply giving aid organizations cash in the first place.