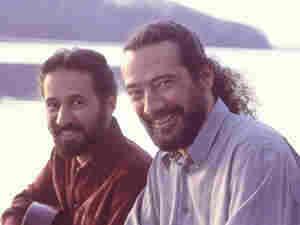 Brothers Sergio and Odair Assad of Brazil began playing guitar together more than 40 years ago. Today, they're legends of the classical-guitar world, renowned for their unified sound and their adventurous repertoire. The Assad brothers have just released their seventh CD, Jardim Abandonado.

The guitar came to classical music as an interloper of dubious pedigree. Purists wondered: Is Bach really Bach when edited to accommodate the limitations of a six-string solo instrument? Sergio and Odair Assad fly past all that. For one thing, two guitars playing together have the range, and available fingers, to tackle classical masterpieces without much editing. But more to the point, the Assads remain true to their Brazilian heritage — more about expression of spirit than any sort of purity.

Sergio and Odair Assad develop four short compositions by bossa nova icon Antonio Carlos Jobim, including "Trem para Codisburgo," and they all sound more fit for the concert hall than the jazz lounge.

The Assad brothers' vast repertoire even extends to family. In amongst Gershwin, Jobim and Debussy, there are three elegant pieces by Sergio's daughter Clarice. And Sergio himself contributes the CD's most electrifying composition, "Tahhiyya li ossoulina."

Sergio and Odair Assad came up in the wake of Andres Segovia, widely credited with legitimizing guitar as a classical instrument. With their maturity and dazzling technical skills, the Assads easily qualify as masters in the house that Andre built. But happily, they aim for more. By bringing Latin-American music, jazz, original compositions and any other thing they please into the mix, they remain interlopers — loyal more to the humble, shape-shifting guitar than to any musical genre.

Sergio and Odair Assad on Nonesuch